In a meeting of the EU Parliament’s Civil Liberties Committee (LIBE) yesterday, Vice Chair Jan Philipp Albrecht, Green MEP and Rapporteur to the General Data Protection Regulation, provided a report on the trilogue negotiations around the GDPR.

Chapter V is done, he said, and chapters II, III, and IV are largely done.

“My impression is that we managed to get agreement on, I would estimate, 70 to 80 percent of the text,” he said, “but of course there are still issues, especially the more political issues, that we have to come back to.”

These remaining bits include:

• The form and conditions for individuals to give consent.

• How far and in which ways the principals of data minimization are defined and regulated in the text.

• The concrete formulations for informing individuals in a transparent manner. There are ongoing negotiations on the use of some kind of standardized symbol set. 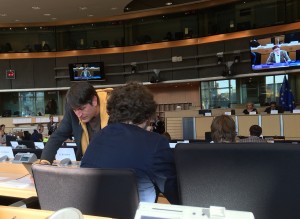 However, said Albrecht, “I still see very it as very realistically possible that we conclude before the end of the year, as we envisaged. The open questions will be revisited through November, but we’ll also move forward on VI and VII.”

The next big issue to be tackled, he said, is “how we get a better and more consistent enforcement. We will be able to conclude that quite soon.” Those concerned with the one-stop shop will be watching this closely.

Is there anything that could derail the progress? A dark horse to muck things up is the Directive on Data Processed in Criminal Proceedings, for which the Council has just recently released a general approach and begun another set of trilogue meetings.

And the Directive is still to be debated in trilogue. “We have our own problems,” said Lauristin, “in our own area with data protection, privacy protection, human rights issues and the interests of national security … It’s not just the United States, but also inside the member states.”

A29 Working Party To Convene Special Plenary on Thursday To React to Safe Harbor Ruling With the echoes of Tuesday’s European Court of Justice Safe Harbor decision still rippling through the hills of the privacy community, it was no surprise this morning to find a standing-room-only crowd at Denton...
END_OF_DOCUMENT_TOKEN_TO_BE_REPLACED queue Save This

Without doubt, Tuesday’s historic decision by the Court of Justice of the European Union (CJEU) invalidating the EU-U.S. Safe Harbor Agreement has ruffled a lot of feathers in the business community, while reenergizing privacy advocates in the EU and abroad. Now that the main agreement allowing the ...
END_OF_DOCUMENT_TOKEN_TO_BE_REPLACED queue Save This

Discussion among leading privacy thinkers about the European Court of Justice decision on Safe Harbor invalidity. Recorded October 6....
END_OF_DOCUMENT_TOKEN_TO_BE_REPLACED queue Save This

Getting to Accountability, Nymity's Way

The Nymity Privacy Management Accountability Framework, "an industry-neutral listing of 150-plus privacy management activities within 13 privacy management processes," aims to help privacy pros structure and track both where the privacy program currently stands and where it aims to go. At a recent t...
END_OF_DOCUMENT_TOKEN_TO_BE_REPLACED queue Save This