The resounding message: What took so long?

“It’s important to highlight that something went wrong here,” said German Green MEP Jan Philipp Albrecht, Rapporteur to the General Data Protection Regulation and vice chair of the LIBE Committee. “If the Court has to draw a judgment that basically puts in question the whole scheme of Safe Harbor after 15 years of its application, this doesn’t shed a very nice light on the European Commission, and I think it would be up to the Commission now to acknowledge that something in their field of responsibility went wrong.”

“Safe Harbor, everybody knew that it was faulty,” she said. “It was dead a long time ago. We’ve been pulling a dead horse for a long time. This body has been calling for a repeal of Safe Harbor repeatedly.” 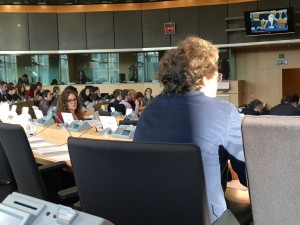 Thus, she also said she has little sympathy for those calling for time to digest the ECJ ruling. “Safe Harbor has been under attack for many, many years,” she said. “I don’t think the argument that we need a lot of time to deal with the fallout of this is very valid.”

MEP Birgit Sippel, a Social Democrat from Germany, was even more blunt: “Why the hell was it necessary to have Max Schrems and the Irish Court so that the ECJ could take this decision? Why the hell was it necessary? For years we’ve been telling the Commission this not a safe harbor for data, it’s not a safe harbor for privacy. We as a Parliament shouldn’t have to work this way. We shouldn’t have to go to the Court. The Commission should have taken our concerns seriously many years ago.”

Along with others, in ‘t Veld emphasized that she wasn’t looking to cut off data transfer to the United States. “We don’t’ want a fence around the Internet,” she said. “We don’t want to cut ourselves off from the benefits of an open economy and Internet.” However, she noted, there seems to be a different set of rules for the United States and every other country.

“We keep hearing that we have common values,” she said. “Let’s see some common values.” She and others called on the United States to get its legal house in order regarding mass data collection, or a new Safe Harbor would be impossible.

Further, wondered German MEP Cornelia Ernst, of the Nordic Green Left, “there are other agreements that have been signed with regards to the Commission,” referencing binding corporate rules and other mechanisms of adequacy with other countries. “How can the DPAs really deal with those and control them? How is it possible to monitor and supervise them? What legal tools are there? Do we need someone like Max Schrems in these cases? It’s an important question when we look at the effects on the other agreements that have been signed.”

For the Commission’s part, Head of Unit for Data Protection Bruno Gencarelli said, “We see this as a confirmation of the European Commission’s approach to seek stronger rules, a stronger framework” by which to transfer sensitive data to the United States. “Our priorities as a Commission are the protection of data moving across the Atlantic and clarity on how to carry out those transfers … We have started and will continue to work closely with national data protection authorities to ensure that the ruling is enforced in a uniform way to ensure that data transfers are made with appropriate safeguards.”

Here, in ‘t Veld interjected: “I’m a bit surprised. This is what they’ve been saying for two years. But things have changed. The talks on a successor to Safe Harbor have been taking place on the basis of 13 points, but what the Commission should have done this week is check if those 13 points would then meet the criteria set by the court ruling. That’s what I would like to hear. I don’t want to hear that you’ve been talking for two years. We know that. What has changed?

“I’m getting a bit frustrated,” she said. “This is a really good moment to change strategy.”

This produced a round of MEPs knocking on their desks by way of applause.

However, said Gencarelli, “I don’t have anything to add at this stage. The Commission identified the issues. We have been working on this issue and have identified the weaknesses of the framework.”

The Parliament, and the world at large, will be watching closely to see how they address those weaknesses.

A29 Working Party To Convene Special Plenary on Thursday To React to Safe Harbor Ruling With the echoes of Tuesday’s European Court of Justice Safe Harbor decision still rippling through the hills of the privacy community, it was no surprise this morning to find a standing-room-only crowd at Denton...
END_OF_DOCUMENT_TOKEN_TO_BE_REPLACED queue Save This

Discussion among leading privacy thinkers about the European Court of Justice decision on Safe Harbor invalidity. Recorded October 6....
END_OF_DOCUMENT_TOKEN_TO_BE_REPLACED queue Save This

Without doubt, Tuesday’s historic decision by the Court of Justice of the European Union (CJEU) invalidating the EU-U.S. Safe Harbor Agreement has ruffled a lot of feathers in the business community, while reenergizing privacy advocates in the EU and abroad. Now that the main agreement allowing the ...
END_OF_DOCUMENT_TOKEN_TO_BE_REPLACED queue Save This

The Court of Justice of the EU (CJEU) has rocked the privacy community with its response to an inquiry made last June by then-Irish High Court Judge Gerard Hogan in a case filed by Austrian student Max Schrems. What happens next for the Schrems case, and what are the implications of the recent Welti...
END_OF_DOCUMENT_TOKEN_TO_BE_REPLACED queue Save This

2
"Uncertainty" is the word of the day in privacy circles Max Schrems has won. In a closely watched case, the European Court of Justice (ECJ) released a judgment this morning agreeing with his argument that the PRISM mass surveillance program unveiled by Edward Snowden makes the European Commission’s...
END_OF_DOCUMENT_TOKEN_TO_BE_REPLACED queue Save This