"The amount of activity with state data privacy legislation during the 2022 legislative cycle was, at times, overwhelming. Lawmakers in 29 states and the District of Columbia either introduced data privacy bills or had them carry over from the 2021 legislative session. Twenty-three states held committee hearings. Fourteen states passed bills out of committee. Seven states passed a bill through one chamber. Two states passed laws," Husch Blackwell Partner David Stauss, CIPP/E, CIPP/US, CIPT, FIP, PLS, said in this IAPP article taking stock of the U.S. state privacy landscape.

As the legislative interest in data privacy among the states grows, so does the concern regarding a patchwork of laws for companies to comply with. However, it might not be as scary as it appears. 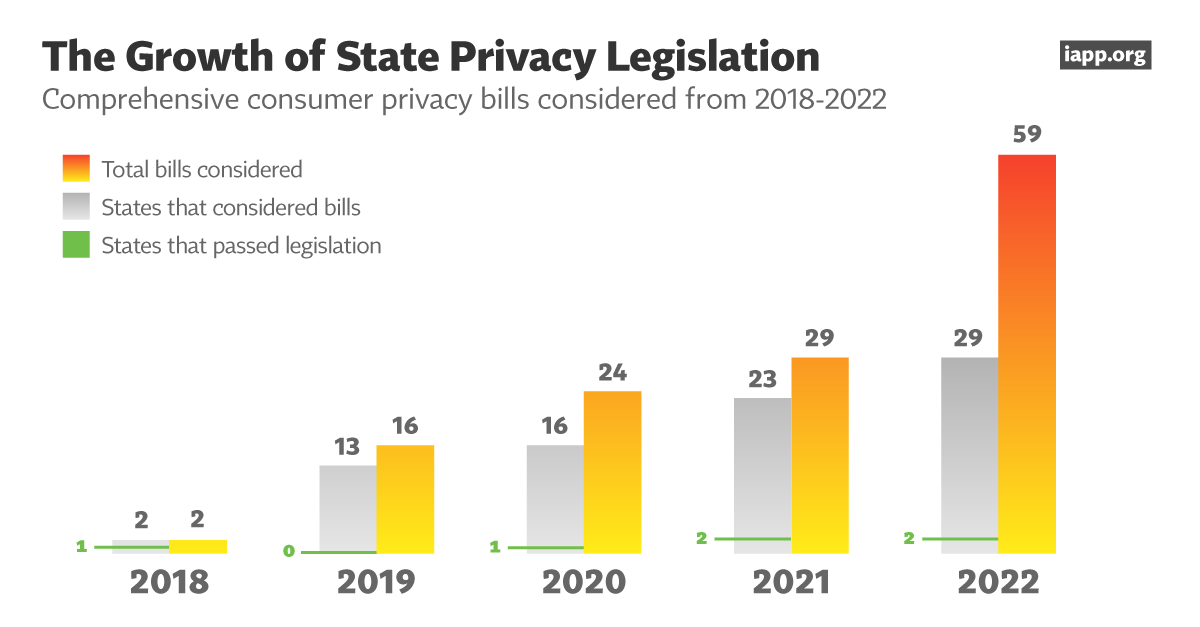 "While there is widespread and legitimate concern about the patchwork of privacy laws that could emerge as more states pass comprehensive legislation, these bills aren’t completely dissimilar from one another," former IAPP Westin Research Fellow and Crowell & Moring Associate Sarah Rippy said in an IAPP piece in September 2021. "Notwithstanding some significant differences, the structure of new state bills is almost always modeled after previous bills from other states … most often model their legislation after are the California Consumer Privacy Act/California Privacy Rights Act and the Washington Privacy Act."

This tool tracks proposed comprehensive US state privacy bills from across the country to aid our members' efforts to stay abreast of the changing state-privacy landscape....
END_OF_DOCUMENT_TOKEN_TO_BE_REPLACED queue Save This

While the wait is on for a federal privacy law, many states have taken matters into their own hands and are in the process of or have already passed state data protection laws. The IAPP has been keeping track of individual state privacy legislation, and we regularly update this topic page with our c...

This chart, published by Thompson Hine, outlines the range of data protection rights and obligations under U.S. state data protection laws that go into effect in 2023....
END_OF_DOCUMENT_TOKEN_TO_BE_REPLACED queue Save This

CCPA enforcement action: A case study at the intersection of privacy and marketing

Beauty retailer Sephora was fined $1.2 million by California Attorney General Rob Bonta and is the first-ever California Consumer Privacy Act enforcement action. At the heart of the matter is Sephora allegedly misrepresenting its actions to California consumers (saying that it did not sell consumer ...
END_OF_DOCUMENT_TOKEN_TO_BE_REPLACED queue Save This

In 2022, lawmakers in 29 states and the District of Columbia either introduced data privacy bills or had bills carry over from the prior legislative session. Only two comprehensive privacy laws passed when the dust settled, but there was much to be learned from the bills each state presented regardl...
END_OF_DOCUMENT_TOKEN_TO_BE_REPLACED queue Save This