This year, almost as many of the 370 respondents to the survey hailed from the European Union as from the United States. This reflects the growth of the privacy and data protection profession in the EU in reaction to the GDPR. The GDPR has driven growth in privacy-pro ranks in the U.S., as well.

And yet, have we seen a leveling-off of business investment in privacy post-2018? Budgets and staffing are flat this year, even though GDPR compliance has not yet been widely achieved.

One GDPR responsibility most have met, in response to Article 37, is to appoint a data protection officer — nearly three out of four organizations subject to the regulation have appointed a DPO, whether obligated by the law or not. Indeed, one-third of all survey respondents hold the DPO title. Among those DPOs from the EU, most (69%) hold the top privacy role for their firm. They often have direct reporting lines to the board of directors, as well.

High on the list of privacy concerns for the board — following data breach — is legal and regulatory compliance, especially with the GDPR. The regulation has had such a massive impact on data management practices globally that it has become, in many respects, the de facto global standard for privacy. Compliance with privacy laws and regulations tops privacy professionals’ priority list — 41% of respondents name it as their highest priority. GDPR compliance is far and away the top priority for those in the EU (58% chose it), whereas only 11% of U.S. respondents selected it as number one. On the flip side, 46% of U.S. respondents named “compliance (beyond the GDPR)” as their highest priority, with only 30% of EU respondents selecting it.

Privacy pros in the U.S. are less likely than their EU counterparts to be DPOs and more likely to have multiple privacy responsibilities beyond GDPR compliance. They report working on vendor management and even “ethical decision making” more often than those in the EU. 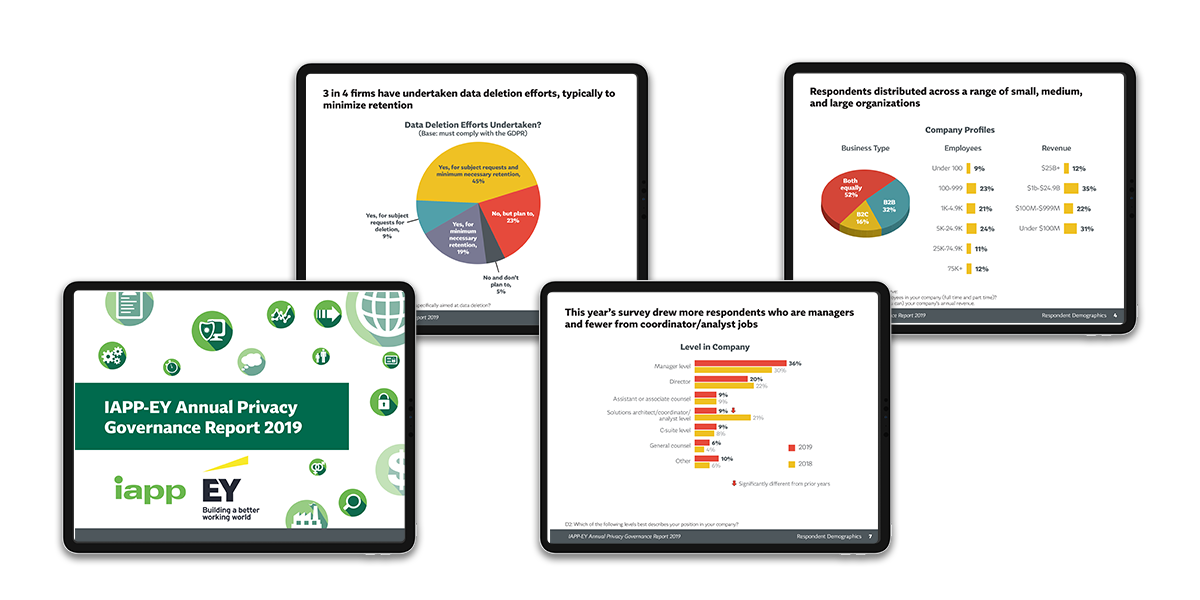 Other major takeaways from this year’s report:

Nearly half of all respondents (45%) expect privacy to bring them new opportunities, while another 38% are at the peak of their careers.

Published: October 2018 Click To Access Report Last year, the 2017 "Privacy Governance Report" welcomed the arrival of the EU General Data Protection Regulation, both the compliance efforts and the corresponding angst over how to accomplish a list of daunting, if not impossible, tasks. One year ...
END_OF_DOCUMENT_TOKEN_TO_BE_REPLACED queue Save This

Published: October 2017 Click To Access In 2016, privacy professionals across the globe got an assignment: help their organizations prepare for the European Union’s General Data Protection Regulation before it comes into force on May 25, 2018. The 2017 IAPP-EY Privacy Governance Survey shows the...
END_OF_DOCUMENT_TOKEN_TO_BE_REPLACED queue Save This

Published: September 2016 Click To View (PDF) For privacy and data protection professionals, 2017 may prove to be a watershed year. The leading change agent is the ramp up in preparations for the European Union’s new General Data Protection Regulation, which enters into force in May 2018 to repl...
END_OF_DOCUMENT_TOKEN_TO_BE_REPLACED queue Save This

Published: September 2015 Click To View (PDF) Privacy is a thriving industry in rapid growth. Still nascent a decade ago, it now employs thousands of professionals with diverse backgrounds active across the gamut of organizational structures, from tech start ups through regulated banks and healt...
END_OF_DOCUMENT_TOKEN_TO_BE_REPLACED queue Save This

Published: March 2016 Click To View (PDF) As a more mature field, information security has long enjoyed larger budgets and more staff than information privacy. As privacy teams have matured and grown, however, their budgets are beginning to be substantive. How do information security and privacy...
END_OF_DOCUMENT_TOKEN_TO_BE_REPLACED queue Save This