Privacy impact assessments are used by organizations large and small to reduce risk, maintain compliance and establish accountable frameworks for protecting sensitive data and meeting regulatory standards. For organizations exercising PIAs, or thinking about implementing them, there has been scant data available to see how other organizations conduct their PIAs.

Plus, there are very real obstacles for getting those PIAs completed. For example, how do you budget for them? How many employees will it take? And how long, for that matter?

Well, PIA benchmarking data is now available to help answer some of these questions. In a webinar on Thursday, TRUSTe Director of Product Management & Principal Consultant Ray Everett revealed the results of an online survey of 203 individuals who are closely involved in their organizations' PIAs. All of those surveyed were from large organizations across the globe.

Everett said there has been very little available insight into industry best practices and a lack of consistency in terminology and process when conducting PIAs. Plus, more information on how industry conducts their PIAs may help others budget and plan for their own assessments. Significantly, budget and lack of time are the two biggest reasons companies do not conduct privacy assessments. 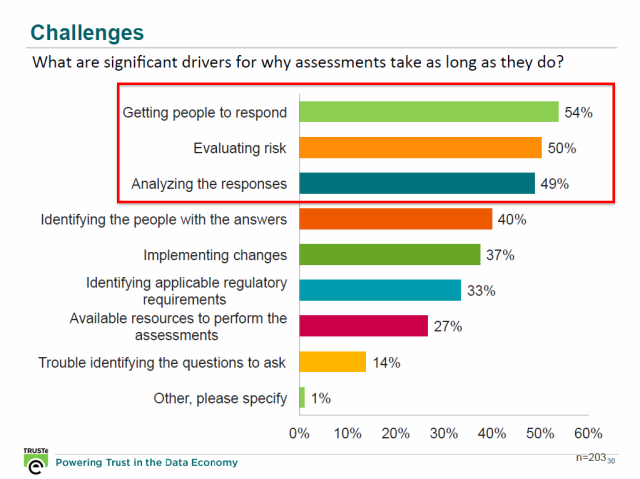 The survey was conducted online in early December, 2014, and targeted organizations with at least 1,000 employees. Nearly three-quarters of the organizations surveyed, though, have at least 5,000 employees. What’s more, industry verticals were fairly represented and included the financial, high tech, healthcare, manufacturing and retail sectors. However, nearly half of those surveyed were from the high tech and financial services sectors.

There was also a broad range of reasons for conducting PIAs. The most common reason stemmed from internal annual reviews, followed by a regulatory change, then product change, annual certification and finally a merger and acquisition.

Interestingly, the survey also included the top reasons impact assessments are slowed down within an organization. The biggest reason? You might have guessed it: Getting your fellow employees to respond. The second biggest driver is evaluating risk, followed closely by the time taken to analyze responses (when you finally get them!).

Nearly 70 percent of those surveyed said the biggest reason more PIAs are not conducted is from budgetary considerations while more than half said the privacy team’s time is also an obstacle.

If you're looking for resources on how to conduct a PIA in your organization, find them here in the Resource Center.

TRUSTe has announced Lynda.com and Yodlee are the two latest companies to be awarded the APEC certification. They join IBM, Merck and Workday in having the designation. The APEC Privacy Certification allows companies that do business in APEC member countries to ensure their privacy management practi...
END_OF_DOCUMENT_TOKEN_TO_BE_REPLACED queue Save This

Accountability Is About Values

Over the past year, I reflected on why I have been doing privacy for nearly a quarter of a century. As privacy professionals, you and I do privacy because we believe people shouldn’t be afraid of being harmed by the digitization of their pathways through life. We do privacy so young adults may evolv...
END_OF_DOCUMENT_TOKEN_TO_BE_REPLACED queue Save This

In part four of the series "Ten Steps to a Quality Privacy Program," Deidre Rodriguez, CIPP/US, explores privacy impact assessments, which she calls key to privacy by design—or default. While there are foundational concepts that must be addressed, each organization may need to approach PIAs differen...
END_OF_DOCUMENT_TOKEN_TO_BE_REPLACED queue Save This

The use of privacy impact assessments (PIAs) looks set to grow exponentially, especially in Europe. A PIA Framework for Radio Frequency Identification (RFID), developed by industry, was endorsed by the Article 29 Data Protection Working Party in February, and the European Commission is expected to m...
END_OF_DOCUMENT_TOKEN_TO_BE_REPLACED queue Save This

After years of uncertainty in the wake of the U.K.'s vote in 2016 to leave the EU, there are finally sign posts for privacy pros to look to as both regions aim to secure cross-border data transfers through U.K. adequacy. In a massive trade agreement signed last Christmas Eve, both regions secured a ...
END_OF_DOCUMENT_TOKEN_TO_BE_REPLACED queue Save This