In the late 1960s, emerging surveillance technologies such as telephone tapping, electronic eavesdropping, hidden television eye monitoring and polygraph examinations, combined with the advent of the computer, reignited public concern over the preservation of privacy.

The magazines were soon to wonder, “Is privacy dead?”

These technological advances and concerns, coupled with brilliant foresight, prompted Dr. Alan F. Westin, then a professor at Columbia University, to create what would become known as a seminal work in the information privacy field, Privacy and Freedom. Rather than simply documenting and criticizing the spread of these practices, Westin’s 1967 book focused on providing a thoughtful definition of privacy followed by an in-depth discussion of the competing demands of privacy, disclosure and surveillance.

Lamentably, that seminal work has been out of print for some 40 years, with “new” copies on Amazon listed for as much as $227.

However, the IAPP has brought the book back into print, with a limited edition run of 1,000 hardcover copies, available for the first time at the 2014 IAPP Global Privacy Summit in Washington, DC.

Privacy and Freedom postulated how public and private authorities might ensure preservation of privacy as an important aspect of the American system of liberty amid evolving technology. Forty-seven years later, after extreme technological advancements including the development and evolution of the Internet, the book remains highly relevant and eerily prescient with today’s concerns surrounding government surveillance, Big Data, cloud computing, mobile devices, social networking and online marketing. 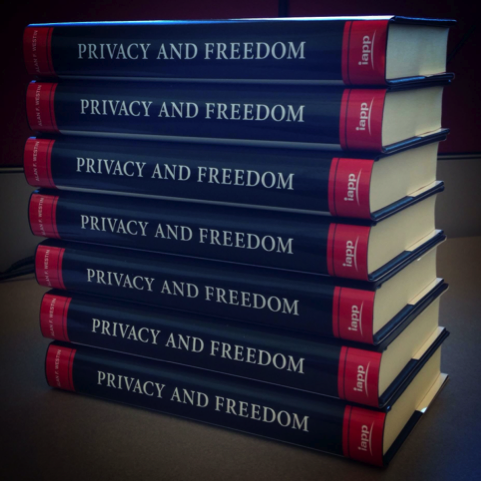 IAPP brings Westin's Privacy and Freedom back into print.

Westin’s book greatly expands upon the concepts put forth in Samuel Warren and Louis Brandeis’ initial work advocating a right to privacy. Privacy and Freedom was the first to provide a functional definition of privacy, a definition that has endured for the past 47 years. Proffering a control-based model, the text defines privacy as “the claim of individuals, groups or institutions to determine for themselves when, how and to what extent information about them is communicated to others.”

In a foreword to the text’s 2014 republication, privacy scholar and Indiana University Maurer School of Law Prof. Fred H. Cate notes that the U.S. Supreme Court, Federal Trade Commission and “Almost all data-protection laws adopted since 1967 have reflected (Privacy and Freedom’s) definition (of privacy), including the influential Guidelines on the Protection of Privacy and Transborder Flows of Personal Data adopted by the Committee of Ministers of the Organization for Economic Cooperation and Development (OECD) in 1980; the European Union’s Data Protection Directive adopted in 1995; and the Asia-Pacific Economic Cooperation (APEC) Privacy Framework adopted in 2004.”

While the book is nearly half a century old, it remains relevant despite the drastically different world we reside in today. Privacy and Freedom recognized the physical surveillance technologies stirring public interest in the late ’60s, but was also able to perceive, before the rise of personal computing and the birth of the Internet, the threats associated with information collection and database security:

“The issue of privacy raised by computerization is whether the increased collection and processing of information for diverse public and private purposes, if not carefully controlled, could lead to a sweeping power of surveillance by government over individual lives and organizational activity. As we are forced more and more each day to leave documentary fingerprints and footprints behind us, and as these are increasingly put into storage systems capable of computer retrieval, government may acquire a power-through-data position that armies of government investigators could not create in past eras.”

Westin’s foresight is incredible when his words are put into context, at a time where “electronic data storage” was largely stacks upon stacks of punch cards interpreted by computers 10 times the size and 1,000 times slower than today’s technology. To give a better reference point, the same year Privacy and Freedom was published, the world’s first hand-held calculator was invented, now on display at the Smithsonian. The initial and primitive stages of the Internet did not begin until two years after the book’s release.

Even at the time of publication, reviewers knew almost instantly the book would be a classic. Writing in The Saturday Review, James Kilpatrick said Privacy and Freedom “may well rank among the most important books of the decade.” The “Briefly Noted” section of The New Yorker’s September 23, 1967, issue read that, “Professor Westin’s thoughtful thoroughness makes good reading and provides the reassuring spectacle of a first-class mind working on a hard-core problem.”

George Washington University Law School Prof. Daniel J. Solove recognizes Privacy and Freedom as “the most sophisticated, interdisciplinary and insightful discussion of privacy,” insisting, “It belongs on the bookshelves of everyone in the information privacy field, and it deserves its place in the small collection of the most influential privacy works ever written.”

Yet Westin’s most notable work, laying the foundation for the rapidly growing field of privacy, has been out of print for some time, and the availability of the text is scarce with only a handful of used copies listed for sale on the Internet.

This is why, shortly following the foundation of its Westin Research Center in late 2013, the International Association of Privacy Professionals, an organization largely built on the principles set forth by Westin, immediately set upon republishing the text, so that it would again be available to professionals working in the field. This limited-edition hardcover of Westin’s influential piece is accompanied by forewords from leaders throughout the privacy industry recognizing the importance and influence of the text.

Specifically, we are excited to be able to include Westin’s last scholarly writing as a special foreword to this edition, reflecting on the evolution of the field and the text’s relevance in today’s world.

If you would like a copy, it can be acquired with a $100 (or greater) donation to the Westin Research Center, either in person at the Resource Center at the Summit, or via web link here.

Adam Quinlan is a University of Maine Law School student and IAPP extern.

August was shaping up to be the month U.S. privacy professionals might catch their breath while fluid discussions around the proposed American Data Privacy and Protection Act pause during U.S. Congress' summer recess. But now the U.S. Federal Trade Commission has everyone holding their breath once a...
END_OF_DOCUMENT_TOKEN_TO_BE_REPLACED queue Save This

The proposed American Data Privacy and Protection Act feels so close and yet so far away. The comprehensive privacy bill is on the cusp of a U.S. House floor vote, a first for any federal privacy proposal. But the bill's fragile nature is being tested at a crucial point in the legislative process as...
END_OF_DOCUMENT_TOKEN_TO_BE_REPLACED queue Save This