In August, several civil liberties groups filed a complaint that asked the U.S. Federal Communications Commission to investigate law-enforcement use of cell site simulators, or so-called Stingrays. The complaint was specifically leveled at the Baltimore Police Department for possibly violating the Communications Act and for using a technology that disproportionately affects minority communities.

On Thursday, 12 U.S. Senators followed up with an open letter to FCC Chairman Thomas Wheeler expressing concern about the use of Stingrays, together with a set of 10 detailed questions about the FCC’s role in overseeing the technology.

“We are particularly concerned about allegations that cell site simulators … disrupt cellular service and may interfere with calls for emergency assistance, and that the manner in which cell site simulators are used may disproportionately impact communities of color,” the senators wrote.

The letter received applause from Georgetown Law Prof. Alvaro Bedoya, a former staffer of one of the letter’s signatories, Sen. Al Franken, D-Minn. "This is the right call from Senator Franken,” Bedoya said in comments provided to The Privacy Advisor. “Surveillance doesn't affect everyone equally. It disproportionately affects people of color, low-income people, immigrants, and other vulnerable communities. We need to see that surveillance isn't just about privacy. It's about civil rights and equal protection, too."

Indeed, the use of such technology also raises larger societal concerns, according to Justice First Director of Field Operations Eugene Puryear. "While it is clearly a positive step that a group of lawmakers are raising questions about stingray technology and its potential discriminatory impact, the very fact that there are so many outstanding questions and such a lack of transparency is in and of itself troubling. It is undeniable that racial profiling of various forms is central to law enforcement at every level."

Stingray technology allows law enforcement to intercept mobile phone traffic by mimicking a cellphone tower. The method is similar to "man-in-the-middle" attacks, in that it captures the data between two legitimate cell phone towers.

"The impact, then, of technology with the ability to gather large amounts of information on the movements of large numbers of individuals heavily concentrated in particular communities raises a very clear risk of serious abuse," Puryear added. "In general we should move away from stingrays being used as a law enforcement tool, their implications in terms of the ability to construct detailed profiles of potentially thousands of people in a given area creates far too much risk of that same information being used against particular communities where, again, we know already racial profiling and biased law enforcement practices exist."

The senators' letter, in part, stems from the complaint filed by the American Civil Liberties Union and others, from last August, which alleges the use of Stingrays violates the Communications Act because the surveillance technology disrupts the ability of cell phones to make or receive calls – including 911 emergency calls. This “willful” interference with a cellular network violates Section 333 of the Communications Act, the complaint argues. The ACLU also stated that local law enforcement have not gained appropriate licenses to operate Stingrays on the wireless spectrum.

The second prong of the senators’ letter, however, concerns the disproportionate use of the technology in minority neighborhoods. The senators point out that Section 151 of the Communications Act requires that FCC ensure U.S. citizens have equal access to communications technology, regardless of race, national origin, religion, or gender.

The August complaint included an image demonstrating the disproportionate use of Stingrays in minority neighborhoods. It was also tweeted by Bedoya. 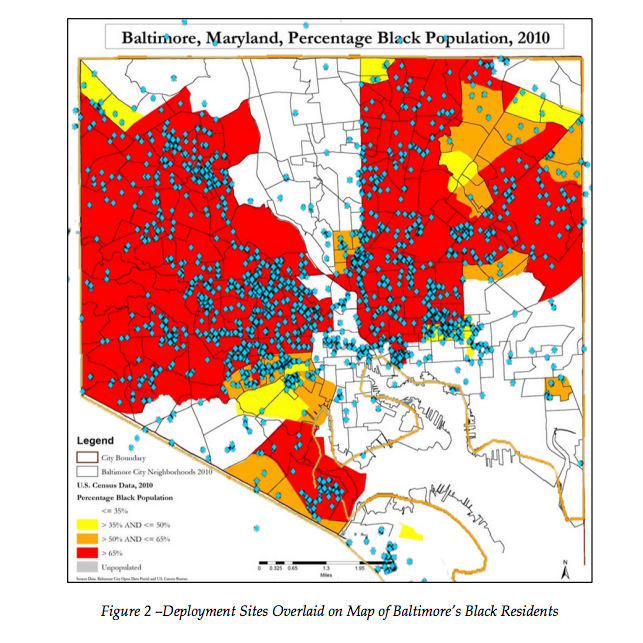 Also in August, Georgetown University's Institute for Public Representation Director Laura Moy said, "There's a pattern of law enforcement agencies around the country engaging in racially discriminatory policing, and that extends to surveillance technology." She also believed Stingray use violates the Communications Act. "I think it's a pretty clear violation, and I think the FCC has been looking the other way for a long time, hoping nobody will notice."

The senators point to a discrepancy in The Washington Post article linked above. "According to the Post article," they write, "an FCC official indicated that cell site simulators do not transmit signals on the wireless spectrum - a statement directly at odds with Department of Justice documentation on the devices."

As a result, the senators are asking whether Stingrays transmit over frequencies used by traditional cell phone carriers. They also want to know whether law enforcement must obtain licenses from the FCC to transmit over the spectrum, and if so, what kind of oversight is in place; whether testing has been done in the real world to determine whether emergency calls would be affected; and whether a list exists laying out which law enforcement agencies possess the technology. The senators also inquire about whether the FCC's 2014 task force for assessing the misuse of surveillance technology has met or produced any results.

The letter also touches upon another 2016 report in which the FBI allegedly asks state and local law enforcement agencies using Stingrays to sign a non-disclosure agreement.

Though it's not clear whether the FCC's Wheeler will provide answers to the senators, or whether such an answer will be made public, it's tough to imagine any answers will be forthcoming anytime soon: The FCC just released a highly anticipated broadband consumer privacy proposal that is due for a vote by its commissioners later this month.

Hello, U.S. Digest readers! Happy Friday from southern Maine, where we’re immersed in stunning fall foliage. October is my absolute favorite month of the year here in New England. The bright reds, oranges and yellows, the sounds of leaves rustling along the ground, mums and pumpkins dotting porches...
END_OF_DOCUMENT_TOKEN_TO_BE_REPLACED queue Save This

A federal privacy law in the U.S. is not on the immediate horizon, but the conversation for why it makes sense to draft legislation rages on. There’s reason to believe a federal standard for privacy could generate a remedy to the many privacy issues the U.S. currently faces, including those associat...
END_OF_DOCUMENT_TOKEN_TO_BE_REPLACED queue Save This

Many issues are top of mind for privacy professionals these days and the list continues to build. Those working out of the U.S. have their plates full with state privacy law compliance, data transfer conundrums and user privacy requests. There are few things that can help unlock solutions to these ...
END_OF_DOCUMENT_TOKEN_TO_BE_REPLACED queue Save This

A federal privacy law in the U.S. is not on the immediate horizon, but the conversation for why it makes sense to draft legislation rages on. There is reason to believe a federal standard for privacy could generate a remedy to the many privacy issues the U.S. currently faces, including those associa...
END_OF_DOCUMENT_TOKEN_TO_BE_REPLACED queue Save This

U.S. Congress, industry, civil society and the White House have all taken steps toward the creation of a federal privacy law. While what a federal privacy law will look like — and if and when it will happen — are still unknown, the IAPP has been closely monitoring the happenings and has now created ...
END_OF_DOCUMENT_TOKEN_TO_BE_REPLACED queue Save This