Privacy Professionals Salary Profiles
During the first weeks of 2015, the IAPP fielded its periodic salary survey to the 25,000+ privacy professionals in the IAPP’s database, working with third-party research firm Fondulas Strategic Research to track, over time, salary ranges, roles and median salaries for the world’s privacy professionals.

The survey took a median length of 23 minutes to complete, with participants responding to questions on salaries, bonuses, raises and the operational aspects of their privacy organizations (more to come on that last part). Respondents from all regions were asked to supply salary-related information in U.S. dollars for consistency of comparison across regions. Specific information on each region is detailed in the individual sections that follow the main portion of the results. For some questions, sample sizes for salary information are larger than those who provided personal information, such as gender, so some discrepancies may exist between overall medians and those of segments.

This year, we received 1,305 responses from across the globe, with the largest portion from the U.S., followed by Canada and Europe, and with additional responses from Latin America, Africa, the Middle East, Asia and Australia/New Zealand.

Overview of Key Findings
The median age of privacy professionals differed from region to region, but for those regions with responses from 100 or more privacy pros, the median age was 44. 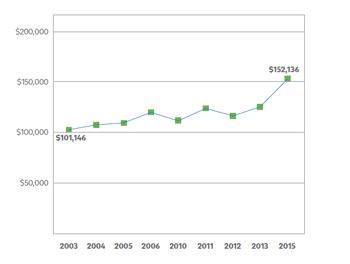 Salary by Organization
The majority of respondents, 22 percent, reported working for firms of between 5,000 and 24,999 employees. However, organizations of all sizes were well represented in the survey, with the smallest firms of fewer than 100 employees receiving 10 percent of the responses and all other firms represented by between 15 and 19 percent of respondents. Overall, the largest number of responses came from the Software and Services industry, with 19 percent of privacy pros reporting they work in that field. Not surprisingly, the organizations with the largest number of employees at 75,000 or more had the highest median salary at $123,000, while those with the fewest number of employees—under 100—had the lowest median salary at $94,278.

For median salary by industry, the highest earners were in the Media sector at $138,000, followed by Drugs and Biotechnology at $135,835. Government and Education and Academia reported the lowest median salaries at $87,065 and $83,533, respectively.

In sectors with more than 25 responses, “Conglomerates” showed the most significant increase in salaries for privacy professionals since 2013. In that sector, the mean base salary increased from $127,228 to $440,661. However, several sectors—Education and Academia, Healthcare, Insurance, Media, Retail, Software and Services, Tech Hardware and Equipment and Telecom—showed decreases in mean base salaries from 2013 to this year.

Experience and Position
Looking at salary by experience, the highest earners reported $653,911 for mean base salary in 2015 and fell into the category of those with between 16 and 20 years of experience. However, it is important to note this sample size was one of the smallest with seven respondents, compared to 541 respondents in the zero to five years of experience range. At that level the mean base salary was reported at $135,739 for 2015.

Not surprisingly, those privacy professionals who reported positions in the C-Suite or at the Executive Vice President (PV), Senior VP or VP level had the highest median salaries for 2015 at $167,500. Lead Counsel followed at $150,000 with Director next at $135,540,

Gender
For all respondents taken together, median salary reported by gender was higher for men than for women. Male privacy pros reported a median salary of $116,000 while their female counterparts reported $105,500. 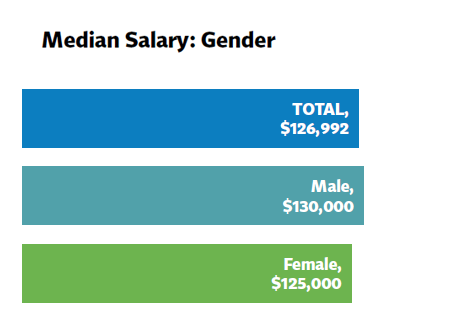 IAPP Privacy Professionals Salary Surveys
All IAPP Salary Surveys can be found on the "IAPP Reports and Surveys" topic page in the Resource Center.
Click to View

Web Conference: How Digital Ocean Takes A Deep Dive Into Their Financial Data With BigID

Original broadcast date: 10 November 2021 Digital Ocean recently went public - and with every IPO comes additional regulations and data management requirements. Learn how Digital Ocean manages their regulated data, and how they use BigID to know their data for risk, compliance, and value. ...
END_OF_DOCUMENT_TOKEN_TO_BE_REPLACED queue Save This

Universities around the world are adding privacy curricula in their law, business and computer science schools. The IAPP’s Westin Research Center has catalogued these programs with the aim of promoting, catalyzing and supporting academia’s growing efforts to build an on-ramp to the privacy professio...
END_OF_DOCUMENT_TOKEN_TO_BE_REPLACED queue Save This

Web Conference: AI, Algorithmic Risk and What to Do About It

Original broadcast date: 8 November 2021 From setting insurance premiums to deciding who gets a home loan, from predicting the risk of a person re-offending to more accurately diagnosing disease, algorithmic systems – especially those turbo-charged by AI - have the ability to re-shape our lives. As...
END_OF_DOCUMENT_TOKEN_TO_BE_REPLACED queue Save This

Web Conference: The Convergence of Structured & Unstructured Data: Why Truyo + Egnyte Teamed Up

Original broadcast date: 28 October 2021 Join this discussion to learn: Why a unified data lake spanning structured and unstructured systems is key to privacy compliance and governance, how upcoming legislation will rely on your organization having its entire data footprint mapped out to meet compl...
END_OF_DOCUMENT_TOKEN_TO_BE_REPLACED queue Save This

This year’s “Privacy Governance Report,” produced in collaboration with EY and EY Law, analyzes the state of the privacy profession in 2021. It examines the ongoing effects of the COVID-19 pandemic on the privacy profession, including the evolution of remote/hybrid/office work, as well as expectatio...
END_OF_DOCUMENT_TOKEN_TO_BE_REPLACED queue Save This