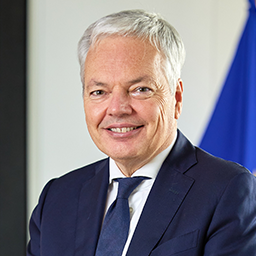 Didier Reynders is European Commissioner for justice responsible for rule of law, data protection and other fundamental rights, as well as consumer protection, a position he has held since December 2019. Previously, he held several high-level political positions in Belgium including minister of defense, minister of foreign affairs, foreign trade and European affairs, minister of finance and deputy prime minister. From 2004 to 2011, he served as chairman of the Mouvement Réformateur (liberal party alliance). He was elected member of the Belgian Parliament in 1992. Prior to this, he was president of the National Railway Company of Belgium and the National Society of Airways. Reynders has been a guest lecturer at the universities of Liège, Brussels and Louvain until he became European Commissioner. He holds a degree in law from the University of Liège.