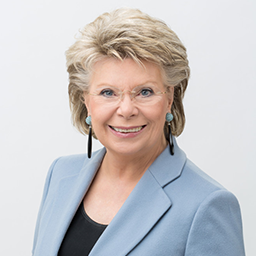 Viviane Reding served as European Commissioner for 15 years, responsible for Justice, Industry, Telecommunications, Research in Technology, Education, Culture and Sports. She has been Member of National and European Parliaments since 1979.

Specialized in European affairs, geopolitics, digital developments and foreign trade, she holds a Ph.D. in Communication (Sorbonne University, Paris, France). She was a professional journalist in the field of political affairs for 20 years at the beginning of her career.

In 1999, having served for 10 years in the Luxembourg Parliament and for 10 years in the European Parliament, she became European Commissioner for Education, Culture, Youth and Sport. In her first term she pushed through the Erasmus World programme, expanding the co-operation between universities and the exchange of students worldwide. She also strengthened the MEDIA programme in the interest of the European films industry.

In 2004, she became EU Commissioner for Information Society and Media, winning a major battle against telecom companies by capping mobile roaming charges by 70%. She was instrumental in the reform of the European telecom sector, opening the internal market to competition. In that period, she also reformed the European research area, reinforcing the technological research platforms.

In 2010, she became first Vice-President and EU Commissioner responsible for Justice, Fundamental Rights and Citizenship. She put in place a true EU Justice policy, launching a series of ground-breaking proposals in the field of civil, commercial, consumer, and criminal law, creating thus the basis for a European area of justice. She initiated the chapter “Justice for growth”, enabling both businesses and consumers to benefit fully from their rights in the European single market. This chapter includes consumer rights, cross border recovery of debts, cross border recognition of documents, women on boards, sales law, and the reform of the EU data protection rules. (GDPR).