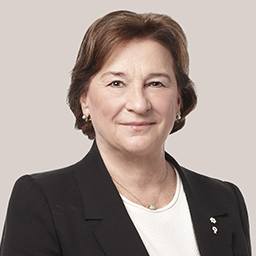 Jennifer Stoddart is a strategic advisor in the Privacy and Cybersecurity Group at Fasken in Montreal.

Previously, she was the Chair of the Commission d'accès à l'information du Québec from 2000 to 2003.

She has also held positions at the Human Rights Commissions of Canada and Québec.

Jennifer was named an Officer of the Order of Canada “for her international leadership in privacy rights and for her exemplary public service as the Privacy Commissioner of Canada”. The Québec Bar has recognized her with the distinction of Advocatus Emeritus. She has received honorary doctorates from the University of Ottawa and McGill University. 2020. In addition, she was nominated in 2020 as Chevalière de l’Ordre national du Québec. Jennifer is very involved in the community. She is currently honorary Colonel of the 34th Combat Engineer Regiment.