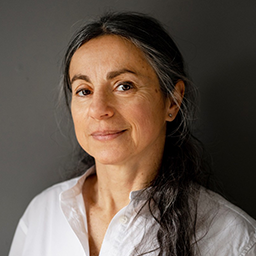 I am an Italian-born (Padua) and UK-based (Manchester) artist. I studied painting and drawing in my formative years and completed my undergraduate degree in Architecture at University IUAV in Venice.

I nurtured my passion for painting and drawing alongside my work as an architect. As well as house renovations, interiors and store designs, I worked on museum and temporary exhibitions and theatrical scenographies in Rome, Padua and Milan between 1991 and 2010. I experimented with the re-use of recycled newspaper glued on canvas, cardboard or wood, as a base for my paintings, as well as exploring many other techniques, materials and subjects. However, in terms of themes, there have mainly been three recurring ones: people’s faces, the movement of the human body and the relationship between public and private in everyone's life.

Between 2004 and 2008 I took part in various group and solo exhibitions in Padua, Milan and Turin and in 2005 I founded, together with other artists, the group “Gruppo Fuoridisegno”.

In 2008, in search of new artistic solutions and leaving painting as unique form of expression behind, I began the production of artworks using printed paper recycled from magazines, newspapers and catalogs . This new artistic research was inspired by my move to Brussels in 2010, where I found new inspiration in the chaotic succession of images, messages, colours and culture characteristic of this city.

I have been based in Manchester UK since early 2012, and I am continuing to explore further the dimension and the power of printed paper, along with questions of identity and their relation to the constant and rapid changes within it.