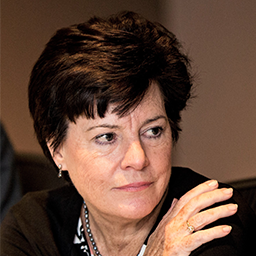 Since 1991, Angela Mills Wade has been the Executive Director of the European Publishers Council (EPC), a high level lobby group of Chairmen and CEOs of leading European media groups. EPC companies are delivering a diverse range of independently financed, professionally produced journalistically driven news, analysis and entertainment across all platforms and devices bringing print or digital newspapers, magazines, journals, eLearning solutions, books and broadcasting to citizens across the EU and globally. Angela has led many successful lobbying and press campaigns in support of publishing and media businesses and has specialist knowledge of media, copyright, data protection, and advertising and has been closely involved with the development and promotion of effective advertising self-regulation, including the innovative transparency and choice programme run by the EDAA.

Angela holds a number of industry positions including the Chairmanship of the EDAA (European Digital Advertising Alliance), the UK’s Publishers’ Content Forum, Joint-chair (with the British Library) of the Joint Committee on Legal Deposit. She is a member of the Boards of EASA (European Advertising Standards Alliance), the UK Copyright Hub, and Reporters without Borders UK.  In 1999 when Angela realised there wasn’t a consultancy in Brussels that really fitted her own needs as a client, she co-founded a European Public Affairs Consultancy called Europe Analytica, based in Brussels, specialising in the media, cultural and creative industries. Her company has built an extensive and influential network of leaders in politics, journalism, the media and creative industries - ready to meet the challenges and opportunities that businesses and trade bodies face when it comes to dealing with legislation emanating from the EU.