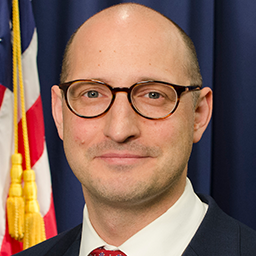 Following his nomination by President Donald J. Trump and unanimous confirmation by the United States Senate, Noah Joshua Phillips was sworn in as a Commissioner on the Federal Trade Commission on May 2, 2018. Before coming to the FTC, Phillips served as Chief Counsel to U.S. Senator John Cornyn, of Texas, on the Senate Judiciary Committee. From 2011 to 2018, he advised Senator Cornyn on legal and policy matters including antitrust, constitutional law, consumer privacy, fraud, and intellectual property. Prior to his Senate service, Phillips worked as a litigator at Cravath, Swaine & Moore LLP, in New York City, and Steptoe & Johnson LLP, in Washington, D.C. Phillips began his career at Wasserstein Perella & Co., an investment bank in New York City. Phillips received his A.B. from Dartmouth College and his J.D. from Stanford Law School.