The 2015 IAPP Salary Survey results show that in privacy and data governance, women occupy similarly senior positions and earn roughly as much as men. Based on more than 1,300 responses, the survey also indicates there are more female chief privacy officers (CPOs) than male working in the privacy profession today. This animated infographic illustrates the highlights.

At an event yesterday in Washington, DC, IAPP CEO Trevor Hughes, CIPP, said behind those numbers are the "amazing stories of women demonstrating phenomenal leadership in privacy today." To explore some of those stories, the IAPP and the Center for Democracy & Technology hosted a panel of leaders to discuss strategies, experiences and the best–and worst–advice they'd ever gotten.

Why Is Gender More Balanced in Privacy Than Other Industries?

Hilary Wandall, CIPP/E, CIPP/US, CIPM, CPO at Merck, said because privacy is a newer profession, women have been able to contribute to its growth and development. In other professions, for example, there were defined ways of rising to success by the time women came to the workforce.

"There were low barriers to entry," agreed Patrice Ettinger, CIPP/US, Pfizer's CPO. Women have been able to find their way to success not through well-defined positions but by creating them as they went along. Ettinger joined Avon to help it create its first privacy program. It was an opportunity for her to build something from the ground up. She said when she first touched privacy, she was "hooked."

Maybe that's because women are pulled to the field because it's one that, at its core, "focuses on how to help make a better world by improving society, improving people's lives," Wandall said. 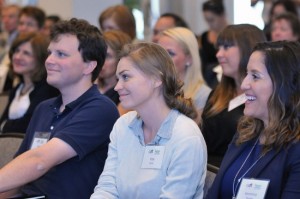 Christine Frye, CIPP/US, CIPM, CPO for Bank of America, agreed. Privacy focuses on the "right thing to do," something that instinctively appeals to women, who are often passionate about such ethical challenges as "ensuring individuals' rights, helping companies communicate with customers" and helping build "an infrastructure for a company that allows us to do business in a compliant and respectable way."

Erika Brown Lee, CIPP/US, the chief civil liberties and privacy officer at the Department of Justice (D0J), said privacy is a unique field because it really didn't exist 50 years ago. Of the three CPOs in the DoJ's history, Lee said, all have been women.

Maybe that's because the field "encouraged the entry of women without having to displace a field of men that was preexisting," she said. While at the DoJ there's a strong contingency of women in privacy, the industries with which she intersects on a daily basis are noticeably different, she said.

"I can still walk into a lot of rooms where I'm the only woman," she said, particularly on the intelligence or law enforcement side. That sometimes means "you have to be prepared to be that advocate for our positions," she said.

Frye, whose career in privacy started in mergers and acquisitions and the direct marketing association, said she found her path to success by staying open to opportunities.

"I was always willing to say I can do that. I can help do that," she said.

That resonated with Wandall, who started as a data scientist working on HIV research and, via a curvy path, found herself becoming a CPO. She said the opportunity to become a leader in the field came to her when, as a law student, her company asked her to look into how their children's product could comply with the then-newly enacted Children's Online Privacy Protection Act (COPPA). She had no experience with COPPA, but she made up her mind to get to work on it.

"It's the belief that I can do anything," she said. "I'm open to the white space; let's figure it out."

All four women agreed getting a privacy certification has been critical to their success. Wandall said certification is a demonstration of a "core set of competency."

"I have encouraged everyone on my team to have a credential," she said, adding that everyone now does, "including my administrative assistant, and she's now essential to the team because of that."

Ettinger said the worst advice she ever received was from someone who told her the only way to be successful as a lawyer was to go straight to a law firm from law school. The advice she wishes she'd gotten?

"Stretch; look for challenges," she said. "A lot of studies have shown women are afraid to ask for assignments or jobs because they don't think they have all the qualifications. The advice I would give women is to stretch."

In a Q&A with The Observer, founder of secure messaging app Wickr Nico Sell discusses why she always wears sunglasses in public and why women make great hackers, among other topics. Sell says she wears the shades in places where she might be publicly photographed as a step to decrease her digita...
END_OF_DOCUMENT_TOKEN_TO_BE_REPLACED queue Save This

Privacy: An Equal Playing Field for Women and Men

3
In the midst of the public debate around the lingering gender gap in places like Fortune 1000 C-suite positions and the technology industry, our 2015 IAPP Salary Survey results show that, in privacy and data governance, women occupy similarly senior positions and earn roughly as much as men. The re...
END_OF_DOCUMENT_TOKEN_TO_BE_REPLACED queue Save This

Gender Equality Is Great; Let’s Keep It That Way

In response to the IAPP’s latest salary survey, which revealed virtually no gap between the salaries of male and female privacy professionals, Sandra Hughes, CIPP/US, offers her reaction and personal story in this exclusive for Privacy Perspectives. “As one of the early pioneers of the privacy profe...
END_OF_DOCUMENT_TOKEN_TO_BE_REPLACED queue Save This