A couple weeks back, a new social networking app, with all the ease and power of live video streaming, made quite a splash at SXSW. Meerkat went from zero to hero faster than a Tesla drag race. Actress and comedian Julia-Louis Dreyfus even “meerkatted” the crowd during her keynote conversation. 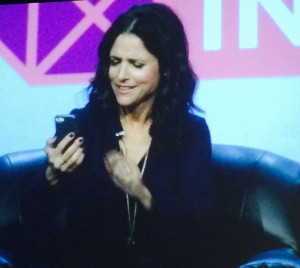 But Meerkat may have been a flash in the pan. Just days after making its big splash, Twitter announced it would no longer share its Social Graph with the startup, and that it, too, had its own version of Meerkat. Ladies and gentlemen, we now have Periscope.

Whichever app you use: Live-streaming—though not new—just got significantly easier.

And with that ease, just about anyone can be their own, on-the-ground, live-and-in-person reporter and, in real time, receive commentary from viewers and voyeurs. They can ask the broadcaster questions and the user can answer by speaking. Fittingly, perhaps, many users of Periscope first used it to record the fire in the East Village in NYC the very day the service made its public debut.

After a quick download of Periscope, which is currently only available in the Apple App Store, you can peruse random live streams and experience traffic in Moscow, or a sunset in Los Angeles, someone's vacation, a selfie within a selfie at a radio station, or a person talking to their dog. And also, with that ease, we can all become unwilling subjects in someone else’s “broadcast”—whether we want to or not.

Now, I’m not saying that Periscope is a bad, privacy-invading social network; but Periscope, and its less fortunate cousin, Meerkat, can easily become a bad, privacy-invading social network. I mean, just look at Periscope's logo: It’s an eyeball within a location sign. These are services that can easily be manipulated for creepy purposes, or allow users to unwittingly compromise their privacy, or of the privacy of those around them. Believe it: These live-video services will be nearly ubiquitously built into all kinds of apps and services soon, and could affect privacy pros in unexpected ways. 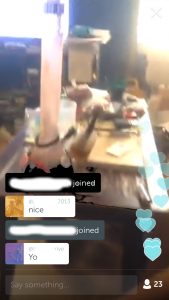 A not-so-private moment of recreational use...

Periscope, much like its parent company, Twitter, posts broadcast data to the public by default. “This includes the metadata provided with your broadcast, such as when and where you broadcast,” Periscope’s privacy policy states. And though the aim of the service is to provide live streaming, users can upload the video to their Twitter streams for others to watch within 24 hours of the recording, or until the user deletes the archived broadcast.

I have to admit, I’ve enjoyed tapping into Periscope. I’ve seen those sunsets and traffic jams, but, from a privacy perspective, I’ve also seen college kids passing around a bong, high schoolers ignorantly boasting racist commentary and even a call center employee live stream his conversation with a customer.

As has been said, a picture is worth a 1,000 words, but live streamed video is far more revealing. For a while, past tweets on Twitter were very difficult to access, but now that it has a connection with Ditto, mining data from past posts has become infinitely easier. Likewise, how easy will it be to mine past Periscope video down the road? Yes, Periscope says the videos are deleted after 24 hours, but remember, Snapchat said user posts were ephemeral, too. One FTC consent order later, I think it’s easier to feel queasy at best with the future retention of these video streams.

Is it fair to put the burden on kids posting pictures of themselves huffing bong rips to decide whether their videos are truly ephemeral?

Safety is another huge factor here. 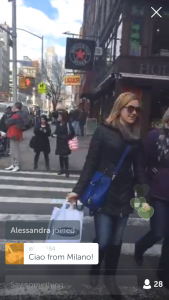 Our diminishing anonymity in public.

Periscope posts a user’s location by default. Really, it’s an essential factor in the service. Location certainly plays a role in which videos I choose to click on—think sunsets or views from atop the Eiffel Tower. But unsuspecting women or children, for example, could easily become victims of stalkers.

Plus, for employers and organizations, the ability for employees to broadcast while working is disturbingly easy. I listened to one call center operator handle a 20-minute conversation with a customer—name included—while simultaneously chatting with viewers. Another user even unknowlingly broadcast his computer screen, complete with a list of email contacts. All it takes is a screen capture to steal away potentially confidential information.

I hope CPOs are accounting for this new form of data breach in their risk registers.

A recent TechCrunch report on how live streaming is going mainstream may shed some additional light on the potential privacy issues with ubiquitous live streaming:

format_quote“More importantly, our cultural mindset has changed to the point where we’re ready to embrace this sort of public performance. Meanwhile, as viewers, the smartphone’s ubiquity means we all have an easy way to tap into these ongoing streams from anywhere.”

But is that really true? Is society ready to embrace this public performance? With everyone a potential broadcaster, anonymity in public gets rarified. On the other hand, Periscope's immediate popularity demonstrates that perhaps smartphone owners are ready for this sea change. If so, are privacy professionals and regulators ready for this?

On the anti-surveillance side of the equation, services like Meerkat and Periscope help users watch the watchers. In fact, Periscope creator Kayvon Beykpour reportedly got inspiration for the service by accidentally witnessing the Taksim Square protests in Turkey. After that, he wanted to create a service that could easily document such historic and political events. We’ve seen the power this sousveillance can have in spreading the word about and combating human rights violations—check out this amazing keynote from Oren Yakobovich for more on this.

It’s not surprising that live streaming services are viral right now. Perusing Periscope can be really fun (and—fair warning—a massive time suck), and the ability for humans to connect across the world is simply stunning.

It’s hard, though, not to be cynical, and to see these types of services crawl with pornography, trolls and other bottom-of-the-barrel scum found just about everywhere on the Internet.

What’s different about live streaming, though, is, with each video broadcast, users are putting more and more, not just of themselves, but personal data of others, and, in some cases, personal data held by organizations out into the world. Maybe TechCrunch’s Sarah Perez is right, maybe our cultural mindset has changed enough to embrace this public performance—but are privacy pros or regulatory authorities prepared for everything else that comes with it?

The Wall Street Journal reports the National Intelligence Council's "Global Trends 2040" suggests privacy will be nonexistent as technologies, specifically those driven by artificial intelligence, evolve in the years to come. The report states privacy "may effectively disappear by choice or governme...
END_OF_DOCUMENT_TOKEN_TO_BE_REPLACED queue Save This

U.S. government surveillance lab Mitre Corp. created and patented technology that can guess a person’s name by analyzing their facial characteristics, Forbes reports. Mitre’s patent said it wanted to use research from the Hebrew University of Jerusalem, which found a computer trained on a dataset of...
END_OF_DOCUMENT_TOKEN_TO_BE_REPLACED queue Save This

DNA has been a staple of cop shows for decades, but now, a new Netflix show has taken DNA into a different realm — the arena of genealogy testing. “The One” focuses on a pair of business partners who use DNA to help people find their true love. IAPP Associate Editor Ryan Chiavetta, CIPP/US, looks at...
END_OF_DOCUMENT_TOKEN_TO_BE_REPLACED queue Save This

The latest on COVID-19 vaccine passports from Africa, Europe

The Africa Centres for Disease Control and Prevention deemed COVID-19 vaccine passports "inappropriate" at this stage of the vaccine rollout, The Washington Post reports. Africa CDC's John Nkengasong said passports would "create huge inequities and will further exacerbate them" due to the slow upt...
END_OF_DOCUMENT_TOKEN_TO_BE_REPLACED queue Save This

For anyone who thought privacy might take a back seat during the pandemic, I don't think that's what any of us in the industry are experiencing. It's actually quite the opposite. With virtually everything being online these days and more options than ever, the organizations that are showing they ca...
END_OF_DOCUMENT_TOKEN_TO_BE_REPLACED queue Save This