The rise of peer-to-peer networking and the burgeoning “sharing economy” was the topic du jour Tuesday at a Federal Trade Commission (FTC) workshop in Washington, DC, where participants explored whether any new regulation is needed. In a wide-ranging conversation covering rapidly changing business models, potential regulatory obligations and consumers’ increasing dependence on reputational feedback mechanisms, economists, industry representatives and academics hashed out what is clearly a complex but innovative sector of the modern economy.

“For a long time, trust was provided through community,” said New York University Stern School of Business Prof. Arun Sundararajan. “In the last 100 years, it turned to branding. And now, we’re coming full circle with the digitized community.”

Federal Trade Commissioner Maureen Ohlhausen set the tone for the day in her opening speech, noting that just because the agency is looking at the sharing economy “does not automatically portend a flurry of future enforcement actions,” adding that robust trust mechanisms may be one way of replacing regulation.

Ohlhausen also stressed five essential questions for the workshop in her opening address. Among them, she asked, “How do we also ensure that (sharing economy) business models don’t inadvertently erode beneficial, existing consumer protections in such diverse areas as privacy, data security, health and safety?” 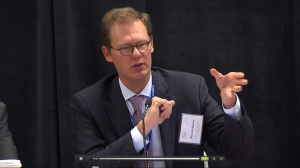 Though much of the day's conversation focused on competition, network effects and information asymmetry, as well as other economic issues, data security and privacy are clearly important aspects to the sharing economy paradigm, particularly since much of the trust in ride-sharing, hospitality and retail services relies on reputation feedback mechanisms.

Such mechanisms, conducted over a given service platform, include user reputation, peer reviews and identity verification and are often involved in services in which consumer safety is at a life-or-death level. In ride-sharing services, for example, a driver’s history is a significant issue for riders.

“In the sharing economy,” said Boston University Questrom School of Business Prof. Chrysanthos Dellarocas, “the driver and the rider have to worry about each other. Information asymmetry issues become symmetrical, but the downside of things going wrong is much more severe. A bad Uber driver could kill you.”

Airbnb designer and National Bureau of Economic Research Postdoctoral Fellow Andrey Fradkin explained how reputational mechanisms drive the sharing economy. He noted that before Airbnb, Craigslist offered hospitality arrangements. “People could list something,” he said, “but Craigslist did not keep track of transactions or have a review system,” leaving users unsure of a service. Airbnb turned the tide by offering a detailed history of an accommodation, processing financial transactions as an independent third party and providing comment mechanisms that are only allowed after the financial transaction has been completed to stymie revenge or socially awkward situations between host and guest.

Truly, users have come to depend on feedback mechanisms to make important decisions. But are those mechanisms biased?

Former eBay employee and current University of Chicago Prof. Chris Nosko noted that most sellers on the platform look really good: “Are we in a world where reputations are this good, or is the system biased?” He said more research is needed in creating less biased feedback mechanisms for a more trustworthy experience.

Dellarocas pointed out that ratings can often be fake or unfair. Are users self-inflating their positive reputation by rating themselves, or are competitors issuing negative ratings? He said navigating this is tricky, but there are solutions, including a third-party system that “rates the raters” as well as algorithms to detect dubious ratings.

Plus, sharing economy platforms, by depending heavily on reputation, can, as a side effect, marginalize newer or less affluent users. Sundararajan expressed concern about a user’s inability early on to establish a reputation, potentially leading to marginalization and exclusion from services.

Clearly, though, the sharing economy is booming.

Airbnb Head of Public Policy David Hantman said Airbnb has facilitated 35 million guests having safe and positive experiences, with more than 25 million in the last year alone. According to a Future of Privacy Forum whitepaper, the total value of the global sharing economy in 2013 was $26 billion and could reach $110 billion in the coming years.

But as regulators grapple with how to parse traditional services—like hospitality or transportation—with modern peer-to-peer arrangements, the onus to protect users’ data is very much on those platforms. Appropriately sharing protected and anonymized data, for example, can be paramount to the success of platforms. Hantman noted that Airbnb can provide insurance to hosts because it has shared de-identified data of users with insurance companies. 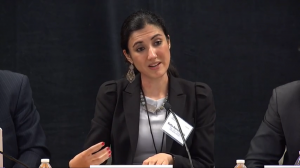 Cities can also benefit from shared-economy services by getting data to ensure better traffic flows or safer housing. “A partnership between platforms and cities could really flourish,” said National League of Cities Director Brooks Rainwater. Uber Head of Policy Development Ashwini Chhabra said smart cities should get platform data, but “in a privacy-safe way.” He said, for example, Uber is sharing de-identified data with regulators in Boston, MA, to help with city planning.

University of Tennessee School of Law Prof. Maurice Stucke expressed concerns about platform monopolies. “What if a platform uses its market domination to extract more data than a consumer is comfortable with?” he asked. Plus, he said, platforms could use price discrimination or behavioral targeting to marginalize or take advantage of users.

He also warned that data-driven mergers could “defy conventional anti-trust analysis.” As an example, he asked, “What if Google acquired Uber?” The amount of consumer data shared between each service could put the market at a significant disadvantage, he opined.

Yet, George Mason University’s Adam Thierer extolled the virtues of a hands-off approach. “At a minimum,” he said, “we need to be humble. The sharing economy is very much in its cradle.” He said existing common law can solve many of the concerns with the sharing economy already.

Tilburg University Prof. Sofia Ranchordás backed a fiduciary approach in her analysis. “If you have a relationship based on trust and economic dependence,” she explained, “you have a duty to keep data secret, but in some cases, you have a duty to disclose. Why don’t we put a fiduciary duty on platforms? With privacy, data shouldn’t be collected without consent.”

Thierer countered that the FTC’s best practices for data handling could already serve as a good model for platforms. “It’s very important we remember that the sharing economy is based on the free flow of information,” he said. “If you want more trust in this area, it’s going to necessitate the sharing of a lot of data.”

He continued, “Think about how far we’ve come by combining the power of reputational feedback mechanisms and information technology? It’s worth celebrating that fact—that the general policies of our country can allow companies to go out and innovate and not ask for a blessing first.”

The FTC will accept public comments on the sharing economy until August 4.

The Future of Privacy Forum (FPF) has released a whitepaper that focuses on the reputational, trust and privacy challenges users and providers face on management and accuracy of shared information. User Reputation: Building Trust and Addressing Privacy Issues in the Sharing Economy considers how rep...
END_OF_DOCUMENT_TOKEN_TO_BE_REPLACED queue Save This

Is There Value in the Right To Be Anonymous Commenters?

There’s been a lot of talk about the so-called right to be forgotten lately, but the Virginia Supreme Court this week agreed to look at another type of online user right: the right to anonymous commenting. Hadeed Carpet Cleaning is suing Yelp to unmask seven commenters who allegedly left highly c...
END_OF_DOCUMENT_TOKEN_TO_BE_REPLACED queue Save This

A federal judge has authorized a subpoena to Craigslist and Amazon compelling the companies to disclose the personal details of anonymous commenters who allegedly posted negative reviews of nutritional supplement manufacturer Ubervita and its products, Hot Hardware reports. Judge Marsha Pechman said...
END_OF_DOCUMENT_TOKEN_TO_BE_REPLACED queue Save This

1
I’ve been trying to think of my favorite Robin Williams moment since I heard the awful news of his death earlier this week—here’s one of many—but I am also saddened to hear that his daughter, Zelda Williams, has had to drop off social media altogether because of at least two abusive trolls.         ...
END_OF_DOCUMENT_TOKEN_TO_BE_REPLACED queue Save This

Ohlhausen To RSA: Be Reasonable; That’s All

The Federal Trade Commission (FTC) is a privacy regulator, sure. But it’s not out to get the good guys trying to do the right thing. It’s primary concern is making sure organizations are keeping the privacy promises they make to consumers. That was how Federal Trade Commissioner Maureen Ohlhausen ki...
END_OF_DOCUMENT_TOKEN_TO_BE_REPLACED queue Save This