Taken to some of its most extreme manifestations, geolocation tracking has enabled jealous and hateful spouses to track and stalk their partners, often resulting in domestic violence. This abuse, particularly of women, through such “stalking apps” was the focus Wednesday during a Senate Judiciary Subcommittee hearing on a location privacy bill introduced by Sen. Al Franken (D-MN).

More broadly, however, the Location Privacy Protection Act of 2014 proposes not only to “shut down these (stalking) apps once and for all,” it would also require companies that collect and use geolocation data to receive user permission first. Franken’s bill—co-sponsored by Sens. Chris Coons (D-DE) and Elizabeth Warren (D-MA)— would also require companies that collect the location of more than 1,000 devices to post online what is collected, shared and used; ban stalking apps altogether, and mandate that government gather more information about GPS stalking.

The ad industry, however, says such mandates would harm small businesses and the advertising ecosystem in general. Location-based ads, for example, allow small businesses to more accurately target their audience without having to employ large marketing campaigns.

Digital Advertising Alliance (DAA) Executive Director Lou Mastria, CIPP/US, testified, “The DAA is concerned that laws and regulations are inflexible and can quickly become outdated in the face of extraordinarily rapidly-evolving technologies. When this occurs, legislation thwarts innovation and hinders economic growth.” 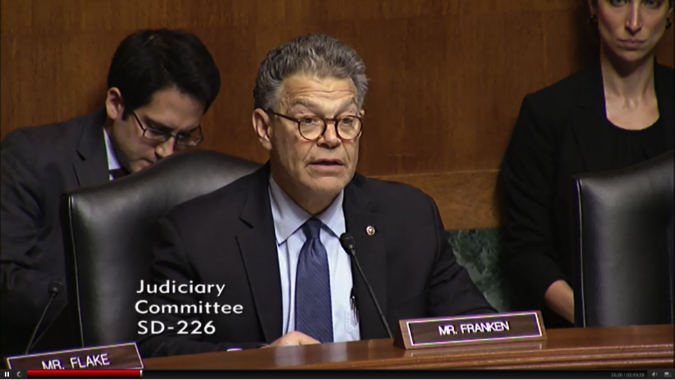 Mastria also said the DAA has a track record of accountability through its Self-Regulatory Principles and is backed by the enforcement of the Council of Better Business Bureau.

However, Franken, among others, openly questioned whether industry self-regulation was doing enough to protect users’ sensitive geolocation data. National Consumer League Executive Director Sally Greenberg specifically challenged Mastria on the DAA self-regulatory code, however. “With all due respect to Lou Mastria,” she said, “we’ve looked at the code and it’s filled with holes.” She said self-regulation is not working and that it’s not protecting consumers. She noted the Federal Trade Commission and the Government Accountability Office “say as much.” For example, a GAO study of in-car location-based services “found that despite recommended practices, location data disclosures were often broadly worded and inconsistently described the purposes for sharing de-identified location data.”

She added that “the voluntary nature of multi-stakeholder agreements and industry best practices limits their value in protecting consumers in the rapidly growing mobile data ecosystem.”

Mastria countered that the DAA has brought more than 30 cases against companies for not complying with their self-regulatory principles, and just recently referred one company to the Consumer Financial Protection Bureau for failing to disclose to consumers how its website collects and shares consumer data.

Whether Franken’s bill ultimately has traction to move forward, remains to be seen, but according to AdAge, “because the bill aims to stop technologies that have assisted violent criminals, this particular legislation could have a better chance of passing than some of the more sprawling privacy bills” that have been introduced in recent years.

And Franken emphasized that his concern really is with the bad actors: “I want to make one thing clear,” he said, “Location-based services are terrific. I use them all the time … They save time and money, and they save lives. Ninety-nine percent of companies that get your location information are good, legitimate companies.”

Nearly five years after the implementation of the EU General Data Protection Regulation, Europe is immersed in a digital market strategy that is giving rise to a host of new, interconnected regulation. Among this complexity resides the proposed Artificial Intelligence Act. Originally presented by th...
END_OF_DOCUMENT_TOKEN_TO_BE_REPLACED queue Save This

While a final resolution is near, there's been more wait-and-see periods than action during negotiations for the EU-U.S. Data Privacy Framework. First it was months of waiting in between the provisional EU-U.S. agreement on data transfers and the executive order securing U.S. national security comm...
END_OF_DOCUMENT_TOKEN_TO_BE_REPLACED queue Save This

Data retention has long been a blind spot of Europe's otherwise strict data protection regime. But a possible practical solution might be in sight. The European Union has a long history of asking the same question several times until the answer is the desired one. For example, in the 2000s, Ireland...
END_OF_DOCUMENT_TOKEN_TO_BE_REPLACED queue Save This

A recent statement from Italy’s data protection authority, the Garante, opens a new chapter in the never-ending story of profiling cookies. In order to understand the weight of the Garante's words, we must look back to June 10, 2021, when the DPA issued a new set of cookie guidelines and changed th...
END_OF_DOCUMENT_TOKEN_TO_BE_REPLACED queue Save This

Scuba diving might not be the first thing that comes to mind when privacy professionals think of an incident response plan. But there are parallels and Melanie Ensign, an avid diver certified in rescue and prevention, draws on them in her work in both areas. “I bring a lot of the concepts that I le...
END_OF_DOCUMENT_TOKEN_TO_BE_REPLACED queue Save This