As the EU General Data Protection Regulation approaches its first birthday, hundreds of thousands of privacy professionals have jobs tied to the milestone. New IAPP research indicates that an estimated 500,000 organizations have registered data protection officers across Europe under the GDPR.

The GDPR, which has been in force since May 2018, requires public authorities and companies monitoring individuals or processing special categories of their data on a large scale to register a DPO who has “expert knowledge of data protection law and practices.” In 2017, an IAPP study estimated the GDPR would create a need for at least 75,000 DPOs worldwide. As the GDPR’s first year draws to a close, we examined how many organizations put DPOs to work in practice. It turns out, our initial estimate, which seemed huge at the time, fell far short of the reality.

The new estimate, which indicates a half-million organizations already registered DPOs, combined with new data from IAPP’s latest salary survey, sheds light on the rapid growth of the privacy profession and the expanding role of DPOs in Europe and beyond.

The new estimate, which indicates a half-million organizations already registered DPOs, combined with new data from IAPP’s latest salary survey, sheds light on the rapid growth of the privacy profession and the expanding role of DPOs in Europe and beyond. As European Data Protection Board Chair Andrea Jelinek said at the 2019 IAPP Global Privacy Summit, “the importance of the DPO cannot be overestimated.”

IAPP’s current assessment is based on DPO registration data received from data protection authorities in Austria, Bulgaria, Denmark, Finland, France, Germany, Ireland, Italy, the Netherlands, Spain, Sweden and the United Kingdom, which together account for about 80% of European Economic Area gross domestic product. In these 12 EU member states alone, at least 376,306 DPO registrations were sent to DPAs. Using this data, along with GDP figures and publicly available statistics from Eurostat on the number of enterprises active in the economy, we calculated the number of DPO registrations per country as a percentage of GDP and total company presence. We found that the number of enterprises in the economy was a more accurate predictor than GDP of the number of organizations registering DPOs. From this data, we estimated the number of DPOs in the remaining EEA countries, assuming that in aggregate they would have an approximately equal percentage of DPOs in relation to total company presence. Recognizing the different standard for DPO registrations in Germany, which required the appointment of DPOs pre-GDPR and therefore results in a higher number of registrations, German numbers were calculated separately based on data received from the federal and state-level data protection authorities. The German total of close to 200,000 organizations with a registered DPO was added to the extrapolated EEA total (minus Germany).

The estimated 500,000 organizations that have registered DPOs across the EEA include both private-and public-sector organizations. While we lack sufficient data to approximate the percentages of public versus private entities at the EU level, the data we have suggests that public authorities represent a sizeable portion of the total. For instance, in Ireland, public authorities have submitted 18% of DPO registrations, whereas in Italy, the public sector accounts for 35 % of registrations.

Since organizations are permitted to use external DPOs, who, in turn, may serve multiple organizations, the number of DPOs is lower than the total count of organizations. In France, the pooling effect is significant. While almost 52,000 organizations have registered, the actual DPO population is just shy of 18,000. At the same time, in many organizations, the DPO does not work alone, but rather as one member of a team of privacy professionals.

This raises the question: Has a gap emerged between the roles and responsibilities of U.S. and EU privacy officers? If so, might the GDPR’s requirement that the “data protection officer shall directly report to the highest management level” eventually help more EU privacy professionals rise to the C-suite over time?

This raises the question: Has a gap emerged between the roles and responsibilities of U.S. and EU privacy officers? If so, might the GDPR’s requirement that the “data protection officer shall directly report to the highest management level” eventually help more EU privacy professionals rise to the C-suite over time? Perhaps more interestingly, looking forward, will replication of data protection officer requirements in U.S. or foreign legislation lead to the continued growth of the privacy profession globally? In this next few years, we will likely find out.

Companies and regulators alike worked hard to prepare for and then implement GDPR requirements. Both saw increases in staff and resources, but those paled in comparison to the influx of complaints, data breach notifications, fines and data protection officer registrations. What can we learn from this intense activity? Check out this new IAPP infographic to learn about GDPR’s first year in numbers. 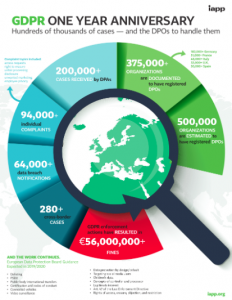 The California Consumer Privacy Act is top of mind for many privacy professionals across the U.S., who are working to leverage their GDPR preparation to build CCPA-compliance programs. They are learning that while their recent GDPR preparation is helpful, the CCPA has nuanced requirements that go be...
END_OF_DOCUMENT_TOKEN_TO_BE_REPLACED queue Save This

Greetings from Portsmouth, New Hampshire! It’s the second week of April, and we hope this week’s snowfall was the last of the season. While everyone here is well accustomed to frigid spring temperatures, we are looking forward to the warmth of Washington during the Global Privacy Summit in just a c...
END_OF_DOCUMENT_TOKEN_TO_BE_REPLACED queue Save This

On Feb. 27, the National Institute of Standards and Technology released an outline of its forthcoming Privacy Framework, providing the first real glimpse of what the framework might include and calling attention to the need for privacy workforce development. NIST Senior Privacy Policy Advisor Naomi ...
END_OF_DOCUMENT_TOKEN_TO_BE_REPLACED queue Save This

This week the European Commission took noteworthy steps on several fronts. These are mostly procedural, but still significant for a number of reasons. Effective judicial remedy On 26 Jan., the European Commission launched an infringement procedure against Belgium for the lack of judicial remedy af...
END_OF_DOCUMENT_TOKEN_TO_BE_REPLACED queue Save This

Though data anonymization offers a reprieve from some of the “onerous requirements” of the EU and U.K. General Data Protection Regulations, VeraSafe’s Scott Quellhorst and Renata Valkova, CIPP/E, CIPP/US, write that practitioners are left with unclear guidance as both jurisdictions create diverging ...
END_OF_DOCUMENT_TOKEN_TO_BE_REPLACED queue Save This
GDPR One Year Anniversary - Infographic

Companies and regulators alike worked hard to prepare for and then implement GDPR requirements. Both saw increases in staff and resources, but those paled in comparison to the influx of complaints, data breach notifications, fines and data protection officer registrations. What can we learn from this intense activity? Check out this new IAPP infographic to learn about GDPR’s first year in numbers.