In the second in a series of meetings to develop a voluntary code of conduct around the application of facial recognition technology, the scope of the code was debated. Led by the National Telecommunications and Internet Administration’s (NTIA) John Verdi, the talks centered around whether or not there should be a dual use structure for facial recognition’s commercial and government use; specifics on how the technology actually works and links with databases, and how much more time should be spent fact finding on facial recognition.

At the opening of the meeting, the NTIA made it clear the focus of the talks should be on the commercial application of facial recognition, but the Center for Digital Democracy’s (CDD) Jeffrey Chester pushed back: “I suggest we focus on the dual use aspect to understand collection and use and what that means for a code.”

Chris Calabrese of the American Civil Liberties Union (ACLU) agreed, noting that the use of facial recognition by government agencies can impact commercial use. “Without understanding those things,” Calabrese said, “I don’t see how I can tell anyone this is a privacy-protective code.”

Verdi said the scope of these talks is very important to move things forward. “What I’m trying to do is to articulate the scope for this process without having to decide today about what is in scope or not in scope,” he said, adding, “I’m just reminding the group that commercial use should be our focus.” 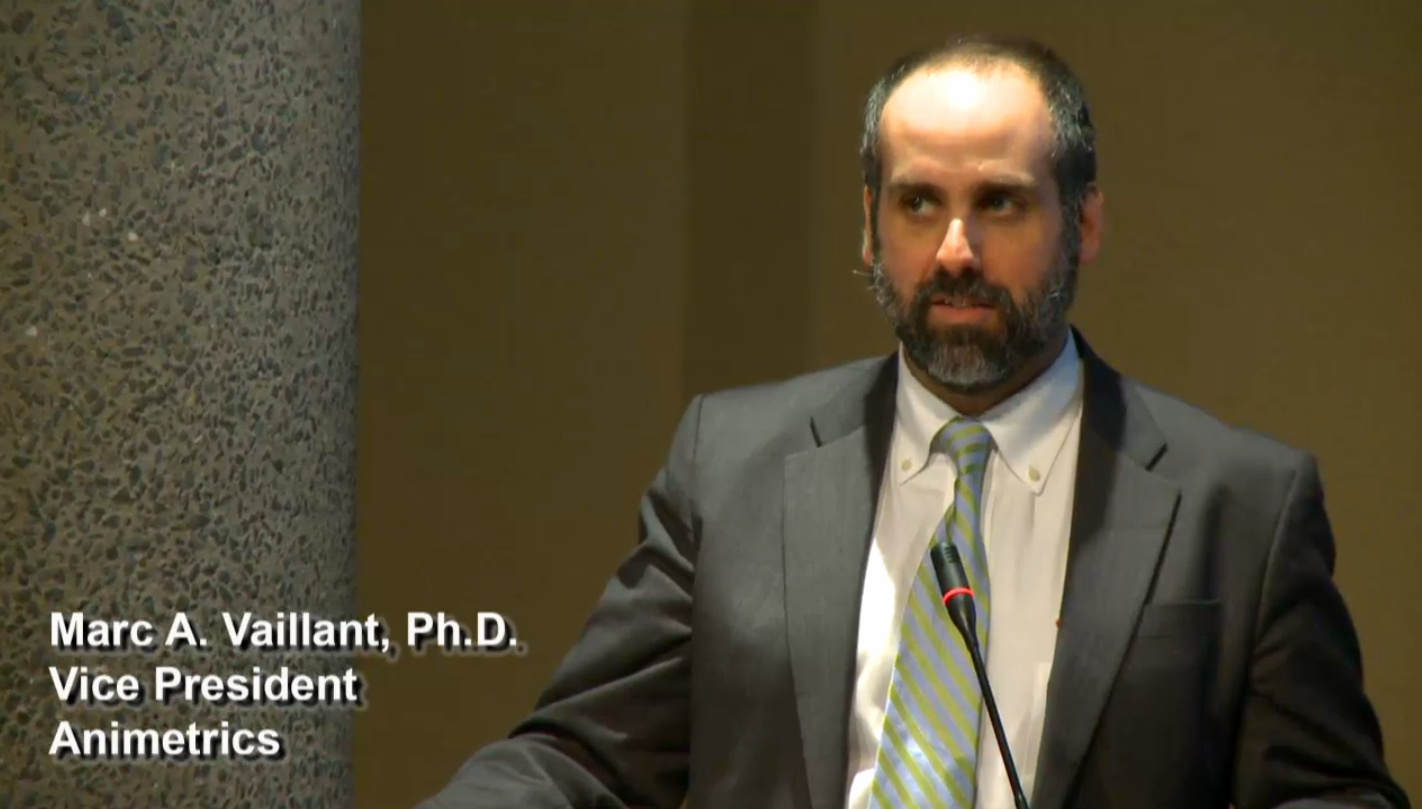 Looking Under the Hood

To further “look under the hood,” Animetrics Vice President Marc A. Vaillant presented an in-depth view into how facial recognition technology works. He noted the two main methods of facial recognition: a one-to-one verify method and a one-to-many match method. The former is generally used for authentication, while the latter can be used more broadly to attempt to search for a face.

Vaillant said that the template is decoupled from the identifier and also stressed that a template cannot be reverse-engineered back to the original image, a claim later disputed by Michelle Chibba, director of policy and special projects at Ontario’s Information and Privacy Commission.

Finding a facial recognition match is primarily based on “a statistical score between two face biometric templates,” Vaillant said. When attempting to match templates, a facial recognition system must define its error rates. A false accept is when a system claims a match when in fact it is not true, while a false reject claims a mismatch when in fact the faces are the same.

Vaillant also noted the existing difficulty of correctly matching photos because of variations in lighting, position of face, hats, glasses and other physical variables. He noted there is 3D technology being developed to better identify photos, but, “As of today, facial recognition technology cannot reliably match face templates to identities based on photo harvesting of uncontrolled images from social networks, let alone in a video surveillance environment, without forensic support.”

Not everyone, however, agreed with some of Vaillant’s assertions. Alvaro Bedoya, chief counsel for the Senate Judiciary Committee on Privacy, Technology & the Law, cited the work of Joseph Attick, who has said that for “anyone who has been following the progress of facial recognition, the obstacles are quickly evaporating.”

Vaillant conceded that the technology is “making tremendous progress,” but noted that the use of facial recognition technology in the search for the Boston Marathon bombers was unsuccessful.

Steve DelBianco, the executive director of Netchoice, which represents businesses including eBay, Yahoo and Facebook, pointed out that biometric templates, because they often use proprietary algorithms, would likely be different, thereby making the connection of databases difficult.

This assertion was countered by Chibba and another biometrics expert, who said that databases, in fact, can be linked by the images themselves and that biometric templates can be reverse-engineered.

Matthew Young, a manager at Sotera Defense Solutions’ Biometric and Identity Intelligence Programs, also provided technological expertise, and presented the International Standards Organization’s Biometric Model to show how data is captured, processed and stored in a given system. 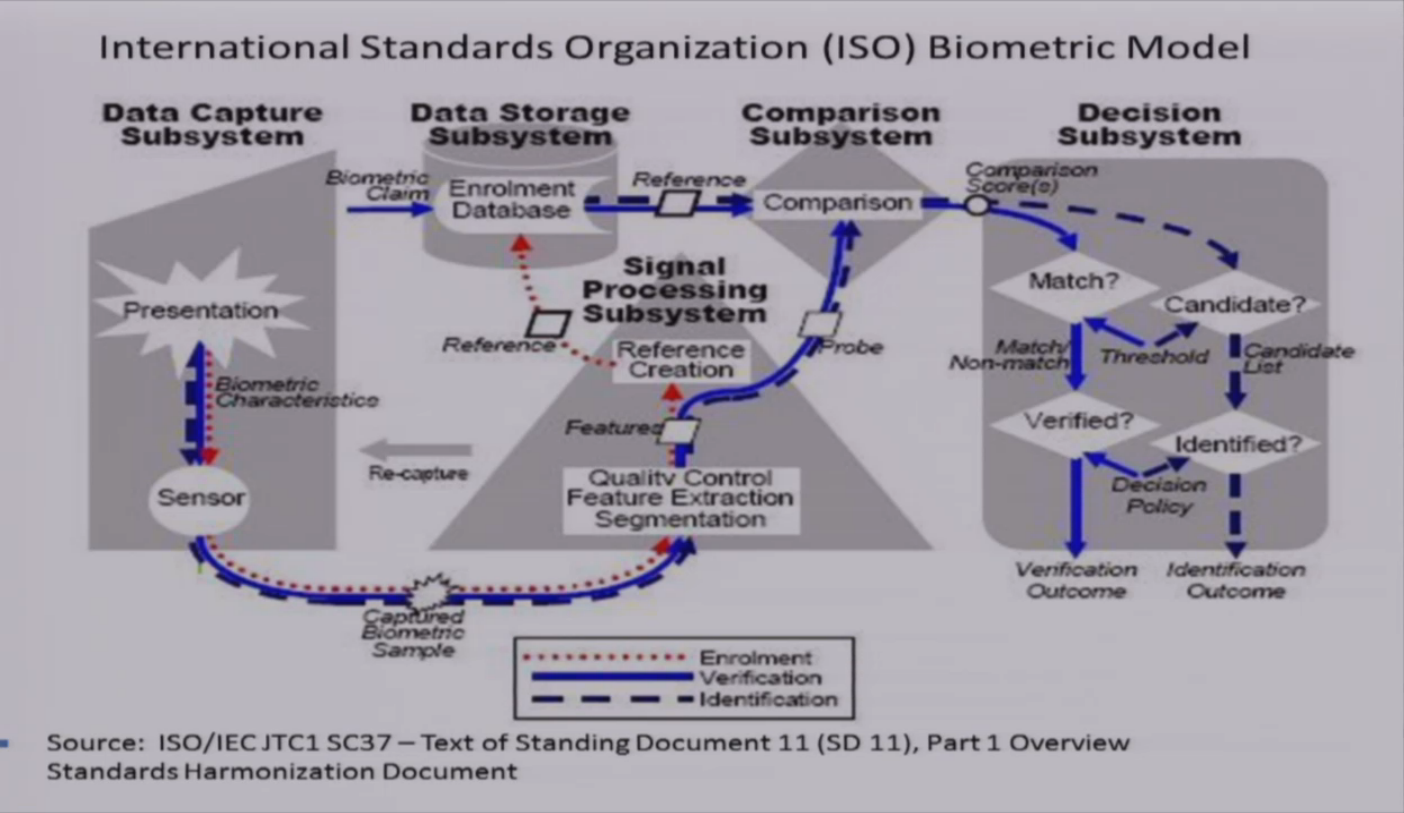 It was clear that understanding the facial recognition landscape is a difficult one, and nailing down the scope of what should be covered has yet to be set in stone—though the NTIA’s Verdi stressed it must focus on commercial use. To help narrow down the scope, Verdi urged stakeholders to send in or highlight what use cases they would like to address. By the next meeting, on March 25, Verdi hopes to have a more robust use case list to help guide the discussion moving forward.

The CDD’s Chester called for representatives from Google and Facebook as well as top officials from the Federal Trade Commission and the Article 29 Working Party to present at future meetings. Alvaro Bedoya echoed Chester, urging for more experts on facial recognition in the commercial sphere.

Janice Kephart of the Secure Identity and Biometrics Association was concerned with the current law and enforcement, plus, she asked, “What exactly is the law we’re going to be dealing with? What is the FTC’s relationship to this?”

Other stakeholders queried whether it would be worth bringing other regulatory authorities in to discuss possible enforcement implications, including the Consumer Financial Protection Bureau.

“I don’t want anyone to misunderstand that this effort will trump other regulatory authorities,” Verdi reminded stakeholders. “We’re not trying to encourage that.”

TechFreedom President Berin Szoka urged stakeholders to remember that the potential code is voluntary to businesses and only enforceable by the deceptive prong of Section 5 of the FTC Act. “Frankly, the only thing that matters is whether a company comes to the table to agree, then the FTC can take action” if there’s actionable deception, he said. “Otherwise, other regulator presentations don’t matter. If an issue is raised that would concern another enforcement body, perhaps we should not consider it in this specific code.”

“I suggest we work together on the fact-finding so that we can begin to think about a code,” Chester said. “Today, what’s been raised to me are more questions. There are standards we need to think about, technologies we need to learn about. We need to do due diligence before we get a code.”

Calabrese agreed, but warned against getting weighed down in too much fact-finding. “We don’t want to be five or six meetings in without a code,” he said, suggesting one more meeting focused on fact finding.

Read more by Jedidiah Bracy:
Privacy Law Symposium Delves into the Difficult Privacy Issues of the Digital AgeBreaches and Calls for Mandated Data Security Persist
Target and Neiman Marcus: We Did All We Could
Justice Dept. To Allow Some Transparency; More Surveillance Programs Revealed

Can a Code of Conduct Be Built, And Will Anyone Abide by It?

Last year’s National Telecommunications and Information Administration (NTIA)-initiated and stakeholder-driven code on mobile app transparency was a success, most participants would tell you. But the NTIA’s latest effort on facial recognition technology faces a different hurdle: Can a vo...
END_OF_DOCUMENT_TOKEN_TO_BE_REPLACED queue Save This

Can a Facial Recognition Code of Conduct Be Built for a Technology So Nascent? And Will Anyone Abide by It?

Last year’s National Telecommunications and Information Administration (NTIA)-initiated and stakeholder-driven code on mobile app transparency was a success, most participants would tell you. But the NTIA’s latest effort on facial recognition technology faces a different hurdle: Can a voluntary code...
END_OF_DOCUMENT_TOKEN_TO_BE_REPLACED queue Save This

The privacy landscape in the U.S. is undergoing a major revamping. In December, the Federal Trade Commission (FTC) and the Department of Commerce (DoC) separately proposed new policy frameworks for analyzing data privacy. These proposals are the culmination of separate—and comprehensive—reviews cond...
END_OF_DOCUMENT_TOKEN_TO_BE_REPLACED queue Save This

The application developer Alliance, and its member Intuit, maker of Quicken and Quickbooks, here at the IAPP Global Privacy Summit announced Intuit will provide developers with open source software code to implement at-a-glance mobile app privacy notices. The code will allow app developers to co...
END_OF_DOCUMENT_TOKEN_TO_BE_REPLACED queue Save This

Greetings. As the week of the inauguration of President Joe Biden and Vice President Kamala Harris ends, it feels like a new chapter in a book we cannot put down is beginning. That is certainly true in the world of privacy, with the regulation of Big Tech being one of the main policy issues the inc...
END_OF_DOCUMENT_TOKEN_TO_BE_REPLACED queue Save This