This morning at the Bellagio in Las Vegas, Privacy. Security. Risk. attendees honored the winners of the 2015 IAPP Privacy Vanguard Award and the 13th Annual HP-IAPP Privacy Innovation Awards.

Hogan Lovells Partner and Director of the Privacy and Information Management Practice and Co-Chair of the Future of Privacy Forum (FPF) Christopher Wolf was recognized with this year’s IAPP Privacy Vanguard Award. Hailed as a trailblazer in the privacy profession and described as a “Dean of the Industry,”Wolf was one of the first practicing attorneys to focus full-time on privacy after successfully litigating McVeigh v. Cohen in 1998 win against the U.S. Navy for violating the electronic privacy rights of a gay sailor. 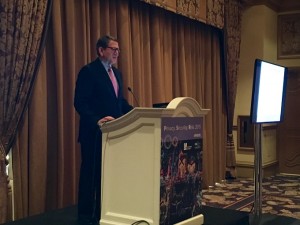 Christopher Wolf is honored with the 2015 IAPP Privacy Vanguard Award

FPF Co-Chair and Executive Director Jules Polonetsky, CIPP/US, is among those who have spoken to Wolf’s contributions.

“Chris is a pioneer in privacy and data protection, and a true ambassador for our profession,” Polonetsky said, adding, “While counseling clients, he has founded a think tank, helped lead organizations supporting civil rights and the arts, fighting poverty and assisting the home bound. And he has done so with grace and class at all times.”

Wolf, who has been practicing law since 1980 and helps lead Hogan Lovells’ team of 27 full-time privacy lawyers, founded the FPF in 2008. His other credits include:

As IAPP President and CEO Trevor Hughes, CIPP, put it, “Chis Wolf epitomizes a privacy vanguard. His commitment to internet privacy brought awareness to an aspect of the industry previously unthought-of. He continues to grow the industry through his investment in both law and academia.”

In her speech announcing Wolf’s selection as the recipient of this year’s Privacy Vanguard Award, FPF’s Brenda Leong noted Wolf is also known as the “pioneer in privacy law” and “has had a hand in advising and shaping thinking on many leading-edge issues including Internet speech, Internet hate speech and government access to information held by cloud and other companies.” 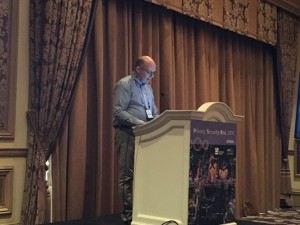 “HP is proud to again sponsor these prestigious awards, which recognize unique programs and services in global privacy and data protection in the public and private sectors,” said HP VP and CPO Scott Taylor, CIPP/US, who is also past chairman of the IAPP Board of Directors. “All of the organizations to be honored today have created outstanding programs or services which integrate privacy in a way that elevates its value as both a competitive differentiator and a centerpiece of customer and citizen trust. 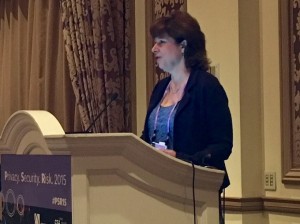 Intuit, in the large organization category with more than 5,000 employees, was recognized for its Data Use Guideline Tool (DUG). DUG brings Intuit’s Data Stewardship Principles to life by putting common and complex data use issues and decisions with the technical development teams. DUG contains a rules engine with more than 1,000 entries and covers applicable laws, requirements and regulations from the U.S., UK and Canada.

TeleSign, in the small organization category , was recognized for its privacy culture and Turn It On campaign, which urged consumers to protect their online accounts by turning on two-factor authentication and reached hundreds of millions users worldwide. TeleSign CPO Stephen Bolinger, CIPP/E, CIPP/G, CIPP/US, CIPM, also traveled to the company’s locations to conduct in-person privacy trainings for each employee. The company is also integrating privacy into its products, with regular privacy reviews in the product development lifecycle. 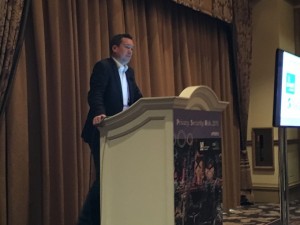 AirWatch by VMware, in the innovative privacy technology category, was recognized for Privacy First, an initiative that aims to develop product features to help organizations comply with privacy principles by default while providing transparency, access and choice to end-users. Features are developed with privacy concerns of both the IT administrator and the end-user in mind. This allows for simple administrative configurations for compliance with complex privacy laws and regulations while providing end-users with tools to stay informed. 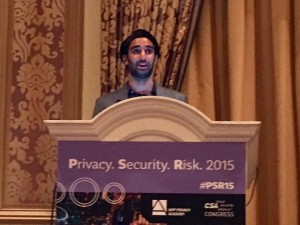 “Intuit, TeleSign and VMware are forging new paths for businesses worldwide, and ensuring that the privacy of their employees, customers and business intelligence is never taken lightly,” Taylor said.

Utah Chief Privacy Officer Christopher Bramwell, CIPM, informed StatesScoop the state has surpassed its goal of training 50 government workers in privacy management. He said 59 state employees will have completed certified information privacy management certification courses from the IAPP by the end...
END_OF_DOCUMENT_TOKEN_TO_BE_REPLACED queue Save This

Apple announced Wednesday a suite of data security improvements it plans to roll out in the coming months that aim to protect consumer data and ward off hackers.  The three data security features include iMessage Contact Key Verification, Security Keys for Apple ID and Advanced Data Protection for ...
END_OF_DOCUMENT_TOKEN_TO_BE_REPLACED queue Save This

The privacy community is mourning the loss of Brazilian data protection scholar Danilo Doneda, who died Sunday, Dec. 4 at the age of 52. Doneda, a member of the IAPP board of directors, pioneered Brazil’s General Data Protection Law and was dedicated to bringing privacy rights to Brazilians. IAPP St...
END_OF_DOCUMENT_TOKEN_TO_BE_REPLACED queue Save This

Participate in the IAPP-TRU Salary Survey

The IAPP is calling for respondents to take part in the annual IAPP-TRU Salary Survey. The anonymous survey provides insights into the salaries and additional compensations of privacy professionals and their teams. This year's survey is expanded to include both in-house and external privacy roles, t...
END_OF_DOCUMENT_TOKEN_TO_BE_REPLACED queue Save This