When Glenn Greenwald addressed the 3,000 privacy professionals who came to hear the now-famous journalist speak here at the IAPP Global Privacy Summit, his message to them was plain and simple: You have the power to change the injustices that exist and, in fact, as a citizen of the world it’s your duty to do so.

Greenwald, who’s profile was elevated further with a recent Oscar win for the film he created with documentarian Laura Poitras, said while he’s spoken on hundreds of stages in dozens of countries about his involvement in the Snowden revelations, he was most excited about speaking to the IAPP community because the ability to create real change in the way privacy rights are protected and the way democracy itself is being subverted “lies with the people in this room.”

“That might sound like a heavy or dramatic responsibility to place on your shoulders,” he said. “But I actually think it’s really true.”

Since it was revealed that the U.S. National Security Agency (NSA) and its allies not only conduct mass surveillance on citizens all over the world, but do so under the institutional mandate, “Collect it all,” the question Greenwald is asked most, he said, is “what has changed?” And the simple answer is nothing. Despite great debates around the globe about the role of government in free societies, no laws have passed and NSA headquarters still stands in tact—doors open, employees clocking in each day.

But when he released the Snowden revelations, he never really expected limitations to be placed on the U.S. government by the U.S. government. That’s not generally how political power works, anyways. “People don’t walk around thinking about how to limit their own power,” Greenwald said. 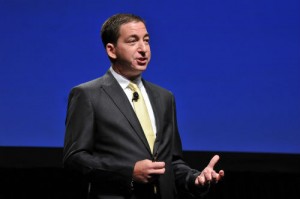 But what has changed is that individuals around the world now realize for the first time the threat posed to their own privacy by mass surveillance. This is indicated in part, Greenwald said, by studies showing steep increases in global use of encryption. And that means something.

“Encryption is a very serious barrier between the ability of the U.S. and its partners and your communications,” Greenwald said. “It’s a serious problem. The way I know it’s a serious problem is I happen to have many tens of thousands of their most secret documents, and they spend a great deal of time very worried about the way (the citizenry) will use encryption if they understand surveillance.”

Encryption then is a “very real and very important change that can provide a great barrier on the ability of the U.S. and other governments to invade privacy.”

But beyond the technical, there’s a more philosophical shift that has to happen among companies like the ones the privacy pros in the room work for, he said. Privacy pros must decide to exercise their own power for the sake of privacy and democracy.

“We’re at the crossroads of determining how the Internet will be used, and it’s not fatalistically predetermined, it’s a byproduct of our choices, choices we make every day,” he said. “I really do believe the choices you make as privacy professionals or activists or people working within the companies that now control so much of our data will play as a big of a role if not a bigger role than any other single factor in determining what the Internet will actually be.”

But no, Greenwald said. It’s exactly those kinds of people who’ve always stood up against dictatorships or tyranny: There was Rosa Parks, an average woman who just wanted to ride the city bus who changed the course of the Civil Rights Movement; the Tunisian street vendor who set himself on fire in protest of the government, starting the Arab Spring, and then were was Snowden.

What was extraordinary about Snowden was how very ordinary he was, Greenwald said. When he flew to Hong Kong with Poitras to meet this anonymous source who’d sent only very cryptic messages saying he had damning evidence against the U.S. government, the two were not expecting a 29-year-old baby-faced kid who’d grown up in Virginia in a lower-middle-class military family with no family connections or wealth or power of any kind. It was this very ordinary man who saw what he thought to be a great injustice and couldn’t help but confront it. His conscience wouldn’t let him watch idly by.

“It’s very easy if you think about injustices to tell yourself you would like to do something about this but you’re simply somebody who lacks the power to do anything about it,” Greenwald said. “To me the story of Edward Snowden should be the permanent antidote to that kind of defeatism. Whatever else you think of him, he changed the world.”

The Biden administration released the first U.S. artificial intelligence framework Oct. 4, Nextgov reports. Following the release, the heads of several federal agencies spoke on their plans to implement the national AI blueprint. Department of Education Secretary Miguel Cardona and Department of Hum...
END_OF_DOCUMENT_TOKEN_TO_BE_REPLACED queue Save This

The value of a UK representative

In July, the U.K. introduced the Data Protection and Digital Information Bill and its proposals to reframe the data privacy framework. Not included in the public consultation but proposed in the bill was the removal of the requirement of a U.K. data representative. Prighter’s Charlotte Mason and And...
END_OF_DOCUMENT_TOKEN_TO_BE_REPLACED queue Save This

'Data transfer theater:' The US and Israel take the stage

This week, U.S. President Joe Biden is expected to sign an executive order cementing the legal basis for the Trans-Atlantic Data Privacy Framework, aka “Privacy Shield 2.0.” The executive order will likely create a redress mechanism, which will allow European individuals to challenge — or at least g...
END_OF_DOCUMENT_TOKEN_TO_BE_REPLACED queue Save This

U.S. President Joe Biden is expected to sign an executive order for the Trans-Atlantic Data Privacy Framework to help stand up EU-U.S. data flows. Meanwhile, Israel's government issued a draft decision to grant independent status to Israel's Privacy Protection Authority that paves the way for the co...
END_OF_DOCUMENT_TOKEN_TO_BE_REPLACED queue Save This