Have you checked out the page views for your privacy policy lately? Do they require a third digit? Right, probably not, but that doesn’t mean they don’t provide value for you, your organization and, yes, even your customers, especially if you’re a start-up or app developer. Do you think app revenue will undergo a paradigm shift from one that is predicated on advertising dollars to one driven by privacy-enhancing innovations?

It won’t be policy, but the marketplace that will determine such a shift.

These were some of the discussions during Wednesday’s workshop held by Fordham University’s Center on Law and Information Policy. More specifically, at issue during the early panel was the role notice, consent and consumer control play in the startup and application-developer ecosystem. Should we regulate the actions app developers must take, or should we let consumers police the market with their purchasing decisions?

“If we’re going to personalize our services,” said Application Developers Alliance Vice President for Policy, Law and Government Affairs Tim Sparapani, “we should turn to our customers as partners.” He explained that organizations, regulators and the media spend too much time considering theoretical risks, instead of paying attention to real problems. Instead, he said, “we need targeted solutions and we should be building real consumer redress mechanisms. We need to make consumers whole when we make mistakes.”

Johnathan H. Gordon, general counsel and senior vice president for IAC Search/InterActiveCorp, which includes sites such as Ask.com and Dictionary.com, queried whether startups are even doing that great of a job explaining their privacy policies to users. Maybe not so much?

But does that mean privacy policies carry little value for consumers? 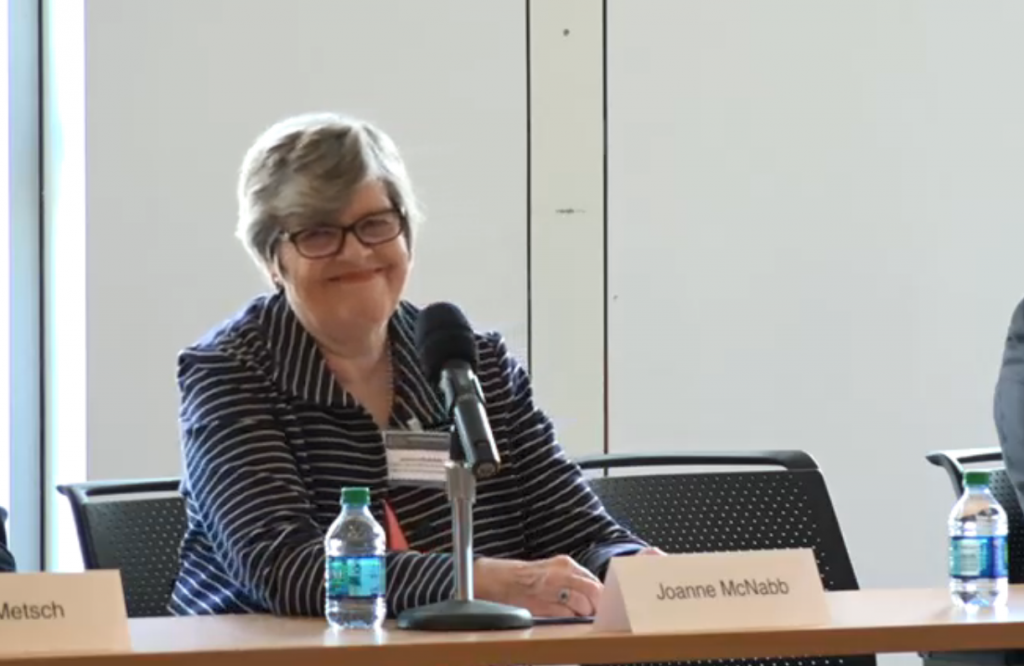 “I want to make the case for the unread privacy policy,” said California Office of the Attorney General Director of Privacy Education and Policy Joanne McNabb, CIPP/G, CIPP/US, CIPT. “It still benefits the consumer by promoting governance and accountability,” she argued. Privacy policies “force organizations to become aware of their data practices, and to some degree, express them and therefore stand behind them,” McNabb added.

Denton Partner Andy Roth pointed out that privacy policies have “been the anchor of enforcement actions and class-action lawsuits” and not just governance.

But privacy policies are just one aspect of a bigger picture for startups and app developers. Gordon explained that monetization is the biggest struggle he faces in the app-development market. The $1.99 a consumer pays for an app is not how app developers make money.

“Advertising is the oil in the system,” said Roth. Yet, he also sees an alternative model that is not purely based on ads. “Tinder has been doing great because they found a different monetization strategy by having users pay for a premium service.”

“Yes,” admitted Gordon, Vimeo, as another example, charges users to upload videos, but “there’s still nothing like ad monetization, especially for startups.”

Additionally, it’s not the younger generation of users who are freely giving away their privacy, Roth said. “Really, it is grandma and grandpa giving away all their data on Facebook. Kids are on Snapchat.” He argued that the early iterations of social networking have been predicated on sharing, but now younger users are getting more savvy and less willing to share as openly.

“Social has matured,” Roth said. “The next biggest social network will be an anti-social network.” He explained that market forces are what ultimately will drive startup and app services to be more privacy conscious. “McDonald’s never sold salads until it was profitable,” he pointed out.

However, George Washington University Lead Research Scientist Anna Slomovic suggested that health fitness apps and wearables, combined with employer wellness programs, for example, would not be subject to market forces.

“I don’t want to wait for an omnibus privacy law that will never happen,” App Developers Alliance's Sparapani said. “Corporations have to step up” and give their consumers the partnership, control and means for redress to maintain a trusting relationship.

In fact, Sparapani argued, after facing years of criticism by regulators and the media for poor or hazy privacy practices, the app industry may now be more privacy advanced than other more traditional industries.

“Ironically,” Sparapani said, “the app industry is way ahead of other industries. The scrutiny we have faced has forced” the industry to strengthen their privacy notices and controls. “You don’t see this in brick-and-mortar retailers,” he said, “and older industries haven’t done as much as we have.”

His Task? Start Up a Privacy Program at a Start-Up

1
For a new CPO challenged with creating a privacy program, step one developing an internal policy, of course. But policy doesn't create a "culture of privacy" at an organization, which is essential to a successful privacy program. In part two of this quarterly series, Stephen Bolinger, CIPP/E, CIPP/G...
END_OF_DOCUMENT_TOKEN_TO_BE_REPLACED queue Save This

1
It is not in Silicon Valley’s culture, the conventional wisdom runs, to hold up the next great billion-dollar app because of a few questions about privacy concerns. Who owns that data? Do you have consent to use it that way? Won’t users wonder why you need access to their microphone? Sam Pfeifle rep...
END_OF_DOCUMENT_TOKEN_TO_BE_REPLACED queue Save This

Never has the mobile app ecosystem been as popular and dynamic as it is now. Smartphones and the use of mobile apps are practically ubiquitous and are giving the economy a needed boost. With that boost, though, come very unique privacy concerns and challenges. And privacy regulators have taken notic...
END_OF_DOCUMENT_TOKEN_TO_BE_REPLACED queue Save This

Industry-wide, whether they are fun games, serious tools or educational resources, mobile apps continue to access, collect and use private data stored on smart devices while customers remain largely ignorant of and disempowered by these practices. Key reports issued this winter, coupled with recent ...
END_OF_DOCUMENT_TOKEN_TO_BE_REPLACED queue Save This

3
The Globe and Mail ran a story recently where they claimed that “start-ups don’t care about privacy,” even in this post-Snowden era. I was bemused by that statement. I’ve advised start-ups even in the pre-Snowden era, and smart ones took privacy seriously because they realised that getting it wrong...
END_OF_DOCUMENT_TOKEN_TO_BE_REPLACED queue Save This