Following years of developing military interoperability communications systems and founding his own company, Julian Ranger began investing in various startups, one of which was devising a way to back up social data.

From there SocialSafe was born, and social media users were able to have all of their information at their fingertips, giving them the opportunity to gain insight into their data. As time went on, the company focused on more than just information pulled from Facebook and Twitter.

SocialSafe turned itself into Digi.me, an app where users can store all of their information in one encrypted resource. Rather than just social media data, users can now store financial, fitness and medical data, with future data storage options coming down the pipeline.

“In its very simplest terms, Digi.me turned into a librarian for individuals,” said Digi.me Executive Vice President of Interoperability Jim Pasquale. Just as you go to a library with a list of books, the librarian goes and gets that pile of books, brings them to you and places them in your hand. They never open them and read them, but we like to say for the individual and for businesses, we never see, touch or hold data ever.”

I downloaded Digi.me to give it a test run and linked my Facebook, Twitter and Instagram accounts to the app to see my library of mundane Facebook statuses, tweets and pictures of my pet cat. 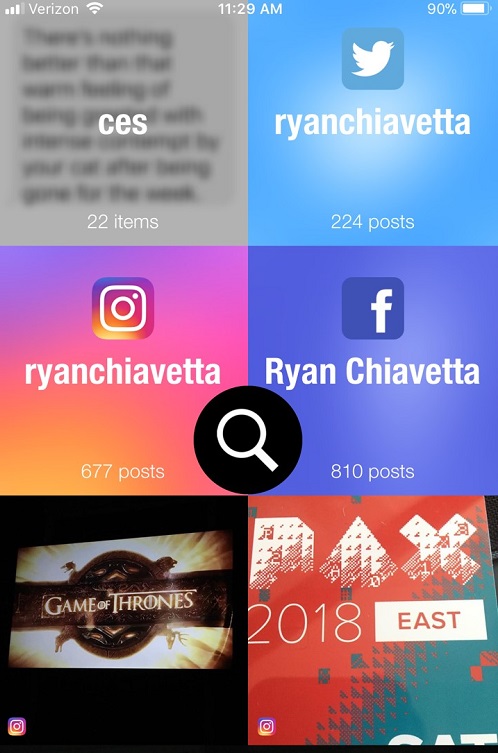 Linking the accounts to Digi.me took a matter of seconds, and it was cool to see hundreds of posts uploaded in real time. The app gives you the ability to bunch posts into their own folders. I chose to take a bunch of tweets and photos from my time at CES 2018, and cleverly labeled the folder, "CES."

Digi.me also allows users to see all of the interactions they gathered from their posts. I saw that three people liked my Facebook picture telling the world I was going watch Game of Thrones again. What a memory to cherish.

For businesses, Pasquale likened Digi.me to a postal service. An organization can either pay 10 cents each time they make a data inquiry, or three dollars per user per year for unlimited requests for personal data. He claims Digi.me provides businesses with more accurate information from a larger group of subjects than an enterprise could receive from a data broker.

Digi.me protects all of the information with end-to-end encryption, and provides users with the opportunity to pick Dropbox or Google Drive to act as the cloud storage service. The app’s consent access feature then lets users choose when they can exchange their data for a service.

Pasquale offered a use case for Digi.me during a demo for Privacy Tech. In it, he shared the health care information of a couple of volunteers.

The health information included the doctor who made the diagnosis, the patient’s status, the date of the appointment, and definitions of different medications. One volunteer was diagnosed with a cervical root disorder, and when changes were made in the patient’s electronic health record, they appeared in Digi.me in real time.

“Let’s say this person went to a specialist who isn’t a member of that hospital system,” said Pasquale. “On a very simple device, the individual can go out and show them all of the medications and all of the diagnoses that they had when they went to the hospital. This is literally having all of your medical information at your fingertips.”

The app allows users to share data in two different ways. Private sharing ensures the data never leaves the device attached to the virtual private cloud. “If I was on a mobile device and I saw that there was a certificate needing to be authorized or denied, with private sharing the data gets collected, and an algorithm runs in a separate partition, and the data is never taken out the personal cloud, only the results are shared with private sharing,” said Pasquale.

The other option for sharing data is when an enterprise actually removes the information from the user's cloud. The party asking for the information will need to specify how long they will have the data after they complete the task it was needed for, and if they will be sharing it with anyone.

In order for data to flow in any instance, five categories need to be addressed within the consent access certificate: What data is being asked for; how will it be used and shared; can a user request their right to be forgotten; and will any value be exchanged as a result of the data being shared.

Companies can use Digi.me for their GDPR-compliance efforts by showing all of the information they have on a data subject. Pasquale said the company can download software to create the certificate displaying all of the data subject’s information, and if the subject authorizes a transaction, a consent receipt is generated. The receipt is then sent to the user’s consent access dashboard, and the company receives a record acknowledging the subject consented to having their data used.

All of the features cycle back to the app’s number one goal: to ensure users always have their information just a few taps away.

“We truly believe that, not only for apps, but individuals should be able to have all their personal information at their fingertips, and at the same time, be able to know the data, not just share the data,” said Pasquale.

Company offers data retention schedules from around the world

2
Organizations are fine tuning their compliance efforts around the EU General Data Protection Regulation ahead of its May 25 implementation date, and as the days fly by, tech vendors are responding by releasing more and more specialized products to assist in those efforts. While data subject access ...
END_OF_DOCUMENT_TOKEN_TO_BE_REPLACED queue Save This