I came to Las Vegas and the Consumer Electronics Show to talk privacy, but it sometimes felt a lot like talking about fuel economy at a NASCAR race: Sure, people acknowledged it was important, but WOULD YOU LOOK AT HOW FAST THOSE THINGS ARE GOING!

Ultimately, CES is about cool stuff. Features. The newest of the new. And it's true that the show can be absolutely amazing. As a music lover, I found myself drooling over wood-backed headphones and daisy-chained wireless speakers.

You know what everyone else was drooling over? Drones. Here's what just one of the many, many drone booths looked like: 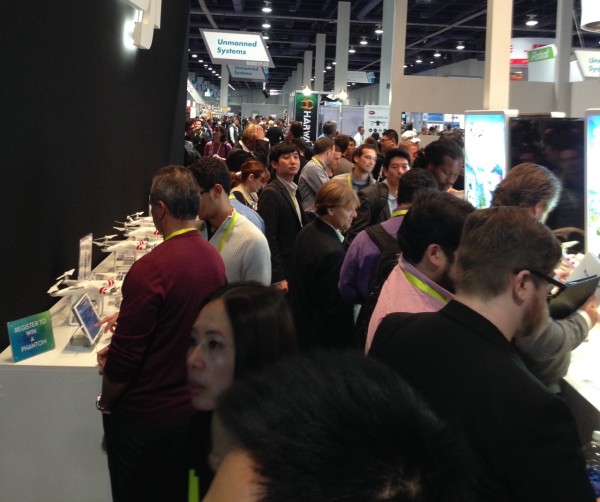 It was like being at a great rock concert. Shoulder to shoulder. Here's another booth (note the netting - it's a requirement that all drone demonstrations be done in a controlled setting of some kind): 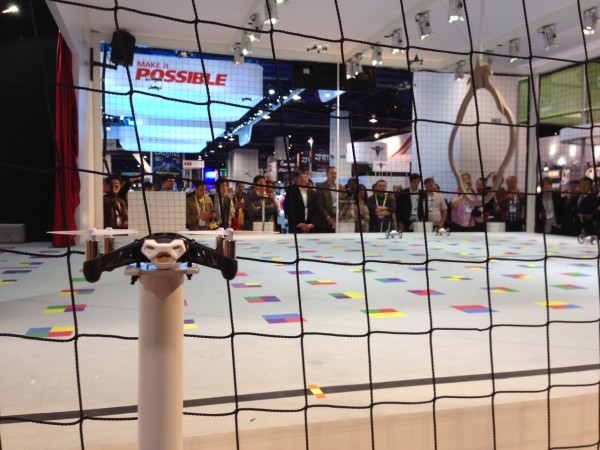 People just couldn't get enough. Why? Just because they're cool, I'm pretty sure. They can work together. Fly in tight spaces. People at CES, in general, seem to basically be big kids at heart, and what kid doesn't like toys?

You know what just about all the drones have attached to them, though? Yeah, cameras. How about this one, with 1080p video that can stream up to a kilometer in real time to a viewing screen that's built into the remote control? 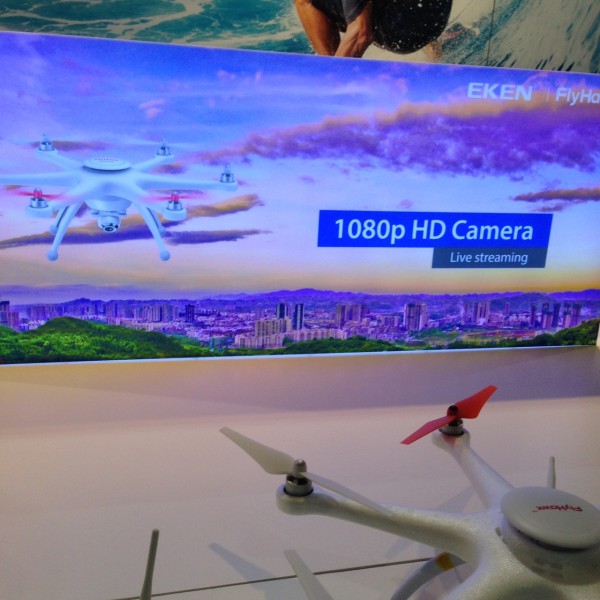 I asked the guy at the booth: "What kind of questions do you get about privacy?"

"Well, we tell people they shouldn't fly them in cities or where there are other people."

"But people can fly them wherever they want, right?"

Which isn't totally true. The FAA was actually manning a booth to talk about drone safety, and reminded folks about the 400-foot ceiling and that they can only be used by "hobbyists," not commercial operations. But let's just say those sorts of caveats were not overtly advertised in the marketing materials. 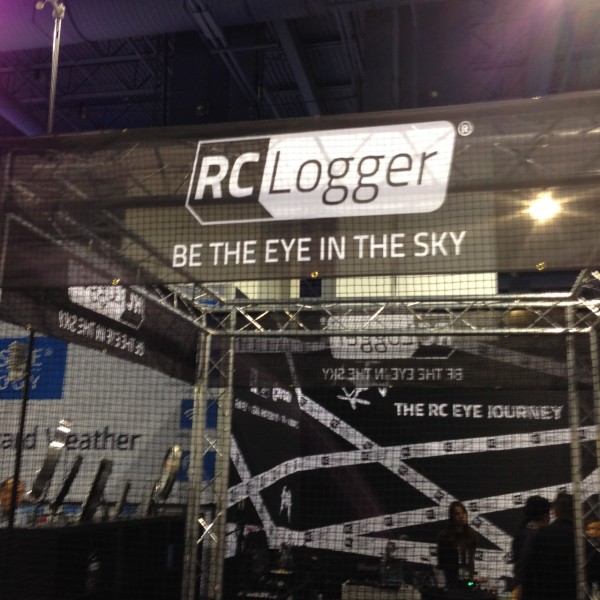 Suffice it to say, while there were plenty of people saying thoughtful things about privacy at CES, the drones section was pretty much all about the features. I don't think there were too many privacy pros employed on those development teams.

One company even touted the ability to sync a drone to a tracking device so that you could have it follow you wherever you go, like grab an aerial view of you mountain biking or four-wheeling or skiing. The geek in me thought that was about the coolest thing ever. I'd love to watch aerial footage of me and the kids skiing. What a blast!

But, well, what if you put that tracking device on your ex's car? Or the paparazzi put it on a celebrity's vehicle when no one was looking? Are privacy pros the only ones who think like that? Should there be some literature about things you really shouldn't do? Some kind of failsafe so that it couldn't be used in that way? I'm really not sure.

And these are not questions being asked in a vacuum. There is a full slate of legislative efforts to regulate privacy pending across the U.S. Just yesterday a story appeared in a suburban Chicago paper, populated with residents concerned about drone video being posted to YouTube. Of course, the comments seem to indicate some residents are more than okay with drones overhead.

Certainly, Intel has a great group of privacy pros, and their booth, full of some of the coolest stuff I've ever seen in my life, also featured one of the craziest drone examples, mashing together the drone and wearables trend with an actually wearable drone: 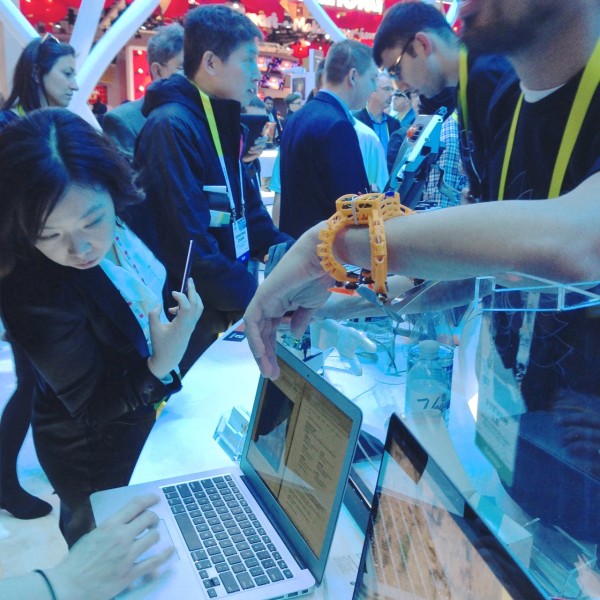 You straighten out those orange arms on the guy's wrist and, boom, you've got a quad copter that you can control with your phone. Just nuts.

I'm not one to be all, "technology is outpacing our ability to control it! Robots are going to be farming us for electricity!," but I guess I was a little surprised that no one seemed to be asking the question: Would anyone NOT want to be able to do that? There was this seemingly tacit agreement that OF COURSE you would want to be able to fly a camera in the sky and capture aerial views of just about everything.

But maybe I'm standing next to you and I'd rather not be in your video. What then?

Similarly, as you might have guessed, everything and anything on the show floor just had to be connected: Your lightbulbs and your thermostat and your home surveillance cameras and your coffee maker (yes, really) and your television. Especially your television: 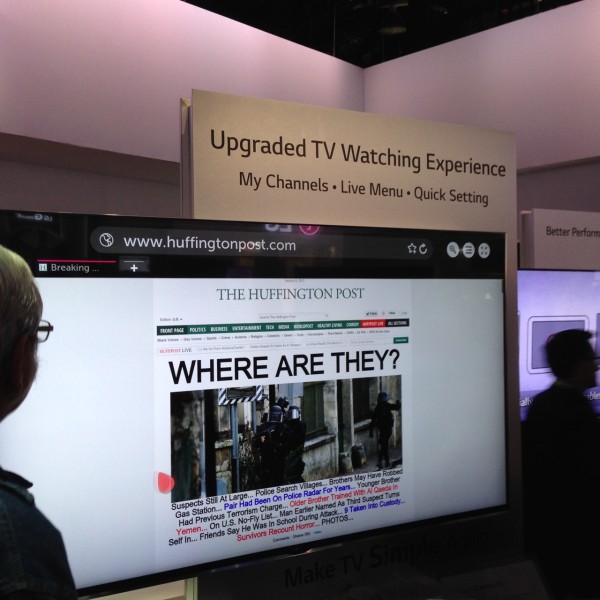 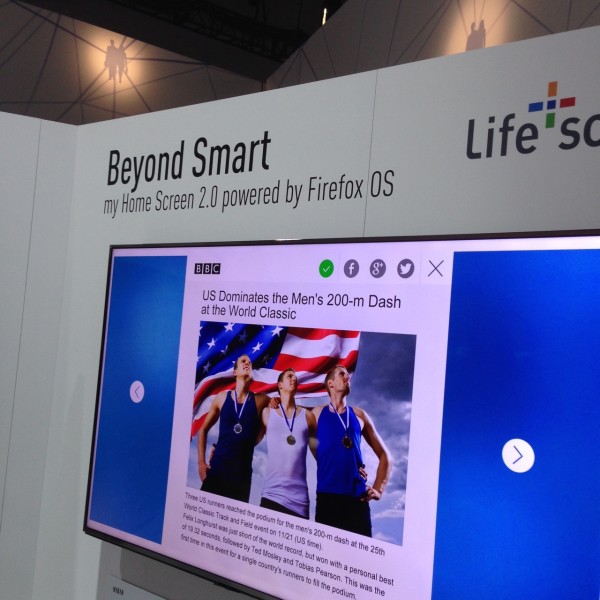 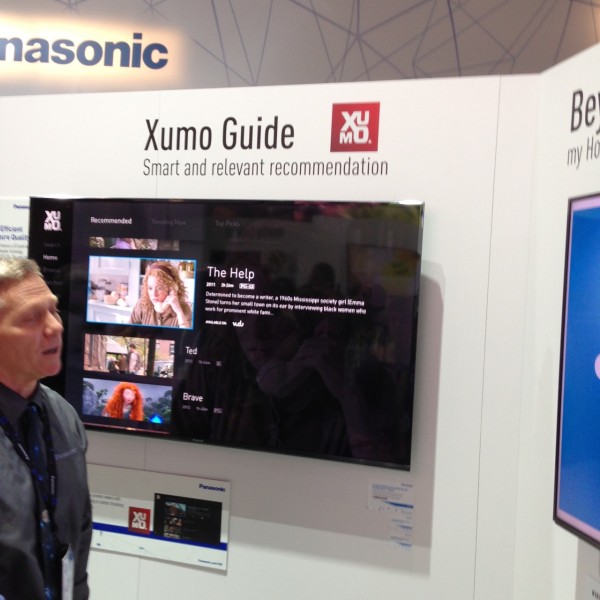 Who controls all that viewing data? Where does it live? Everyone making sure to abide by the VPPA? These new technologies just generate so many questions that aren't addressed in real time. Sure, people are probably asking from time to time, but more likely it's about the resolution and the thickness and all the other features that make things cool.

When do we see a manufacturer use privacy to make something cool? When do we see, listed among the feature sets, "and you control all the data - none of it hits our servers"? I predict it will be pretty soon. In fact, there was a handful of companies selling privacy as a product in the Personal Privacy Marketplace (see more on that in The Privacy Advisor on Monday), even if they weren't the big electronics manufacturers.

But it wouldn't surprise me if next year someone was in that privacy marketplace selling a drone umbrella, to protect you from eyes in the sky.

Can We Adapt to the Internet of Things?

The so-called “Internet of Things” is emerging and it promises to usher in profound changes that will rival the first wave of Internet innovation. As microchips and sensors are increasingly embedded into almost all the “smart devices” that we own and come into contact with, a truly “seamless web” of...
END_OF_DOCUMENT_TOKEN_TO_BE_REPLACED queue Save This

Addressing the Challenges of the Internet of Things: An EU Perspective

1
Recent news that smart fridge software was hacked to send out spam is the latest example of the ineluctable opportunities and challenges presented by the Internet of Things (IoT). The intrusiveness of IoT technologies and their potential to collect unlimited amounts of data on users’ daily habits...
END_OF_DOCUMENT_TOKEN_TO_BE_REPLACED queue Save This

Information Pollution and the Internet of Things

3
A year ago I got a new Samsung DVD player for Christmas. It’s a lovely device that I use most every day—mostly for streaming video from Netflix and Amazon. I apparently can also make Skype calls from it, though I haven’t tried — I’m told there are hundreds of other applications out there, so I’m pro...
END_OF_DOCUMENT_TOKEN_TO_BE_REPLACED queue Save This

Connected Cars are Here. The Good News Is That Privacy Is Being Taken Seriously

The big news out of this year’s Consumer Electronics Show was the wide range of autos offering connected technologies, so-called “connected cars.” This latest introduction to the Internet of Things is already reshaping the auto industry. AAA recently estimated that one in five new cars sold this yea...
END_OF_DOCUMENT_TOKEN_TO_BE_REPLACED queue Save This