Want more evidence privacy is becoming a mainstream concern? The big brands at last week’s Consumer Electronics Show in Las Vegas had their privacy messages down pat. While you might not have seen privacy as part of the in-booth marketing, the marketing and communications folks manning the booths were ready—even hoping for—privacy questions from reporters.

At least one brand, however, did, in fact, have “privacy” emblazoned across a big booth panel: 3M. The company has coined the term “visual hacking” and was pitching a suite of products to combat the loss of PII via people peeking over the shoulder of workers both in the office environment and out and about, on a plane or train, for example. 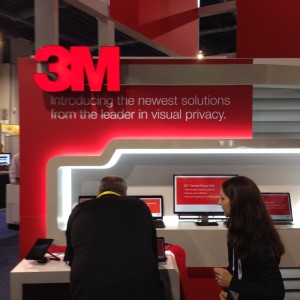 3M featured privacy prominently in its booth messaging at CES.

Offering a variety of screen protectors, even a software piece that identifies when someone is looking over your shoulder and fuzzes out your screen, 3M is even a sponsor of the Visual Privacy Advisory Council, which offers a variety of resources. The software, Conley noted, is particularly attractive for chief privacy officers (CPOs) looking to integrate visual hacking into their risk registers, as it provides a log of all the peeking eyes that came in a given day.

That understanding of how CPOs do their jobs was not unique to 3M, though. Yet another phone targeting executives and high-level government and military types was on display at CES: the Lock Phone. “We know that some phones require you to be on a certain carrier,” came the pitch from the woman passing out materials to passersby, “and your organization might have a deal with a certain carrier. We’re carrier-agnostic.” She said the chief information security officer (CISO) was the most common entry point to a company, or a CEO, but that CPOs are starting to be more frequently in the conversation.

There was even a company pitching a “private” smart watch. GoldKey’s director of investor relations, Pajet Monet, virtually hopped up and down when asked about privacy as a marketing factor: “Finally! A privacy question!”

VP of Sales Joshua Billings said the company’s calling card has always been hard tokens for AES 256-bit encryption, but now it is pitching a soft token to allow for encrypted communications from devices like the watch. He said the CISO is usually the first point of contact, or “sometimes straight from the CEO level—they don’t want to see their emails in the news.” However, “often the privacy officer will now have some say-so on that.”

The environment is ripe, he said, for privacy officers to make more persuasive cases for secure communications and data governance.

Further, Karen Sohl, director of global communications at Belkin, said privacy “comes up daily” in product and marketing discussions. “Privacy is really important to us and to our customers. We want them to know that we collect data, but we don’t share it.” 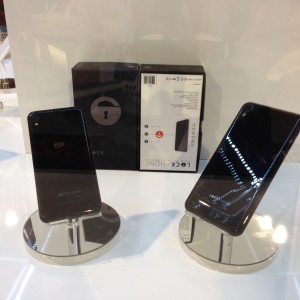 She said the company consults with a customer advisory group on privacy issues, that they practice data minimization and that privacy is “bred into our DNA.”

While privacy doesn’t feature prominently in marketing materials, “in a place like CES, it’s definitely one of the big factors” people are asking about, she said. “But it’s not at the forefront all the time.” Features come first, “but privacy is definitely a consideration.”

And this seems to be where the consumer electronics market is right now. Privacy is a factor. Brands are prepared with a message should it come up as a concern for consumers. But it’s not something you’re seeing in marketing messages alongside the size of screens or the speed of processors.

The Consumer Electronics Show organizes itself into any number of “marketplaces”: Gaming, 3D Printing, Fitness & Technology, iProducts, Unmanned Systems (drones, baby), etc.—and, for the first time this year, Personal Privacy. We take you through the booths to talk about the market opportu...
END_OF_DOCUMENT_TOKEN_TO_BE_REPLACED queue Save This

CES Recap: Attack of the Drones

I came to Las Vegas and the Consumer Electronics Show to talk privacy, but it sometimes felt a lot like talking about fuel economy at a NASCAR race: Sure, people acknowledged it was important, but WOULD YOU LOOK AT HOW FAST THOSE THINGS ARE GOING! Ultimately, CES is about cool stuff. Features. The ...
END_OF_DOCUMENT_TOKEN_TO_BE_REPLACED queue Save This

Perhaps I’ve spent too many years thinking about the privacy and security implications of emerging technologies, but as I was walking the floor at this year’s massive CES 2015 tech extravaganza, I couldn’t help but think of the heartburn that privacy professionals and advocates will face in coming y...
END_OF_DOCUMENT_TOKEN_TO_BE_REPLACED queue Save This

Miniaturization of Cameras Continues Toshiba Glass was one of the most interesting wearable technologies I demoed at this year’s CES. It is Toshiba’s rival to Google Glass and works about the same way, with a pop-up lens display offering the user an augmented reality experience. In that sense, it b...
END_OF_DOCUMENT_TOKEN_TO_BE_REPLACED queue Save This

Artificial intelligence and machine learning technologies are rapidly developing across virtually all sectors of the global economy. One nascent field is empathic technology, which, for better or worse, includes emotion detection. It is estimated that emotion-detection technology could be worth $56 ...
END_OF_DOCUMENT_TOKEN_TO_BE_REPLACED queue Save This