While many are now focused on the newly minted privacy enforcers in the U.S., such as the Consumer Financial Protection Bureau and the Federal Communications Commission, the Federal Trade Commission was never the only privacy enforcer in the United States. The Office for Civil Rights, a part of  the Department of Health and Human Services, has been on the privacy beat as well for a number of years. While its resolutions do not broadly apply to every company, since HIPAA only applies to “Covered Entities” and “Business Associates," as more companies enter the health care space, HIPAA is more of a consideration for many companies. Moreover, even if HIPAA is not applicable to your company, there are some issues, as well as best practices, that can be identified from an examination of OCR’s enforcement patterns.

There are six key points that companies should be aware of that can be drawn from public enforcement patterns.

Two terms that are important to understand in HIPAA enforcement are Resolution Agreements and Corrective Action Plans (CAPs). These two terms are part of process for managing and handling complaints, and this process is more fully explained on OCR’s website. In general, the possible outcomes of an OCR investigation are threefold: a finding of no violation; OCR obtains voluntary compliance, corrective action, or other agreement, or OCR issues a formal finding of violation. It is the latter category, at least as expressed by public Resolution Agreements, that provides interesting data points for companies to consider. 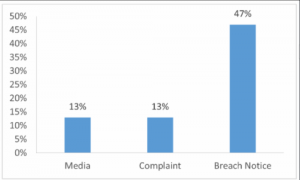 Second, it is also interesting to note the types of data that lead to enforcement: 80 percent of the cases involved electronic data, while 20 percent were paper cases. 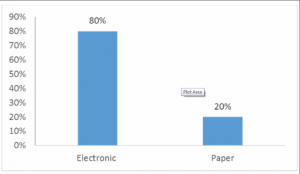 Third, the number of cases per year is important because enforcement is trending. The chart below shows this trend. While 2016 has only one case so far, it is likely that this number will increase to be more consistent with 2014 and 2015 given past experience.

Fourth, it should be noted that of the 30 Resolution Agreements, 90 percent of them had a CAP, and the one that did not presented some unique circumstances. 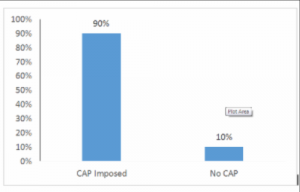 The sixth point, turning to other remedial issues, while OCR typically seeks a three-year CAP, the average length of the CAPs that were entered was two years. Also, it should be noted that the average monetary relief obtained by OCR was just under $1.1 million in these cases.

Now that privacy and security issues are front and center for many companies, OCR’s enforcement pattern is important to note and understand, since a public Resolution Agreement can result in a compliance program of two years or more and an average fine of more than $1 million.

Health data from mobile apps and other take-home tests is outside HIPAA’s jurisdiction, and as such isn’t as secure as one might think, The Washington Post reports. “Consumer-generated health information is proliferating,” with users unaware that it lives “outside of the HIPAA silo,” said the Federa...
END_OF_DOCUMENT_TOKEN_TO_BE_REPLACED queue Save This

Some healthcare providers are pleased with the U.S. Department of Health and Human Services’ nascent HIPAA Questions Portal as use of the tool grows, iMedicalApps reports. The system allows those in the field to pose questions to HIPAA experts, thus avoiding breaches of protocol. “This is a great re...
END_OF_DOCUMENT_TOKEN_TO_BE_REPLACED queue Save This

The HHS Office for Civil Rights (OCR) has fined Lahey Hospital in Massachusetts $850,000 for non-compliance with HIPAA privacy and security rules. HealthData Management reports the sanction stems from the theft of a laptop from an unlocked treatment room that contained protected health data on 599 p...
END_OF_DOCUMENT_TOKEN_TO_BE_REPLACED queue Save This

Triple-S Management Corporation, formerly known as American Health Medicare, has agreed to settle potential HIPAA violations with the U.S. Department of Health and Human Services (HHS) Office for Civil Rights (OCR), according to an HHS press release. Triple-S, an insurance company based in Puerto Ri...
END_OF_DOCUMENT_TOKEN_TO_BE_REPLACED queue Save This

The U.S. Department of Health and Human Services (HHS) has announced that University of Washington Medicine (UWM) has agreed to settle charges it “potentially violated the Health Insurance Portability and Accountability Act (HIPAA) Security Rule by failing to implement policies and procedures to pre...
END_OF_DOCUMENT_TOKEN_TO_BE_REPLACED queue Save This