It was a full room last week at the IAPP Data Protection Congress in Brussels for what may be the hottest topic in European privacy: the so-called “right to be forgotten" (RTBF).

“Today’s topic is very high on the political agenda,” said Dutch MEP Sophie in’t Veld, who was hosting the discussion as part of her Privacy Platform series, put on by the Alliance of Liberals and Democrats for Europe. “And it’s very high for everybody interested in privacy, data protection, freedom of speech, freedom of expression—but I don’t need to explain that to you.

Joining her on the panel discussion were four people intimately involved in the Costeja case that was brought before the European Court of Justice (ECJ) and triggered the “right to be forgotten” that has had Google and other search engines scrambling to operationalize the mandate to remove certain URLs from their results pages based on squishy criteria. 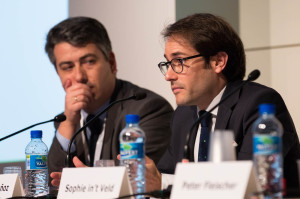 Joaquín Rodríguez: "What is said about people online can have a massive impact on their private and professional lives, but what is said is not always either correct or current."

Perhaps most intimately involved were Joaquín Rodríguez, Costeja’s lawyer, and Peter Fleischer, global privacy counsel at Google, who were at odds in front of the ECJ.

There certainly wasn’t any lingering animosity, however.

“Dude,” said Fleischer, “from one lawyer to another: Good job. You won. Congrats.”

For his part, Rodríguez was hardly celebratory. Rather, he struck a sanguine tone: “There’s been lots of talk about this, but not everyone has given it the serious thought it deserves. What is said about people online can have a massive impact on their private and professional lives, but what is said is not always either correct or current. People have a right to access their data and insure that it’s accurate.”

However, he realizes that his court victory has the potential to be abused. “The right to be forgotten cannot be used as a tool for politicians or public figures or criminals to create a customized digital persona to suit their interest,” he said. “The ruling is very clear when it says that it’s a fundamental right but not an absolute right. It must be considered alongside freedom of the press, freedom of expression, freedom of speech.”

And Fleischer and Google have certainly moved on, focusing not on the ruling but on the mandate it created and how to operationalize it. Fleischer noted that already there have been 170,000 requests to remove 475,000 different URLs from search results. The current pace is about 1,000 requests a day. He even noted that certain reputation management firms are starting to figure out how to monetize the request process.

“We have to be the adjudicator,” Fleischer said of the interesting position this puts Google in—and later, the information officer from Czech search firm Seznam.cz stood up to sympathize with the position.

Sometimes there are easy cases, Fleischer said, like a woman who has had her revealing photographs uploaded by an ex-boyfriend. Or, alternatively, an Italian politician who would rather news of his bribe-taking go away.

Other times it’s not so clear, and often Google is only working with one side of the story, as the request comes in via web format and it’s not always obvious that a person asking to have news about an old crime be removed is in fact a serial criminal and that case remains quite relevant.

Further, Google has had to make tough calls, said Fleischer, on whether to notify webmasters (they do), whether to remove results in other countries (they don't), whether to note that results have been removed on the results page itself (they do)—none of them easy calls.

Nor does everyone agree with their decisions.

Joe McNamee, executive director of European Digital Rights, made no secret of his disagreement. Why, he wondered, are the results only removed in the versions of Google with European extensions and not the .com version of Google? Why are webmasters notified that links have been removed from Google when it’s not actually that they’ve been removed, only that they don’t appear when a certain person’s name is used to search for them? Why do they provide a notification that a search result has been removed when it’s for RTBF reasons but not when it’s for copyright reasons?

But McNamee said there is an issue here that’s bigger than Google: “Intermediaries are being forced into enforcement roles.” Further, “Some delegations are concerned that freedoms of expression and access might be underweighted in the process,” but he also characterized RTBF discussions on these issues to be far less important than many other erosions of freedom online, such as with filtering of results, blocking of results for copyright reasons and surveillance.

He attributed the high level of attention be paid to RTBF to “Google’s very impressive press operation … Google has done us a gross disservice in how it’s framed this issue, and it was the moment to frame the big picture."

Fleischer deflected questions about copyright and surveillance, wanting to focus on RTBF, but he admitted that mistakes happen and emphasized the difficult position that Google is in. “I take none of these accusations of getting this wrong personally, when a thousand a day are coming in,” he said. He also agreed that RTBF does, indeed, pale in comparison to many other forms of freedom oppression, like the Russian persecution of those admitting to homosexuality online.

“And talking about Anglo-Saxon traditions of freedom of expression,” he continued, “some of the countries in that world harass journalists or lock them up in prison when they report something that is not liked by the government.” 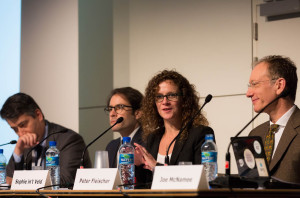 Sophie in’t Veld: "I don’t think anyone would interpret that as the right to know every detail about every person in the world."

In’t Veld reiterated that point, saying she did not feel that RTBF represented any kind of “censorship.” Yes, there was a right to know established in the Charter of Fundamental Rights, but, like privacy, that right is not absolute, she said. “I don’t think anyone would interpret that as the right to know every detail about every person in the world … Not every removal of information represents censorship. What if your teenage daughter, for example has naked pictures taken secretly and posted. You have legitimate interest in having those removed.”

“I don’t think we’ve done that here,” Colombo emphasized, “we just need to take our time to make sure we don’t. We’ll see in the future how it evolves.”

Get the Social Story of the IAPP Data Protection Congress

Click here for the Storify treatment, with all the tweets, photos and Facebook posts from the event.

DPC Billy Hawkes on the right to be forgotten

The provision within the European Commission’s draft data protection framework outlining “the right to be forgotten and to erasure” has both regulators and stakeholders asking whether it is viable. The draft framework states it would grant data subjects the right to withdraw their consent for their ...
END_OF_DOCUMENT_TOKEN_TO_BE_REPLACED queue Save This

The ripples continue from Tuesday’s European Court of Justice decision on Google and the right for individuals to have links removed to unwanted personal data indexed online. In a USA Today report, Future of Privacy Forum Cofounder Jules Polonetsky, CIPP/US, discusses the decision. “It sounds like i...
END_OF_DOCUMENT_TOKEN_TO_BE_REPLACED queue Save This

In what many are calling an historic decision, the European Union’s highest court has ruled that Google must provide users, in certain instances, with a right to delete links about themselves, including in some cases, public records. The European Court of Justice (ECJ) has said the automatic indexin...
END_OF_DOCUMENT_TOKEN_TO_BE_REPLACED queue Save This

Within the European Commission’s draft data protection framework is a provision for “the right to be forgotten and to erasure.” The provision’s concept isn’t entirely new to member states. Article 12 within the 1995 Data Protection Directive allows for the right to erasure. But where Article 12 gran...
END_OF_DOCUMENT_TOKEN_TO_BE_REPLACED queue Save This

This week the European Commission took noteworthy steps on several fronts. These are mostly procedural, but still significant for a number of reasons. Effective judicial remedy On 26 Jan., the European Commission launched an infringement procedure against Belgium for the lack of judicial remedy af...
END_OF_DOCUMENT_TOKEN_TO_BE_REPLACED queue Save This
Get the Social Story of the IAPP Data Protection Congress

Click here for the Storify treatment, with all the tweets, photos and Facebook posts from the event.