Daniel Therrien applied for the job as Canada’s federal privacy commissioner as soon as he read the news: Jennifer Stoddart would soon retire. For many in the privacy community, the government’s subsequent approval of Therrien for the role earlier this month was confusing. Most hadn’t heard of him—and he certainly wasn’t known among the privacy circuit.

But for Therrien, a softspoken man who has his staff address him however they’re comfortable—“Daniel,” if they prefer—the career move made perfect sense: He cares about people in a most basic sense.

It’s something his father, a criminologist who at the end of his career was head of the penitentiary service in Canada, instilled in him from a young age.

“The reason he became a criminologist was that he felt it was important to help others in a difficult situation, so he taught us, when we were kids, the importance of the dignity of individuals,” Therrien told The Privacy Advisor. “That’s in large part why I became a lawyer, why I became a lawyer for the government.”

While it’s exactly his job history that has some privacy advocates and legislators upset, Therrien says he’s always worked in roles that required him to protect people, which aligns nicely with his new role as the chief protector of Canadians’ privacy, he says. 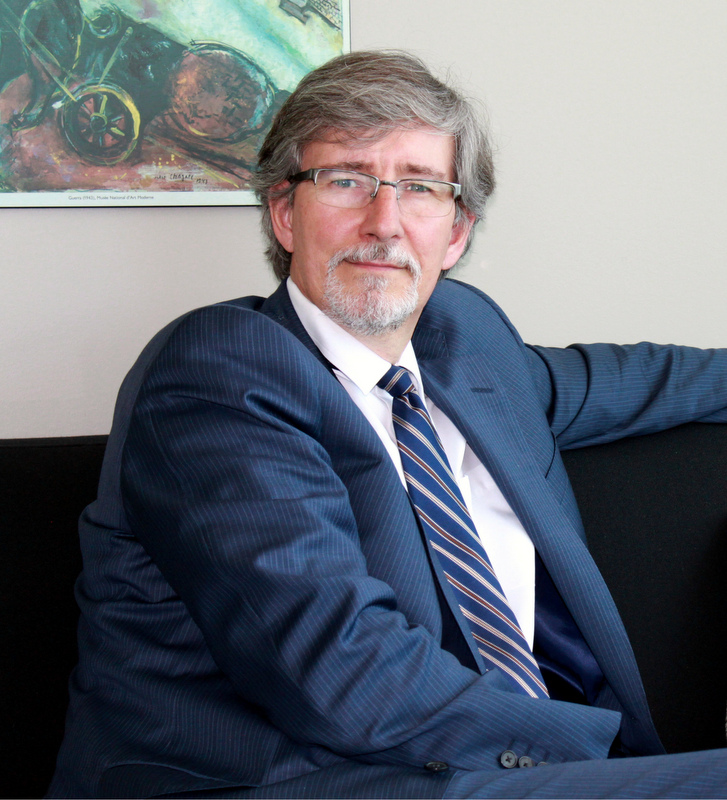 “The reason I applied I think has to do with the main theme of my career,” he said. It’s been about “human rights and the relationship between individuals and the state.”

But NDP Leader Thomas Mulclair told the Harper government, upon Therrien’s nomination, that the new privacy commissioner had neither the “neutrality nor the necessary detachment” to hold the position, while others noted his obscurity to the privacy community. The University of Ottawa’s Ian Kerr called him a “proverbial fox-in-the-hen-house.”

What had them so concerned?

Before he became Canada’s privacy commissioner, Therrien practiced law at the Department of Justice—a department in which he’s worked since he took the bar exam in 1981. While there, he worked in various capacities, including as senior general counsel and director of Citizenship and Immigration Legal Services and later, as assistant deputy minister in the Office of the Assistant Deputy Attorney General. In that capacity, Therrien co-led the team responsible for negotiating the privacy principles on data-sharing between the U.S. and Canada under the “Beyond the Border” accord.

That relationship with the government—one in which Therrien was tasked with helping it obtain and share data with a neighbor—is partly what has folks nervous. And Therrien understands that. But it’s not cause for concern, he says. Quite the opposite.

“I started my career in the corrections area—advising agencies and corrections, then immigration, over issues of protection against persecution, for instance. Then in public safety, where a lot of the focus in the time I spent as a lawyer for public safety agencies was how to get effects and learn the lessons from the actions of governments immediately in the aftermath of 9/11, which led to a commission in Canada on mistreatment in the sharing of information in states with less-than-perfect human rights records,” he said. “My career generally has been about human rights relationships between individuals and the state.”

Because of that history, he says, there seemed a natural fit between his work as a human rights champion and the position of federal privacy commissioner.

“The principles are not altogether different,” despite the fact that the “context obviously is different,” Therrien said.

The married man knows more about privacy than his adversaries may think. He lives it, in fact—in the countryside, an hour outside of Gatineau, Quebec.

Settled into the job for three weeks now, Therrien said he’s got a solid team at the privacy commissioner’s office that is helping him get up-to-speed, and his legal background serves as a strong foundation for learning the ropes on-the-go.

While some are skeptical that he’ll be able to disconnect his allegiance to the state in the name of objectively protecting Canadians’ right to a certain level of privacy from government watch, Therrien doesn’t waver in his response.

“What I’ve said to the government is my overall goal is to be a champion for the privacy rights of Canadians by improving the control people have over their personal information,” he said. “Of course, that means different things in practice in terms of the public and private sector.”

What I’ve said to the government is my overall goal is to be a champion for the privacy rights of Canadians by improving the control people have over their personal information. Of course, that means different things in practice in terms of the public and private sector.

Indeed, privacy advocates have raised questions about whether Therrien is equipped to manage the private sector, since his career has been in government. While he acknowledges that his experience in the private sector is significantly less extensive, he says his legal background makes him a quick study.

It’s a good thing he is, as one of his fairly broad goals in the long term is to look at the risks new technologies pose to both the government and the private sector.

In that regard, Therrien said one of his priorities is ensuring that Canadian consumers have a sense of power over their own information.

“One of the main issues is ensuring that the consent given by consumers to the collection, use and harvesting of information by service providers is truly informed and valid,” he said, adding that his ears are perked to the chorus of complaints that flood the privacy commissioner’s office over private companies’ privacy policies—either not being obvious on the their websites or not transparent enough.

“That leads to some level of mistrust, and electronic commerce depends on trust to flourish,” he said.

During his confirmation hearings in Parliament earlier this year, Therrien undertook the responsibility to establish and foster relationships with civil society and the private sector.

“My style of management is to be very inclusive, and I intend to use that style here,” he said. “To hear people out to try to represent what they have to say in the way we function. I’d rather do things in the correct way than too rapidly.”

A call is planned with his counterparts, the provincial privacy commissioners, in early July.

As for the public sector, government surveillance is certainly on the radar. Therrien has already testified before the House of Commons Justice Committee in his capacity as privacy commissioner, urging the government to split Bill B-13—the government’s cyberbullying bill—in light of a recent Supreme Court ruling requiring warrants to access telecom subscriber information.

On Bill C-13, Therrien says he believes the government has very legitimate objectives in terms of protecting the public interest and public safety, and, likewise, Canadians do want their privacy protected.

“My role as commissioner is that this is not done at all costs and the privacy rights for ordinary Canadians who should have nothing to fear from government are not reduced to government institutes,” he said.

Time will tell whether Therrien will carry the torch lit by his predecessor, Stoddart, in making a name for himself on the international stage. Stoddart made headlines for taking on big companies like Google and Facebook in defense of Canada’s privacy laws. But what is certain is Therrien’s plan to prioritize Canada’s relationship with global regulators.

“I’ve seen the impact of these relationships with other regulators in other countries,” he said.

Just days after NDP Leader Tom Mulcair hammered Prime Minister Stephen Harper over his nomination of Justice Department lawyer Daniel Therrien to take over as federal privacy commissioner, The Globe and Mail reports that the House of Commons voted 153 to 75 to approve Therri...
END_OF_DOCUMENT_TOKEN_TO_BE_REPLACED queue Save This

Testifying before the House of Commons Justice Committee on Tuesday, Privacy Commissioner Daniel Therrien urged the government to split Bill C-13 “to allow for thorough examination of several measures that would expand online monitoring,” Ottawa Citizen reports. Bill C-13 would make it i...
END_OF_DOCUMENT_TOKEN_TO_BE_REPLACED queue Save This

Harper Pick for Privacy Commissioner “May Not Be the Best Fit”

A new poll by Forum Research indicates most Canadians oppose Bill C-13, “at least when asked about elements of Bill C-13 that have nothing to do with cyberbullying,” The Huffington Post Canada reports. The survey, which was conducted earlier this month, included 1,433 respondents. Of tho...
END_OF_DOCUMENT_TOKEN_TO_BE_REPLACED queue Save This

The Edward Snowden revelations on the alleged span and scope of U.S. electronic surveillance programs exposed similar activities in other countries operating under the auspices of law enforcement and national security. Canada, like many of these countries, must answer a fundamental question: How doe...
END_OF_DOCUMENT_TOKEN_TO_BE_REPLACED queue Save This