Anyone familiar with the European data protection and privacy landscape likely understands why the shift from the European Data Protection Supervisor (EDPS) of the last 10 years to his successor is sort of a “moment.”

After all, EDPS Peter Hustinx, the man who cultivated the then newly established role, was kind of a managerial rock star by most accounts; the rhetoric around data protection and privacy have hit a fever pitch in European Parliament sessions and boardrooms alike, and the data protection regulation is soon to be finalized, meaning widespread changes that will have data protection authorities looking to the top of the ladder for guidance on how to regulate.

Enter Giovanni Buttarelli, a tall, distinguished-looking man from Italy who’s leaving his desk as assistant supervisor to Hustinx for the last six years to become EDPS. Buttarelli was one of the shortlisted candidates who applied for Hustinx’s job in the first round of the very drawn-out process of selecting the next EDPS last January, a process Christopher Kuner criticized for its lack of transparency and potential conflicts of interest.

Alhough the government hasn’t explained what changed from round one to the next, Buttarelli was deemed adequate this time, and fellow EDPS candidate Wojciech Rafał Wiewiórowski, Poland’s former inspector general for the protection of personal data, will be the assistant supervisor. 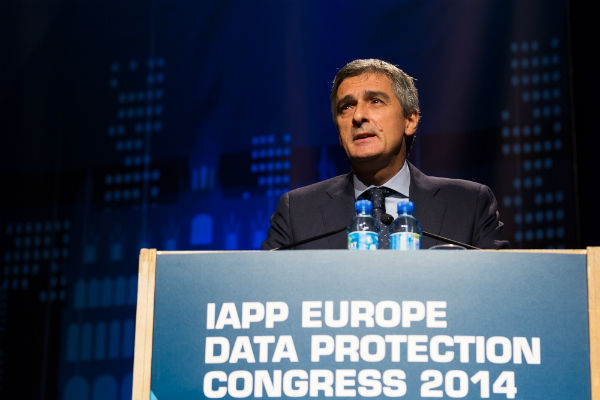 But isn’t Buttarelli intimidated? Not only is he replacing a man who’s been repeatedly revered for wearing some pretty big shoes, but the entire data protection community is looking to him now. The pressure!

Buttarelli, who sat down with us at the IAPP’s recent Data Protection Congress in Brussels—coincidentally on the day he was initially supposed to be confirmed, until the vote was delayed—said he’s not nervous.

This is Europe’s moment, he said.

“The main challenges are around the data protection reform,” Buttarelli said. “It’s a window of opportunity to have modern rules harmonizing member states’ provisions and relevant for the rest of the world.”

Buttarelli said he plans to make an announcement highlighting his strategic plan for the next five years, which includes a mandate to increase transparency and accountability for the independent institution he now leads. He said he hopes to be evaluated at the end of his term “on the basis of key performance indicators and clear objectives.”

Part of Hustinx’s legacy, according to those who worked closely with him, was his ability to work a room—even if that room was filled with opposing factions.

Buttarelli said while he understands there is an increasing expectation that the EDPS will be an influential voice on data protection around the world, his voice won’t be the only one heard in the room. He said he plans to be an inclusive and dynamic leader.

“I already pay and continue to pay tribute to Peter, the founder of the institution. Together we have transformed a small body into a large EU institution; therefore, it’s a mix of continuity and evolution,” he said, adding he’s aware of the expectations. “EU institutions clearly highlighted, even in the vacancy notice, the strong need to have an important center of gravity."

While he might sit at the center, there are others who will sit at the table.

"National data protection authorities (DPAs) are to be encouraged to better cooperate,” he said. “We would like to help them better interact. We are one reliable DPA, not necessarily the one on top of everybody.”

His focus is certainly in part on EU-U.S. relations, he said, adding he’s especially concerned about police and judicial cooperation, the ongoing negotiations on the Transatlantic Trade and Investment Partnership and on passenger name records. On Safe Harbor, he fully supports the European Commission’s decision that the U.S. must show significant improvements on the agreement within the next six months.

“It’s time to make this agreement more efficient in practice,” he said.

In evaluating existing transatlantic agreements, “It will be essential to evaluate data collection and sharing principles like necessity and proportionality,” he said.

Big data is also of particular concern. The kind of safeguards legally obligated under the Lisbon Treaty to protect Europeans’ fundamental rights must be upheld, Buttarelli said, particularly in the face of new technologies. It will be necessary to find the right balance, however, between rules that have adequate detail without being too prescriptive.

The rules must be “detailed enough to prevent an inconsistent, divergent approach,” he said, adding if the rules are too detailed, they’ll become obsolete within just a few years.

“It’s an historical moment for data protection,” he said. “Europe is going to adopt rules which will remain into force until 2030. We need to be future-oriented and also think in terms of long-term approaches.”

Asked whether there are aspects of the proposed regulation that particularly concern him as someone who’ll be required to enforce its provisions, he said, “Not yet.”

In fact, for one, he’s generally a fan of the one-stop-shop mechanism, he said.

“The devil is in the details,” he said, adding that he likes the idea that the EDPS would serve as the secretariat to the future European Data Protection Board (EDPB), an advisory board that would sit within the Article 29 Working Party.

Buttarelli feels heading up the board will help facilitate enforcement consistency in crossborder cases. “I think we could better help colleagues to better interact bilaterally without necessarily involving all, with a view to involve the plenary 28 DPAs only when this is really indispensable,” he said.

As for immediate plans in the works, the EDPS is involved in the Privacy Bridges project, roundtable discussions between independent privacy experts that aim to find a framework of practical options for interoperability between the EU and U.S., with a paper expected to be presented at the 2015 International Conference of Data Protection and Privacy Commissioners.

Additionally, the EDPS is hiring. The office is hiring 15 staffers, in fact. Many of them will work on the challenges around creating the EDPB once the regulation is finalized.

In the end, Buttarelli is feeling good. But that doesn’t mean he isn’t feeling the pressure.

“It’s a unique moment not only for data protection but for the EDPS as well, and all signals seem to be positively convergent,” he said, adding that "there are no excuses for failures. And this explains how I can see a challenge and at the same time an honor to perform this entirely new task, which I consider as a crowning achievement.”

Current EDPS Assistant Supervisor Giovanni Buttarelli today moved a step closer to acquiring the lead European Data Protection Supervisor role being vacated by Peter Hustinx. The EU Parliament’s LIBE Committee announced the results of its vote on the shortlist provided by the European Commission, wi...
END_OF_DOCUMENT_TOKEN_TO_BE_REPLACED queue Save This

European Data Protection Supervisor (EDPS) Peter Hustinx’s second five-year term ends this month, and a new leader will soon be appointed. It is worth taking time to note that those who live and breathe European data protection nearly universally agree Hustinx leaves behind both a sterling reputatio...
END_OF_DOCUMENT_TOKEN_TO_BE_REPLACED queue Save This

Why Isn't Peter Hustinx on a Beach in New Zealand by Now?

In January, European Data Protection Supervisor (EDPS) Peter Hustinx and his staff celebrated the EDPS’ 10th year as an institution. Hustinx had all but blown out the candles on his proverbial “Bon Voyage” cake when the European Commission said, “Not so fast.” Though his two-term run had expired, th...
END_OF_DOCUMENT_TOKEN_TO_BE_REPLACED queue Save This

Council's De Matteis: The Regulation Is Coming Along Nicely

Luca De Matteis, justice counselor, permanent representative of Italy to the EU, stopped by the IAPP’s Data Protection Congress to set the record straight: While the Council of the EU has been accused of taking its time or even purposefully dragging its feet to create its draft of the data protectio...
END_OF_DOCUMENT_TOKEN_TO_BE_REPLACED queue Save This