Those of you in the U.S. or UK might be familiar with this phrase: “Survey says!” Alternately Family Feud or Family Fortunes, depending on your geography, the famous quiz show surveyed 100 people on a variety of questions and then challenged families to identify the top responses.

The first team guessed “Excessive access to data,” but unfortunately got the buzzer. Sorry, that didn’t make the top six.

The second team then won control of the board by guessing, “Data transfer.” Indeed, six of the 20 companies audited were transferring data without the appropriate permissions in place. They scored more points by guessing “lack of training.” Twelve of the companies audited did not have comprehensive privacy training programs in place. 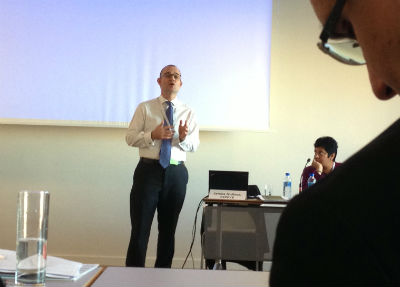 “You need to look at where your training is housed,” said Mullock. “What will employees be most receptive to? Is it one-to-one, is it PC-based or is it just data PR? Training for the sake of public relations?”

Team two picked up a strike after that by guessing that there were inadequate data breach plans in place, then another by guessing the data destruction plans were inappropriate.

However, they rallied by guessing vendor contracts are often not in place. Nine firms audited either had no vendor contracts at all or had contracts that didn’t properly address all the issues necessary to satisfy the regulators in the countries in which they did business.

They picked up a fourth correct answer by guessing that notice and consent are often not properly posted and acquired. Five of the audited companies came up short there, despite what would seem to be a universal understanding that customers need to be told what is being done with their data.

“Your privacy notice is your CV to the outside world,” said Ulrich Baumgartner, another Osborne Clark partner. “If the policy is not adequate, that’s the first sign that something might be wrong, and that’s something that regulators will notice most.” 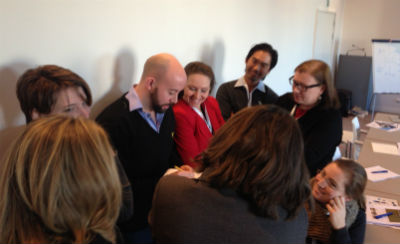 Team 2 huddles up to decide on their guesses for the most common privacy audit failures, at the IAPP's Data Protection Congress 2013.

Funnily enough, neither team could come up with the most common failure Osborne Clark found in its audits: Sixteen of 20 firms failed with their basic privacy policy, governing internal company operations. Whether it was different policies between different divisions within the firm or lack of updates to the policy for practices including BYOD and telecommuting, very few internal policies were up to date, said Mullock.

“Another big problem,” he said, “were policies that hadn’t been actually consented to by staff. When it came to the crunch, the company couldn’t prove that it had done the training and gotten the consent that it said it had done.”

Finally, neither team could grab the last of the top six, either, which was lack of proper registration with the DPAs in the countries in which they were doing business. Half of the firms audited failed this.

So, to summarize, the top failures of privacy audits conducted by Osborne Clarke are:

Look for more coverage this week from the IAPP Europe Data Protection Congress, being held in Brussels, Belgium.

Nearly five years after the implementation of the EU General Data Protection Regulation, Europe is immersed in a digital market strategy that is giving rise to a host of new, interconnected regulation. Among this complexity resides the proposed Artificial Intelligence Act. Originally presented by th...
END_OF_DOCUMENT_TOKEN_TO_BE_REPLACED queue Save This

While a final resolution is near, there's been more wait-and-see periods than action during negotiations for the EU-U.S. Data Privacy Framework. First it was months of waiting in between the provisional EU-U.S. agreement on data transfers and the executive order securing U.S. national security comm...
END_OF_DOCUMENT_TOKEN_TO_BE_REPLACED queue Save This

Data retention has long been a blind spot of Europe's otherwise strict data protection regime. But a possible practical solution might be in sight. The European Union has a long history of asking the same question several times until the answer is the desired one. For example, in the 2000s, Ireland...
END_OF_DOCUMENT_TOKEN_TO_BE_REPLACED queue Save This

A recent statement from Italy’s data protection authority, the Garante, opens a new chapter in the never-ending story of profiling cookies. In order to understand the weight of the Garante's words, we must look back to June 10, 2021, when the DPA issued a new set of cookie guidelines and changed th...
END_OF_DOCUMENT_TOKEN_TO_BE_REPLACED queue Save This

Scuba diving might not be the first thing that comes to mind when privacy professionals think of an incident response plan. But there are parallels and Melanie Ensign, an avid diver certified in rescue and prevention, draws on them in her work in both areas. “I bring a lot of the concepts that I le...
END_OF_DOCUMENT_TOKEN_TO_BE_REPLACED queue Save This