The Japanese Consumer Affairs Agency (CAA) has awarded Christopher Kuner its "Best Consumer Supporter" award. At a ceremony June 26, Kuner was awarded a medal for "services to Japanese consumers," according to the CAA's Takeshi Okano.

Japanese Ambassador to the European Union, His Excellency Keiichi Katakami, hosted the event. Kuner, an attorney at Wilson Sonsini Goodrich & Rosati, said he had been meeting with various ministries in Tokyo last year to answer questions on EU data protection law, current and future. Japan is in the midst of reforming its privacy law and is looking at the EU for guidance, Kuner said.

A statement by the CAA, issued in Japanese but translated for The Privacy Advisor by Okano, says the CAA highly appreciates the fact that Kuner has provided "useful information on European personal data protection for Japanese consumers through his activities as an attorney and an expert." Kuner's expert advice "made substantial contributions to the advancement of the knowledge of Japanese consumers on European personal data protection." 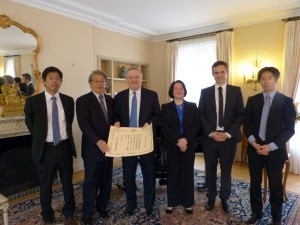 At a ceremony June 26, Chris Kuner was awarded a medal from the Japanese government for "services to Japanese consumers

Kuner said many of the government's questions revolved around things like data transfers and the status of the data protection authorities.

"It shows the influence of EU law," Kuner said, adding, "It is a great honour to receive this award. I am pleased that my contributions regarding EU data protection law have been valuable to the Japanese Consumer Affairs Agency and the Japanese consumer."

On Nov. 1, 2021, China’s Personal Information Protection Law took effect and became the first Chinese law dedicated to protecting the personal information rights of individuals. However, due to a lack of implementation regulations and clarity, many companies face a situation where they are unsure ho...
END_OF_DOCUMENT_TOKEN_TO_BE_REPLACED queue Save This

A lack of implementation regulations and general clarity around China’s Personal Information Protection Law is creating potential compliance burdens. This is especially true with understanding conditions for cross-border data transfers under Article 38 of the PIPL. AnJie Law Firm's Samuel Yang, Chri...
END_OF_DOCUMENT_TOKEN_TO_BE_REPLACED queue Save This

The Baden-Württemberg Commissioner for Data Protection and Freedom of Information released a dissenting opinion over a recent decision on data transfers by the Baden-Württemberg Public Procurement Chamber. The LfDI questioned the court's decision regarding insufficient supplementary measures to exec...
END_OF_DOCUMENT_TOKEN_TO_BE_REPLACED queue Save This

In this week’s global legislative roundup, the U.S. Federal Trade Commission announced it will explore privacy and data security rulemaking. Updates to Russia’s personal data law will be formally implemented next month. The Irish Data Protection Commission’s children's privacy decision against Insta...
END_OF_DOCUMENT_TOKEN_TO_BE_REPLACED queue Save This

The European Parliament called for updating the EU Consumer Credits Directive, which would partially entail regulating artificial intelligence-based loan decision-making. MEPs said with “non-banks,” like crowd-sourcing loan applications having entered the loan market, it has made it easier for peopl...
END_OF_DOCUMENT_TOKEN_TO_BE_REPLACED queue Save This