For those unfamiliar, let it be said that the Consumer Electronics Show in Las Vegas is truly massive. The exhibits fill the entire Las Vegas Convention Center, plus a good portion of the Sands Convention Center. More than 100,000 people are underfoot. 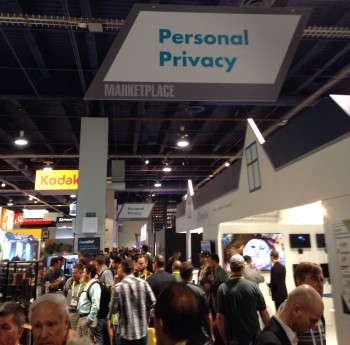 The Privacy Marketplace was hopping on Thursday at CES.

Tucked a bit away in the back half of the South Hall of the Las Vegas Convention Center, it was fairly quaint, with just a handful of companies willing to be trailblazers, but it was nevertheless busy.

“It was totally worth it,” said Aaron Zar, of his company’s decision to buy space in the marketplace. As founder and CEO of Silent Pocket, he was busy manning a 10’ by 10’ booth stocked with elegant-looking leather wallets, phone- and tablet-holders, designed to thwart RFID scanning and shield devices from cellular and GPS networks.

He said he does about 60 percent of his business through retail wholesalers, the rest in direct sales to the enterprise. Silent Pocket hopes to launch a Kickstarter project for its next line of leather accessories in the next couple months.

While he could have set up shop in a section with other case and holder manufacturers, he said being in the Privacy Marketplace had real value. “The fact that they opened up a new section for us,” he said, “that just shows you the whole industry is becoming aware of privacy as an issue. The honeymoon phase is over. Consumers want to be more careful with their data.”

Jack Chadsey, CEO of iWallet, a maker of hard wallet and passport cases that are sealed via thumbprint and tethered to your phone, agreed. As former CEO of Sunglass Hut and other retail ventures, he’s not a “privacy guy.” Rather, he saw a market opportunity and launched a product to take advantage of it. “We wanted to be here in the Privacy Marketplace,” he said, “and it’s not a bad location.”

Looking to capitalize on both the high-end retail market and B2B sales to executives in sensitive verticals like healthcare, finance and education, iWallet will soon expand, Chadsey said, with a line of purses for women and other everyday items that can be modified for privacy. He calls them “secure luxury techcessories.”

Vysk CEO Victor Cocchia joined the chorus: “Privacy is a hot issue right now. It’s on everyone’s radar,” he said. As a maker of cell phone cases that allow people to convert their standard smartphones into encrypted devices on the fly, he emphasized, “we’re a privacy company, not a case company. This is a great place for us in the marketplace.” 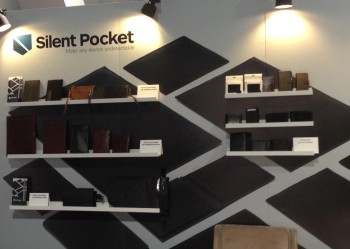 What's in your wallet? These guys make sure no one will ever know.

He’s also selling into two distinct customer bases, retail and B2B, with a consumer play that’s at a lower price point and offers integration with apps that encrypt texts and photos at the device level, and an executive or higher-end offering that involves a case with its own processor and battery to take all data and encrypt it at the hardware level without need for an app.

Even the traditionally B2B space of VPN services has seen a surge of consumer interest, said Joseph Craig, marketing specialist for Private Internet Access, which occupied the most real estate in the Privacy Marketplace. “We’re seeing a huge boom with all the Targets and Home Depots of the world,” he said.

PIA offers VPN service for $3.33 a month, with servers in 13 countries to reduce latency and an emphasis that they don’t log any customer data whatsoever. “We have no info on you,” he said, as part of a practiced pitch.

“It’s funny,” he said of a newly developing mindset placing a premium on personal data. “I pay $50 a month for ADT service to protect my material possessions, but before I started working here, I never would have thought to pay a small amount to protect my virtual possessions and data. Now I’d never think of using a Starbucks WiFi.”

In fact, the most common question they get is, “Is this legal?”

“We get that all the time,” he said. “We just want to give people the right to surf anonymously, to keep their constitutional right to privacy.”

Consumers asking about privacy—that was the big takeaway. These companies in the privacy marketplace, in large part, aren't advocates. They're entrepreneurs looking to capitalize on market opportunity. They expect a larger privacy marketplace next year and for more brands to incorporate "privacy" into their marketing.

"Anyone, everyone, can understand the need for privacy," said Cocchia.

CES Recap: Attack of the Drones

I came to Las Vegas and the Consumer Electronics Show to talk privacy, but it sometimes felt a lot like talking about fuel economy at a NASCAR race: Sure, people acknowledged it was important, but WOULD YOU LOOK AT HOW FAST THOSE THINGS ARE GOING! Ultimately, CES is about cool stuff. Features. The ...
END_OF_DOCUMENT_TOKEN_TO_BE_REPLACED queue Save This

Have the NSA Leaks Just Helped the PETs Industry?

Okay, at this point, we all know about the NSA leaks—if not, where have you been?!? But, did you know it was the best traffic week to-date for anonymous search site DuckDuckGo? According to this VentureBeatpost, direct searches on the search site were up 26 percent on Wednesday alone. DuckDuck...
END_OF_DOCUMENT_TOKEN_TO_BE_REPLACED queue Save This

The High Court of Kenya halted the launch of the country's identification system, the Huduma Namba, over violations of the Data Protection Act, Nairobi News reports. The government planned its ID card rollout before performing a required impact assessment under the DPA. The Huduma Namba system combi...
END_OF_DOCUMENT_TOKEN_TO_BE_REPLACED queue Save This

According to a blog post from Goodwin Procter, the U.S. Securities and Exchange Commission recently closed a public consultation on digital engagement practices by broker-dealers and investment advisers. So-called "dark patterns" were among the topics the SEC sought comments on while it also request...
END_OF_DOCUMENT_TOKEN_TO_BE_REPLACED queue Save This