At this point, “Privacy by Design” is as close to privacy dogma as you’re going to get. Regulatory bodies across the globe now provide this idea, developed by Ontario Information and Privacy Commissioner Ann Cavoukian, as guidance for all technology companies that hope to gather personal information.

The argument is perhaps a priori: If we accept that privacy is either a constitutional right, in the U.S. for example, or a human right, as it’s put forward in the EU most notably, then those who are designing technology ought to consider privacy as part and parcel of their product design. Just as they would take measures not to discriminate on the basis of race or gender, for example, so should they take measures not to violate their customers’ privacy.

But what of the concept of “privacy by default”? The idea is expressed in Article 23 of the proposed EU Data Protection Regulation, for example, that “the (data) controller shall implement mechanisms for ensuring that, by default, only those personal data are processed which are necessary for each specific purpose of the processing and are especially not collected or retained beyond the minimum necessary for those purposes, both in terms of the amount of the data and the time of their storage. In particular, those mechanisms shall ensure that by default personal data are not made accessible to an indefinite number of individuals.”

Is that to be interpreted that absolutely zero data ought to be collected from individuals without their express consent?

Such was the most contentious issue at last week’s International Conference of Data Protection and Privacy Commissioners in Warsaw, Poland.

It was raised initially by former Data Protection Ombudsman of Finland Reijo Aarnio as part of the closing plenary discussion, focusing on “Actors: perspectives, roles, interests.”

“In the good old days,” he said, “there was controller, processor and subject. Now there are so many other players … now we have ‘appification.’ We know for example that the average EU person has 37 apps on the device in their pocket. Now panelists, please help me out. I can’t figure out the following: Our current regulation is technology-neutral. Now we hear calls for changing your privacy settings, and in Article 23 we have privacy by default. So, does the responsibility for this privacy by default belong to the developer? The publisher? The distributor? Who is in charge of privacy by default?” 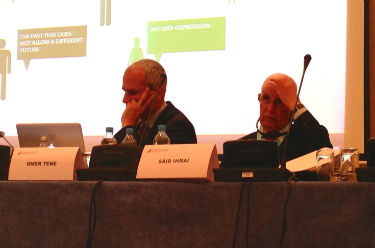 IAPP VP of Research and Education Omer Tene took the first swing at answering. “We hear all the time, ‘If you’re not paying, you’re the product.’ But that’s an overstatement. I don’t feel that I’m the product. I’m a user and a consumer and usually a very content one. Otherwise, I don’t have to use the product.”

While acknowledging the need for education, he also said, “I don’t think privacy by default is necessarily right for mobile apps. It should be the amount of privacy we expect for the service we are getting.”

Jacob Kohnstamm, chairman of the Dutch DPA and the Article 29 Working Party and chairman of the Executive Committee of the International Conference of Data Protection and Privacy Commissioners, disagreed. “Privacy by default is the only way for apps to provide an opportunity for explicit consent,” he said. “The consumer must choose to share.”

Tene replied by pointing to his phone. “If my driving app doesn’t have access to location data, it’s useless,” he said. “My messaging app, of course I expect it to have access to my contacts.”

Must every app really ask explicitly for access to every piece of personal data?

Kohnstamm was supported from the crowd by Cavoukian, who pronounced herself “troubled” by some of Tene’s arguments. She wondered why it would be so difficult for apps such as these to provide a simple message at first use that says, “by the way, this app requires the use of your location data.”

Should the European regulation pass with this language, will apps need to ask for permission to access every single piece of personal data, such as Cavoukian suggests? Or will regulators see things Tene’s way, allowing apps to collect that data that seems obviously necessary for the service being provided? And who will be held responsible if data use goes awry? This interpretation of “privacy by default” may be the big post-regulation issue—should the regulation come into being.

August was shaping up to be the month U.S. privacy professionals might catch their breath while fluid discussions around the proposed American Data Privacy and Protection Act pause during U.S. Congress' summer recess. But now the U.S. Federal Trade Commission has everyone holding their breath once a...
END_OF_DOCUMENT_TOKEN_TO_BE_REPLACED queue Save This

The proposed American Data Privacy and Protection Act feels so close and yet so far away. The comprehensive privacy bill is on the cusp of a U.S. House floor vote, a first for any federal privacy proposal. But the bill's fragile nature is being tested at a crucial point in the legislative process as...
END_OF_DOCUMENT_TOKEN_TO_BE_REPLACED queue Save This