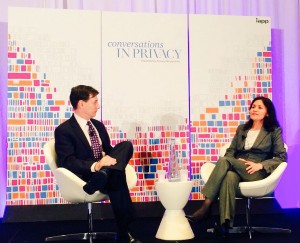 At issue is a recent and historic order by the FCC to reclassify broadband providers as public utilities, which effectively removes that entire Internet service provider (ISP) industry segment from the FTC’s enforcement authority. The FTC has enforcement authority over the entire consumer marketplace with the exception of “common carriers” or companies treated like public utilities.

“We welcome the FCC’s interest in privacy,” explained FTC Bureau of Consumer Protection Director Jessica Rich in a conversation with IAPP VP of Research and Education Omer Tene. “There’s a lot going on in this area and a long history of cooperation with them ... They have done things fairly consistently with what we do in privacy.”

However, Rich said, the FTC is concerned about its jurisdiction over broadband providers, noting the commission would “like a repeal of the common carrier exemption.”

“I do feel that the exemption is a provision that is antiquated," Ramirez said. "I’m personally urging Congress and the FTC to move to eliminate the common carrier exemption so we can apply consistent standards across the board.”

During another session with a panel of global data protection authorities, FCC Director of Enforcement Travis LeBlanc said his agency is actively engaged with consumer protection in relation to privacy and that it’s eager to work with a large swath of enforcement agencies. Noting that the FCC recently joined the Global Privacy Enforcement Network, LeBlanc said there will be more cooperation between the FCC and the FTC as well as with the Consumer Financial Protection Bureau and state attorneys general. 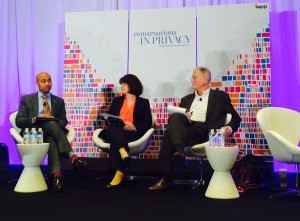 Sitting next to LeBlanc, FTC Commissioner Maureen Ohlhausen once again expressed concern that the common carrier exemption puts the FTC’s enforcement authority in this space at risk. Yet, in boasting about his agency’s authority, LeBlanc explained that the FCC actually has rule-making authority, an authority long sought after by the FTC.

In a National Journal report, New America Foundation’s Open Technology Institute Senior Policy Advisor Laura Moy agreed with LeBlanc, saying the switch in authority could mean stronger privacy protections for consumers and noting the FCC possesses “some of the strongest federal privacy protections that we have on the books.”

She continued, “Usually companies are in the clear under the FTC’s authority if they just have a clear privacy policy and they abide by it … The FCC can actually set baseline standards for what practices are ok and what practices are not.”

Some are concerned the FCC could move to expand its regulatory authority on consumer privacy too much. TechFreedom Executive Director Berin Szoka predicted in the National Journal piece that the FCC will soon attempt to regulate beyond ISPs all the way down to actual websites. He also said the move will produce “years of uncertainty” for companies “and litigation.”

Fearful predictions aside, however, the turf battle between the federal agencies may not come to much. Yesterday, former advisor to Chairwoman Ramirez and current PerkinsCoie Partner Janis Kestenbaum tweeted, “The press loves a sibling fight but not sure ground for a real turf battle here. How many FTC cases against ISPs?”

For an answer to that, you might want to search the FTC Casebook. A quick interrogation doesn't find any of the major carriers, but we might have to get into a discussion of how "Internet service provider" is defined to fully answer Kestenbaum's question.

But the larger question remains: Will the FTC get back its power to regulate ISPs, or will it remain the exclusive domain of the FCC?

Does the FCC Have FTC Envy?

It’s been a busy week for the U.S. Federal Communications Commission (FCC). On Monday, the FCC announced its largest enforcement action to date by hitting TerraCom and its affiliate YourTel America with a $10 million fine for poor data security practices. That’s not chump change. Plus, the previous...
END_OF_DOCUMENT_TOKEN_TO_BE_REPLACED queue Save This

Several high-ranking officials from the Federal Trade Commission (FTC) shared their views and concerns on recent developments in the privacy space Thursday at the IAPP Global Privacy Summit. Additionally, the FTC plans to launch a campaign to provide businesses with guidance on data security and wil...
END_OF_DOCUMENT_TOKEN_TO_BE_REPLACED queue Save This

Thursday’s ruling by the Federal Communications Commission (FCC) could also have implications for online privacy. The New York Times reports that FCC’s order “includes provisions to protect consumer privacy.” According to the Los Angeles Times, the ruling could be a “game-changer” because it would r...
END_OF_DOCUMENT_TOKEN_TO_BE_REPLACED queue Save This

In this week’s global legislative roundup, India’s Minister of State for Electronics and Information Technology gave an update on the redrafted Personal Data Protection Bill. The EU Parliament’s Committee on Civil Liberties, Justice and Home Affairs pushed for a review of the Irish Data Protection C...
END_OF_DOCUMENT_TOKEN_TO_BE_REPLACED queue Save This