It was clear almost immediately here in Warsaw for the 35th Annual Conference of Data Protection and Privacy Commissioners that the collected DPAs intended to show a united front and that they mean business. As part of his keynote speech kicking off the open part of the conference, Polish Minister of Administration and Digitization Michel Boni said, “We need regulations. Hard regulations. In Europe, we have a discussion pending—we have to make sure it is a strong law to harmonize the laws of all the states rather than a directive.”

This sentiment was echoed by Jacob Kohnstamm, chairman of the executive committee of the International Conference of Data Protection and Privacy Commissioners. “Even more than before,” he said later in the day, “we stand ready to work together to tackle contraventions with our respective legislation and ensure the best possible protection of our citizens. The only way to maintain a high level of protection is for data protection authorities to cooperate closely. We will actively work together in selecting targets for cross-border investigations … If companies break our laws, they should be ready to deal with an international and cooperative response.” 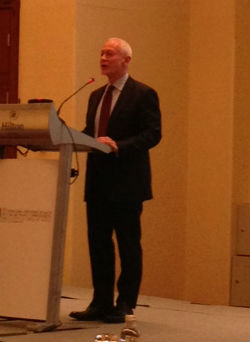 It should not be surprising, then, that one of the resolutions to come out of the conference’s closed session is “to further encourage efforts to bring about more effective coordination of cross-border investigation and enforcement.” Perhaps the most practical part of the resolution is a mandate for the International Enforcement Coordination Group to develop a common approach to cross-border case handling and enforcement coordination, hopefully to be adopted at next year’s conference.

However, that major resolution is just one of nine the collected DPAs have issued today, the most resolutions to ever come out of the conference in a single year.

In light of the worldwide response to whistleblower Edward Snowden’s revelations about U.S. surveillance and data-collection efforts, it should perhaps also not be surprising that the National Security Agency’s (NSA) activities were top of mind as well at the conference. Kohnstamm cited Snowden as a key impetus behind the resolution, calling for “anchoring data protection and privacy protection in international law.”

The resolution calls upon governments to “advocate the adoption of an additional protocol to Article 17 of the (UN’s) International Covenant on Civil and Political Rights, which should be based on the standards that have been developed and endorsed by the International Conference and the provisions in General Comment No. 16 to the Covenant in order to create globally applicable standards for data protection and the protection of privacy in accordance with the rule of law.”

Notably, the U.S. Federal Trade Commission abstained from voting on this resolution.

It was clear that many worldwide DPAs are truly upset about what they’ve learned from Edward Snowden and the journalists who’ve worked to report what he knows.

“Let me be clear,” said Kohnstamm, “when it comes to surveillance, the non-Americans do not like to be discriminated against. The statement from Barack Obama, ‘Do not worry, we’re not surveilling American citizens,’ was not very well received in the rest of the world.”

“I have to say,” Poland’s Boni echoed, “that (the NSA’s) activities are unacceptable from the point of view of protecting civil freedoms. Safety cannot be achieved by violating the feeling of freedom.”

However, the declaration on which Kohnstamm placed the most emphasis, and the one at the top of the list released by the conference, involves what the DPAs have termed the “appification” of society.

Noting that there are now some six million mobile applications available, with another 30,000 currently being released every day, Kohnstamm said, “we should be careful with the amount of personal data they collect. It is essential that users are and will remain in charge of their own data. They should be able to decide what information to share with whom and for what purposes, and they should not be surprised by hidden features of the app that allow for secret transmissions of data.”

In fact, he emphasized particularly that “surprise minimization” is a major focus for global DPAs going forward.

He also made it clear that it isn’t only app developers who will be held accountable. “Providers of platforms are in the first place responsible for their platforms, of course,” he said. “Although they do offer general privacy settings for mobile devices, these are insufficiently granular … Enforceable self-regulation programs should be an essential part of the industry.

“In the coming year, we will seek to engage with the industry to make sure the essentials of data protection (are) put into their apps,” Kohnstamm continued. “We don’t want to spoil the fun, but misuse of data has to be prevented. And rest assured that if a soft approach will not result in effective privacy, then data protection officers stand ready to join in enforcement actions as we have done before.”

Both mobile and desktop developers should pay attention, particularly, to how they use tracking. In another resolution on tracking and privacy, the collected commissioners made it clear—with only Slovenia and France abstaining—that tracking must be done with purpose limitation, only with consent and control by the user and without the use of “invisible tracking elements.”

Further, the resolution explicitly calls for organizations to “refrain from deriving a set of information elements (fingerprint) in order to uniquely identify and track users for purposes other than security/fraud prevention or network management.”

They also called for an effective Do-Not-Track standard. (You can find a full list of the resolutions here.)

To celebrate, Mauritius will play host to next year’s International Conference of Data Protection and Privacy Commissioners on September 22, 2014.

Read More By Sam Pfeifle:
What NIST Is Hoping To Get Out Of Its Privacy Grant Program
PRIVACY IN POP CULTURE: Lexicon Makes Magic of Privacy
Karen Neuman Named DHS CPO
The End for DNT? Not So Fast

In what the U.S. Federal Trade Commission calls a "first-of-its-kind" enforcement action, the FTC filed a proposed order against GoodRx, a U.S. health care company, for violating the Health Breach Notification Rule and the FTC Act. The proposed order prohibits GoodRx from disclosing user health data...
END_OF_DOCUMENT_TOKEN_TO_BE_REPLACED queue Save This

Takeaways from Ohio court ruling on ransomware and insurance exclusions

In Emoi Services LLC v. Owners Insurance Company, the Ohio Supreme Court recently found software is an intangible item that cannot experience direct physical loss or damage and, therefore, the plaintiff’s inability to access or use its software during a ransomware attack was outside the scope of its...
END_OF_DOCUMENT_TOKEN_TO_BE_REPLACED queue Save This

U.K. Prime Minister Rishi Sunak announced the creation of four new government departments, including a dedicated Department for Science, Innovation and Technology focused on technical innovations. The changes remove digital and data policy responsibility from the Department for Culture, Media and S...
END_OF_DOCUMENT_TOKEN_TO_BE_REPLACED queue Save This

Covered entities under the California Consumer Privacy Act are on the cusp of long-awaited legal certainty regarding updated compliance efforts. The California Privacy Protection Agency Board voted 4-0 at its latest meeting to finalize its first set of proposed California Privacy Rights Act regulati...
END_OF_DOCUMENT_TOKEN_TO_BE_REPLACED queue Save This