Which is worse: A world of constant self-imposed surveillance or a world where sexual partners ask one another to rate their performance on a scale of one to 100 just after they’ve brushed their teeth?

No need to choose! Dave Eggers, in his new novel, The Circle, creates a world where you get both, thanks to the societal and economic dominance of the search/social/commerce operation known as The Circle, which is basically every cliché you’ve ever heard about Google, Facebook, Amazon, Yahoo and Twitter, all wrapped into one: The campus is sprawling and better than any university’s; the company parties are opulent, and yes, the whole operation seems an awful lot like a cult.

While our main characters are largely employees of The Circle, the company’s customers also feature prominently as a sort of nebulous blob of not-very-bright humanity. Both combine in Eggers’ dystopian near-future to take alternately amusingly insane and terribly depressing actions, depending on whether you think they defy entirely rational behavior. Eggers’ true skill involves walking truly expertly the line between unbelievable farce and poignant truth about the human condition and today’s increasingly hyper-connected and -paced society.

This is a world where everybody-gets-a-trophyism has met narcissism unchecked alongside do-gooderism run rampant, creating hoards of otherwise bright people who have no problem whatsoever—even pine for—allowing their employers to know where they are at all times, every tiny health detail, heck, every little thing at all. Who can only see the benefits of tracking every child’s movement with a chip in the ankle. Who fall prey to—nay, come up of their own accord with—slogans like “secrets are lies,” “sharing is caring” and, here’s the kicker, folks, “privacy is theft.”

This is a world where everybody-gets-a-trophyism has met narcissism unchecked alongside do-gooderism run rampant.

Like a horror film, the novel contains any number of instances where you’ll find yourself exclaiming aloud, “Why would you do that?”

Well, good intentions. And the lack of anyone with a care in the world about privacy. Of course, Eggers is such a good writer, and his characters so fully formed, that the logic sometimes seems scarily unassailable. Our central character, the often endearing Mae, can’t think of a “good” secret, and in the moment, you’re right there with her. If you really cared about other people, wouldn’t you want them to know everything about you? By keeping things to yourself, you’re depriving others of your experiences.

How’s this for emotional blackmail?

“I have a son, Gunner, who was born with CP, cerebral palsy. Though he’s living a very full life, and we’re trying, always, to improve his opportunities, he is confined to a wheelchair. He can’t walk. He can’t run. He can’t go kayaking. So what does he do if he wants to experience something like this? Well, he watches videos. He looks at pictures. Much of his experiences of the world come through the experiences of others … Does it feel right to have deprived them of seeing what you saw?”

Got that? If you do something cool and don’t post online about it, you’re actually depriving the sick and infirm of that experience. You’re hoarding. You’re a bad person. You don’t want to be a bad person, do you?

To go “clear,” in fact, to live with a camera around one’s neck that anyone can check in on at any time—except, in a rule seemingly designed by Eggers to leave him at least some connection to reality for readers, after 10 p.m.—is a badge of honor taken on by politicians the world ’round.

Just as it is by Mae. And do you get it? Her name is MAY! Her consent is always implied. 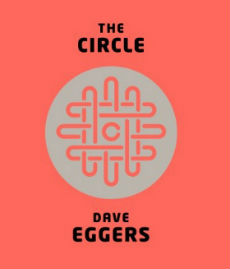 While The Circle has been oft-compared to George Orwell’s 1984, thanks to the obvious musings on surveillance and its consequences, in form it is more akin to Animal Farm, with obvious stereotyped stand-ins for societal trends. Mae is a classic coastal millennial: well-educated, desperate for fulfilling work in a world where a degree barely gets you in the door at Starbucks, tech-capable and eager to please. The Circle’s three top executives are all easily recognizable: the itinerant tech genius who’s wildly rich but still always wears a hoodie, the ultra-sensitive tech mogul bent on saving the world and the calculating VC type pushing buttons behind the scenes.

And then there is Mae’s ex-boyfriend Mercer, a stand-in for the privacy advocates. He eventually communicates with her only via pen and paper and writes things like, “I await the day when some vocal minority finally rises up to say it’s gone too far, and that this tool … must be checked, regulated, turned back, and that, most of all, we need options for opting out.”

Even if Mae’s parents are fans of Mercer’s, though, representing the older and wiser generation that will never be comfortable with constant surveillance even if it’s in exchange for free healthcare, Mae only becomes more and more repulsed by him (you privacy pros are not going to like what happens to Mercer) as she becomes more and more indoctrinated into The Circle’s way of life.

The company get-togethers are optional. But not going must mean you don’t like it there. Did you post on your feed that you liked Portugal? Well, then you better show up for that Portugal lunch on campus or the organizer will be VERY offended. Did you accept someone’s request that you join their professional community? Expect a request for a recommendation right around the corner.

Those looking for tips for winning arguments via passive-aggressive maneuvers will find a cornucopia here. And if you don’t cringe at least 50 times as you recognize yourself and your company in the lunacy being depicted, well, you’ve been luckier than I have in your corporate and online experiences.

Ultimately, that’s why The Circle works as satire: It generates a visceral reaction in the reader and forces you to deeply question the choices you’re making and, likely, the choices your company is making. There is an ingrained and underlying cynicism here that you may find yourself disagreeing with, but that makes the novel all the more of a must-read. If this is the world without privacy pros, what will the world with them look like?

Apple announced Wednesday a suite of data security improvements it plans to roll out in the coming months that aim to protect consumer data and ward off hackers.  The three data security features include iMessage Contact Key Verification, Security Keys for Apple ID and Advanced Data Protection for ...
END_OF_DOCUMENT_TOKEN_TO_BE_REPLACED queue Save This