The legal world is still fond of reference books. How many of you have giant binders on your shelves, into which you insert this year’s latest update on some area of law or other?

For a quickly changing legal environment like privacy, though, your binder fills up fast. Pretty soon, you need another binder.

Luckily, we have the Internet. DLA Piper has attacked the problem of surveying the world’s data protection laws and regulations with a handy online and interactive guidebook for which they’ve released version 3.0 just in time for Data Privacy Day. 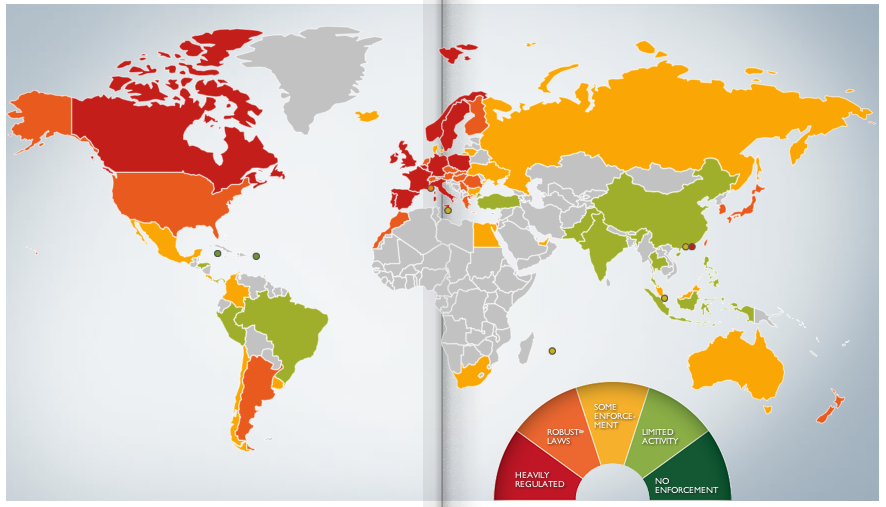 DLA Piper has released an interactive guide to the world’s data protection laws and regulations.

It begins with a map of the world, with countries colored to indicate the strength of their privacy laws (red=heavy regulation; green=not so much), and then you have tabbed options for turning the page (literally, there is a sound and everything) to see a specific country’s law, regulator contact information and then specifics on how a country regulates anything from infosecurity to breaches to electronic marketing.

It’s also possible to set two countries side by side and compare the way they regulate date protection.

And the mobile interface? Really quite good. Further, should you be relatively old-school, you can download all of the information in a readable PDF.

Of course, there’s also handy contact information for DLA Piper lawyers who work in each of the countries you can select. The firm didn’t do this completely out of the goodness of their collective hearts.

“People are saying, ‘You’re crazy to give away this kind of information,’” said DLA Piper Partner Patrick Van Eecke, based in the firm’s Brussels office, “but our strategy is that we can give away this kind of information because we want to get into more complex legal situations like developing strategies for data protection. It’s not interesting just advising on what you have to do in one country vs. another. We don’t want to make our money with that.”

This does represent a serious investment, though. There are 72 different jurisdictions covered in the tool, and the PDF runs to some 360 pages of information. As a living, breathing online organism, it also requires almost constant updates so as not to become quickly outdated.

“Just as an example, take South Africa,” said Van Eecke. When the tool was first being built, they had a law, but it hadn't been signed into law by the president yet. “So we explain the bill, but we can’t say they have legislation because they don’t," said Van Eecke. Then, as soon as the president signed on the dotted line, the tool was updated to reflect that the law is now in effect. Try doing that with a book.

Now, let the debate start over whether the U.S. is properly designated as having “Robust Laws” but not quite “Heavily Regulated.”

Lines have been drawn for some time now regarding where U.S. lawmakers are willing to go with preemption provisions in the proposed American Data Privacy and Protection Act. Those lines were defined back in 2019, and lawmakers' willingness to cross them for a compromise is still a tall task neither ...
END_OF_DOCUMENT_TOKEN_TO_BE_REPLACED queue Save This

A new era of children’s privacy rules has arrived. New laws focusing on the safety and mental health of kids and teens will have wide-ranging implications for the design of digital systems. California’s Age-Appropriate Design Code Act, which will go into effect July 1, 2024, is the first law in the ...
END_OF_DOCUMENT_TOKEN_TO_BE_REPLACED queue Save This

On Sept. 2, Ireland's Data Protection Commission issued a landmark decision concerning the processing of children’s data in connection with the Instagram social media service. The decision, issued to Meta Platforms Ireland Limited (Facebook Ireland Limited at the time of commencement of this inquiry...
END_OF_DOCUMENT_TOKEN_TO_BE_REPLACED queue Save This

New York’s Attorney General Letitia James is a longtime public servant who has regularly and repeatedly shown her commitment to protecting consumer rights and privacy. James began her legal career as a public defender for the Legal Aid Society before becoming an assistant attorney general. In 2013, ...
END_OF_DOCUMENT_TOKEN_TO_BE_REPLACED queue Save This

In the past several months, China has witnessed some key regulatory developments in its cross-border data regime. This is evidenced by the promulgation of the long-awaited Measures for Security Assessment of Outward Data Transfer with the effective date of Sept. 1, the release of a new set of TC260 ...
END_OF_DOCUMENT_TOKEN_TO_BE_REPLACED queue Save This