Several witnesses appeared before the House Energy and Commerce subcommittee on Tuesday to testify about the rapidly growing Internet-of-Things (IoT) ecosystem. With approximately 25 billion connected devices in existence, and counting, the economic benefits and job opportunities in IoT appears to be eclipsing any significant Congressional motivation to regulate this landscape.

In fact, the hearing followed an IoT showcase hosted by the subcommittee to demonstrate many of the technological innovations currently being developed by businesses. “We saw first-hand some of the innovative ways that companies are using the Internet and network sensors to create, enhance and customize products to better meet consumer preferences,” said Subcommittee Chairman Michael Burgess (R-TX).

There was agreement across the panel that Congress should have a “light-touch” approach to regulating the IoT and that the U.S. needs to have a national strategy in order to compete globally.

Rep. Marsha Blackburn (R-TN), who is chairwoman of the full committee, said, “It’s important we look at the size and scope when we look at the IoT.” She cited a recent Cisco report noting that by 2020, there will be as many as 50 billion devices connected to the Internet with a global economic output in the trillions of dollars.

“It behooves us to say, 'How do we get our hands around this?'” she said. “People like these services because it does add convenience, but it accelerates the probability of privacy and security” vulnerabilities. Harkening back to the Internet’s origins, Blackburn noted that it started with four people who were vetted and secure, and now, “we want to allow 50 billion devices to connect but with an infrastructure that provides protections” like it did decades ago.

So what role should Congress play, if any, in the IoT ecosystem?

“Congress should really look at how consumers are hurt or not hurt by uses of data,” said Information Technology and Innovation Foundation Vice President Daniel Castro, and it should not regulate the collection of data but rather harmful use. “We want data to be shared,” he said.

Intel’s Rose Schooler, who serves as vice president of the IoT Group and GM of the IoT Strategy and Technology Office, said that in addition to a light-touch regulatory approach, there should be an open dialogue among industry, consumer groups and lawmakers. She encouraged a focus on security and interoperability and strong public-private partnerships. “There should be a national IoT strategy, with open standards, open-sourced and interoperable,” she added. 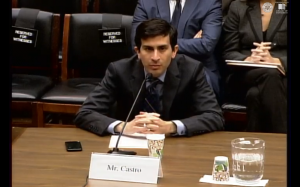 “Whenever there’s new technology,” said Castro, “there are fears. But many issues are resolved by the market. That’s why we want this light-touch approach. If you can’t have businesses using this data, you’re not going to see this magnitude of benefits.”

Castro also pointed to other sector-specific approaches that have worked in privacy regulation, noting there are industry-specific areas that could give rise to data use concerns, including in the education and healthcare fields. But for Castro, it depends on the consumer harm. “If we restrict regulation to data use, then it doesn’t matter how you got that information, the point is we regulate the use. That provides consumers the confidence that no matter where the data goes,” if it causes harm, then a company would be liable.

Tuesday’s hearing comes just months after the U.S. Federal Trade Commission (FTC) published a detailed report on the IoT and a day after it announced the formation of the Office of Technology Research and Investigation (OTRI) as the new successor to the agency’s Mobile Technology Unit. According to an FTC blog post, “The OTRI will provide expert research, investigative techniques and further insights to the agency on technology issues involving all facets of the FTC’s consumer protection mission, including privacy, data security, connected cars, smart homes, algorithmic transparency, emerging payment methods, big data and the Internet of Things.”

In its report on the IoT, the FTC included a series of recommended steps businesses can take to protect consumer privacy and security. In the January release of the report, FTC Chairwoman Edith Ramirez had said, “We believe that by adopting the best practices we’ve laid out, businesses will be better able to provide consumers the protections they want and allow the benefits of the Internet of Things to be fully realized.”

Significantly, the FTC said any legislated regulation of the IoT “would be premature at this point in time given the rapidly growing nature of the technology.” Clearly, Tuesday’s House subcommittee and its witnesses agree on that last point.

Can We Adapt to the Internet of Things?

The so-called “Internet of Things” is emerging and it promises to usher in profound changes that will rival the first wave of Internet innovation. As microchips and sensors are increasingly embedded into almost all the “smart devices” that we own and come into contact with, a truly “seamless web” of...
END_OF_DOCUMENT_TOKEN_TO_BE_REPLACED queue Save This

Law of the Connected Horse? FTC Appropriately in Learning Mode on Internet of Things

As the Federal Trade Commission (FTC) prepares to hold its first workshop on the “Internet of Things” (IoT) on November 19, early Internet era passages from the famous “law of the horse” debate between Judge Easterbrook and Professor Lessig seem apt. They remind us that with the emergence of new tec...
END_OF_DOCUMENT_TOKEN_TO_BE_REPLACED queue Save This

Designing for Privacy and Security: Lessons from a Hacked Baby Monitor

One of the biggest takeaways from last year’s Federal Trade Commission roundtable on the Internet of Things was the inherent security issues and vulnerabilities created by ubiquitous computing. Sure, there’s a big market out there for connected devices and smart tools, but if you’re not designing pr...
END_OF_DOCUMENT_TOKEN_TO_BE_REPLACED queue Save This

Greetings from Newfields, New Hampshire! I've reached a breaking point regarding people implying the Health Insurance Portability and Accountability Act Privacy Rule has anything to do with basic non-medical questions. Examples of this have popped up most recently regarding public figures' COVID-19...
END_OF_DOCUMENT_TOKEN_TO_BE_REPLACED queue Save This

Facebook announced plans to curtail targeted advertising capabilities to minors in the coming weeks. Targeting categories for children under 18 will be limited to age, gender and location, with Facebook noting advocates indicated young people "may not be well equipped" to make decisions on opting ...
END_OF_DOCUMENT_TOKEN_TO_BE_REPLACED queue Save This