Dutch Data Protection Authority (DPA) Chairman Jacob Kohnstamm used the IAPP Data Protection Intensive to announce for the first time a new Privacy Bridge Project that hopes to find common privacy ground between the U.S. and the EU outside of legal and regulatory frameworks. It will be headed up by the Institute for Information Law of the University of Amsterdam and the CSAIL Decentralized Information Group at the Massachusetts Institute of Technology and bring together roughly 20 privacy experts from both sides of the Atlantic in four two-day meetings, with the goal of delivering a paper in the summer of 2015.

Kohnstamm also said he aims to hold the global DPAs conference in Amsterdam, The Netherlands, in the fall of 2015 to explore the findings of that paper as the single defining issue of the conference. 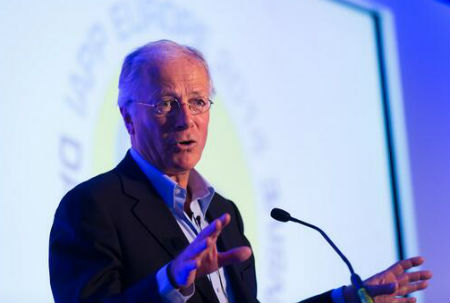 “Let’s be practical,” Kohnstamm said of the project’s goals. “Let’s not discuss the Fourth Amendment and the Treaty of Lisbon, because they won’t be changed anyhow. Let’s not try to fight each other.”

He noted that there is often talk of interoperability between the two privacy regimes, but that the term is often meaningless. “If a U.S. guy is talking about interoperability, he generally means, ‘get rid of that fundamental rights stuff.’ If it’s a European, he’s usually saying, ‘Come on, come on. Try to get some decent privacy bills passed on the Hill, will you?’ But neither side of the ocean will be successful in convincing the other side to fundamentally change either of their constitutions.”

He continued, “There will be no serious legislation passed on the Hill—in general—but certainly not as far as privacy is concerned. And I think the regulation will pass, whether it’s this year or next year. So let’s assume that will be in force pretty soon … So let’s not try to persuade the other side that one is better than the other, and let’s try to find practical, maybe technological solutions and see whether we can come up with some real suggestions.”

The Privacy Bridge group’s first meetings were held this past Monday and Tuesday in Amsterdam, with the likes of DPI audience members Fred Cate of the Indiana University School of Law and Bojana Bellamy, CIPP/E, of the Center for Information Policy Leadership, in attendance. Meetings will continue in Washington, DC, Brussels and Boston, MA, over the course of the next year.

“I’m happy that people were not laughing at me when I gave them this idea,” Kohnstamm said with a chuckle about his involvement. “I want to see whether we can stop fighting each other, maybe find solution without in any way touching on the legislation.”

On Nov. 1, 2021, China’s Personal Information Protection Law took effect and became the first Chinese law dedicated to protecting the personal information rights of individuals. However, due to a lack of implementation regulations and clarity, many companies face a situation where they are unsure ho...
END_OF_DOCUMENT_TOKEN_TO_BE_REPLACED queue Save This

August was shaping up to be the month U.S. privacy professionals might catch their breath while fluid discussions around the proposed American Data Privacy and Protection Act pause during U.S. Congress' summer recess. But now the U.S. Federal Trade Commission has everyone holding their breath once a...
END_OF_DOCUMENT_TOKEN_TO_BE_REPLACED queue Save This