At the 2012 Online News Association conference, one of the most highly attended sessions was Webbmedia Group CEO Amy Webb’s 10 Tech Trends for 2012. Three years ago, the top trends Webb pointed to included consumers’ distrust of the media (it was campaign time, after all); dynamic pricing and content based on behavioral tracking; wearable tech, and ambient social networks that listen in on social media and allow users to know who around them is posting.

Being that many of these trends involved data collection, use and analysis, I had to ask the question: “I work for a trade association for data protection,” I said, what about the privacy issues with this stuff?

Actually, we’ve got the video. Click the image and fast forward to 47:44: 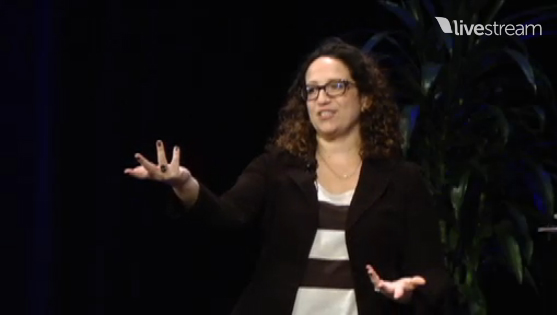 As you can see, Webb responded, graciously acknowledging that my question was a good one, and then shut. me. down.

“Older people seem to be concerned about their data. The overwhelming number of people using this stuff have no perception. They’re growing up in a time where they don’t understand the distinction between public and private … Now may be a good time for you guys to pivot,” she said, holding her hand out to me as though offering up a gem of knowledge and added with a smirk, “… potentially.”

That said, she wasn’t wrong in her data. Study after study was coming out in support of her theory that only old people cared about privacy. In fact, she was more right than any of us could have guessed: “Something may happen at some point for them to suddenly have those fears, but for right now, the people who are coming up and using the stuff are not in that situation.” Nailed it.

Three years and an Edward Snowden later, Webb is the one who has pivoted. She has just released The Tech Trends You Can’t Ignore in 2015 in the Harvard Business Review, outlining six of her top trends. Much to my satisfaction, data privacy has made the list.

Citing a Ponemon study that shows 91 percent of Americans think consumers have lost control of their personal information and their data, she notes, “Whether it’s fear of a third party monitoring our mobile phone activity or concern about the safety of online transactions, people are increasingly concerned about their privacy, and they’re pointing the finger at business, not maleficent hackers.”

Oh, and one more thing she nailed in 2012: The importance of women in technology.

In a column for Harvard Business Review, Webbmedia Group CEO Amy Webb shares her vision of the most significant and emerging technology trends, including deep learning; smart visual personal assistants; what will be the new Uber; algorithmic oversight; data privacy, and block-chain technology. “Our ...
END_OF_DOCUMENT_TOKEN_TO_BE_REPLACED queue Save This

What is the role of privacy professionals in preventing discrimination and ensuring equal treatment?

It is increasingly clear that preventing discrimination and ensuring equal treatment is a very important topic, not only for individuals, the general public and authorities, but for corporations, as well. Cases of racial injustice, age discrimination or workplace discrimination are all topics that ...
END_OF_DOCUMENT_TOKEN_TO_BE_REPLACED queue Save This

In January, the European Data Protection Board adopted the first version of its guidelines on processing personal data in the context of connected vehicles and mobility-related applications. More than 60 formal comments were submitted during the public consultation period from the likes of member st...
END_OF_DOCUMENT_TOKEN_TO_BE_REPLACED queue Save This

While working on a project for a client aligning them to the new NIST Privacy Framework, I was able to do a deep dive on a few topics that the framework utilizes but doesn’t detail. One of those is the idea of “ecosystem risk.” The inclusion of ecosystem risk represents a notable change from the NIS...
END_OF_DOCUMENT_TOKEN_TO_BE_REPLACED queue Save This

One of the oldest legal principles in Anglo-American jurisprudence, attorney-client privilege, is facing a paradigm shift given today’s rapid work culture evolution. Technological advancement, while providing faster and more efficient communication and productivity, has presented an increased risk l...
END_OF_DOCUMENT_TOKEN_TO_BE_REPLACED queue Save This