Why does privacy matter? That was the question Harvard Prof. Michael Sandel asked his virtual classroom of 3,000 privacy pros at last week’s Global Privacy Summit. As it turned out over the 30-minute discussion that followed, it was kind of a tough question to answer concisely. 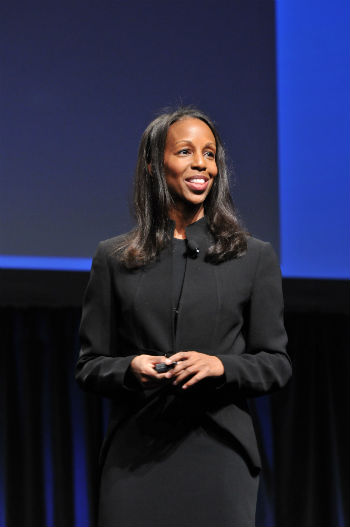 Sarah Lewis during her keynote address at the IAPP Global Privacy Summit, where she discussed the importance of privacy to failure and success

From the same stage the next day, historian and curator Sarah Lewis opened her keynote recalling stories of famous failures. Samuel Morse invented the telegraph, but only after he’d decided to use the infrastructure of his failed attempt at painting as the frame for the revolutionary technology. That original piece now sits in the White House's Oval Office. Then there's Martin Luther King, Jr., whose report cards show he received C grades in none other than “public speaking” when he was a schoolboy; he'd of course go on to change civil rights in America with his orations. And then there's Harry Potter author JK Rowling, who was a single mom on welfare and rejected by publishers 14 times before she signed her book deal.

But what does failing and then succeeding have to do with privacy and why it matters? Well, it turns out, quite a bit.

Lewis said what these now-etched-in-history names have in common are two things: that “they were all able to see something before it happened” and they had the benefit of a private space in which to work. That is, private spaces in which to fail without the judging eyes of the public or their peers, which matters because it's that fear of critique, of being watched and therefore  judged, that sometimes inhibits us from thinking big. The instinct is to self-censor in order to protect ourselves.

“How many times have you been in a meeting and suppressed the innovative idea that perhaps would have helped your organization?” she asked. “In many cases, privacy has been the only way we’ve created the innovative ideas we’re honored to celebrate. When the mind barricades itself from critique, we have the permission to put out into the world our most iconoclastic ideas. Putting something creatively significant out into the world requires a temporary removal from it.”

In a lab experiment (check it out here), Lewis explained, jazz musicians were hooked to fMRI machines, which scanned brain activity as they played their instruments. When the musicians improvised, the areas of the brain connected to self-expression lit up with activity while the parts of the brain associated with judgment were suppressed. The brain activity demonstrated when the musicians improvised was close to the activity seen when one is REM dreaming, “when we have no one to fear and our ideas are completely our own,” Lewis said.

That is, the brain could be seen carving out for itself a private space where the musician could be free, protected from their own inner-critic and self-censorship.

What’s dangerous is that privacy has rapidly dwindled in the Digital Age, and now, against a backdrop of mass surveillance culture, calls for transparency are rampant. The number of spaces that are truly private—without eyes of any kind watching, for sure—feel fewer and fewer.

At the same time, the ability to share ideas instantaneously and en masse on sites like Facebook and YouTube and Instagram, for example—the capitalistic scramble that has people frantically asking, “How can I get seen? How can I get discovered?”—strips the creative process of the incubation time essential for early failures and subsequent modification.

As a practical example, take comedy clubs. For decades, they’ve served as incubators for up-and-coming comics, and even veterans, to test material out. But that’s not really true these days, Lewis said, as smart cameras now often capture the set and circulate it in the virtual world, where it becomes defenselessly open to the often-gutter-talk hotspot that is the comments section of any given website. It may have needed time in the “lab” being tweaked and redlined until the wordsmith felt it was ready for sharing.

What could it have been then?

To answer Prof. Sandel’s earlier question: Privacy matters perhaps because without it, innovators like the ones who have changed our world may lose the chance to change it.

The COVID-19 pandemic has seared contact tracing into our collective consciousness, but it doesn't mean the concept is anywhere near new. Noted Deputy U.S. Chief Technology Officer Nicole Wong recently during an online event: Contact tracing was used to identify the original Typhoid Mary in 1907, a...
END_OF_DOCUMENT_TOKEN_TO_BE_REPLACED queue Save This

The Privacy Advisor Podcast: Suing to stop the surveillance

Recently, Jay Edelson and his team at Edelson PC have filed three different class-action lawsuits related to unwanted surveillance: One against security company ADT, one against a Chicago hospital and another against biometric start-up Clearview AI. In this episode of The Privacy Advisor Podcast, ho...
END_OF_DOCUMENT_TOKEN_TO_BE_REPLACED queue Save This

The California Privacy Rights Act officially cleared the threshold to make it into the November 2020 ballot last week. It was a bumpy road to certification, but Californians for Consumer Privacy ended up with significantly above the minimum required verified signature count. This, despite most of Ca...
END_OF_DOCUMENT_TOKEN_TO_BE_REPLACED queue Save This

2
While the EU General Data Protection Regulation has proven to be a valuable framework in the two years since it came into force, it still requires some work regarding proper implementation by EU member states and a potential modernization of cross-border data transfers. That was some of the message ...
END_OF_DOCUMENT_TOKEN_TO_BE_REPLACED queue Save This