To be sure, this is no small task, but one key theme throughout the session was the importance of considering the person more than the data. To consider the person in a global ecosystem, however, is challenging as people and cultures think varyingly about privacy. Mobile, for example, is now making its way into developing countries where, in some areas, illiteracy is more prevalent.

“You could abide by all the global privacy rules,” said GSMA Director of Privacy-Public Policy Patrick Walshe, “but it doesn’t mean that users will trust you.” Using standard icons gives people a trusted touch-point.

It’s important to note, too, that a wide range of technology, such as smartphones and wearables, is set to broadcast and, conversely, collect data by default. “We’re now in a default broadcast society,” said Walshe. “Things have to change.” 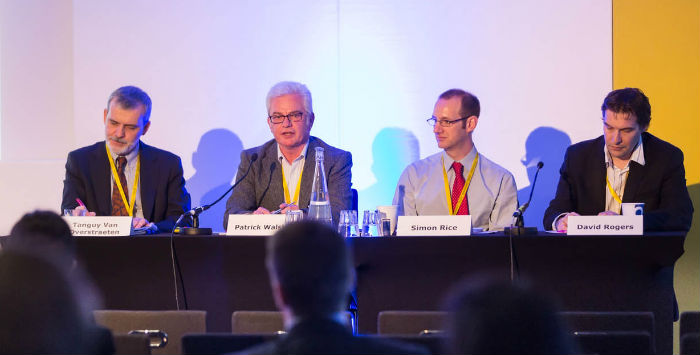 One major component to a user-centric approach, the panel argued, is self-regulation with oversight. Walshe discussed the GSMA’s mobile privacy principles in relation to other mobile privacy guidelines. “The only self-regulated guidelines being implemented,” he said, “are the GSMAs.” Of course, in the U.S. the California Office of the Attorney General, Federal Trade Commission, Department of Commerce’s National Telecommunications and Information Administration and others have issued guidelines, but Walshe questioned whether there was oversight, asking, “Do they just gather dust?”

He said the GSMA’s accountability framework has been adopted by many operators as well. The framework includes oversight, assurance, transparency, remediation and enforcement. “This is about commitment,” he said, adding, “You can’t expect your users to understand all these complexities.”

And though users expect their smartphones to be secure by default, Copper Horse Security Specialist David Rogers said users will jump over any obstacle to get what they want, often against their best interests. “Users will always choose dancing kittens over security,” he said, later adding, “If you give them something attractive at the end of the rainbow, they will get there.”

Rogers said social engineering is one huge problem, much more so than malware. Quoting Georgia Tech’s Patrick Traynor, Rogers said, “You are more likely to get struck by lightning in your entire lifetime than you are to be infected by mobile malware.”

Preventing users from clicking untrusted links or download sketchy apps, on the other hand, is a much greater problem.

“Our challenge,” said Rogers, “is to try to eliminate barriers that encourage automatic behavior.” He said users should be incentivized to make good decisions on mobile.

In addition to securing the business and trust of users, the steady gaze of regulators is a motivator to get privacy right in the mobile environment as well. UK Information Commissioner’s Office (ICO) Group Manager (Technology) Simon Rice sent out a heads up: “If you think your app is on the edge, get your house in order because someone might come knocking soon.” He said currently there are some cases moving through the ICO—mostly involving data security issues. Rice also noted that 49 percent of users won’t download an app due to privacy concerns; the ICO tries to offer carrots as well as sticks.

In the end, mobile privacy really isn’t fundamentally different from data privacy as a whole. Rice stressed what he called the first data protection principle: “Explain before you do something they don’t expect.”

A third iteration of the Washington Privacy Act came before the Senate Environment, Energy & Technology Committee for a public hearing Thursday where testimony ranged from support to criticism. The 2021 bill, Senate Bill 5062, follows last year’s proposal, which failed to reach consensus in the...
END_OF_DOCUMENT_TOKEN_TO_BE_REPLACED queue Save This

The New York Times reports on the privacy concerns around smart cushions designed by a Chinese tech company designed to monitor employees' health. The cushions scan staff for signs of fatigue,  measures their heart rates and keeps track of how long they spend at their desks. Hebo Technology, the cre...
END_OF_DOCUMENT_TOKEN_TO_BE_REPLACED queue Save This

Ireland’s Data Protection Commission released guidance on data processing issues related to closed-circuit television systems after receiving a large number of complaints regarding their use in homes. The DPC said domestic CCTV systems should only operate to capture images of people within the perim...
END_OF_DOCUMENT_TOKEN_TO_BE_REPLACED queue Save This

A new privacy setting is being added to Google’s smart speakers that limits the collection of data about users' interactions with Google Assistant on the speaker, according to Consumer Reports. Guest Mode, which automatically deletes interactions with Google Assistant, is now available on all Google...
END_OF_DOCUMENT_TOKEN_TO_BE_REPLACED queue Save This