She calls herself a data artist. And not in the way the dude behind the deli counter calls himself a "sandwich artist." She didn't launch her career in art until she'd succeeded in the tech world for a couple of decades, but Laurie Frick is an artist in the most earnest use of the word. Data is both her muse and raw material.

You may know Frick as the creator of frickbits, an app that recently raised 450 percent of its Kickstarter goal. It allows cellphone users to use the GPS data collected via their iPhone to create an artistic representation of their comings and goings. Its tagline: "Take back your data and turn it into free art." She also creates hand-made wall installations that represent self-tracking data like sleep, Internet use and location.

Data's a material she's comfortable working with, after all. This particular afternoon, she's sitting in the lobby of Samsung Research in San Jose where she's currently an artist-in-residence at its Services Innovation Lab, as she does this interview with The Privacy Advisor. Samsung is just one high-tech name on Frick's resume, however. Before she was a full-time working artist, she was Hewlett Packard's marketing director; Compaq's VP and general manager of new consumer products, and co-founder of a mobile telecom start-up, among other accomplishments. 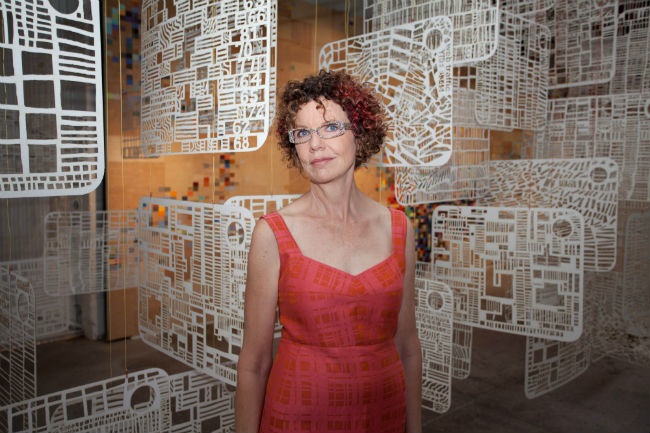 Arist Laurie Frick stands in front of her installation, "Quantify Me," made of 96 laser-cut drawings.

"I'm pretty sophisticated in terms of what technology can do," Frick said. "In some ways, the art is kind of a combination of the different pieces of what I've done in my life."

Frick, who will display some of her art at the IAPP's Global Privacy Summit in March as the event's artist in residence, doesn't think we should be afraid that our devices are constantly tracking our movements.

"Sometimes artists have this very sort of, super lefty—really, in some ways—naive view of data and the idea that you won't be able to hide or big corporations are after you," she said. "I just don't have that perspective at all."

Just the opposite, in fact. To Frick, that kind of data is actually useful. It provides unparallelled insights into ourselves that we previously couldn't have seen.

"I think data is going to be the way we understand who we are. Everything about you is being measured and captured, but people don't get to see the data that's collected about them," she said. If they could—if they could see their own data, their own individualized patterns of activity—they could understand themselves so much more, Frick believes.

Frick started tracing herself five years ago via a site called the Quantified Self, which aims to help people generate meaning from their own data. For 1,000 nights, she measured her and her husband's sleep using a sleep monitor called ZEO. She was stunned at what it revealed.

"It was this amazing moment of seeing that his sleep patterns and my sleep patterns were really distinct and different and identifiable, and it had this reflection of your personality," she said. "It had something connected to who you actually are. "

To gather data for ongoing projects, Frick uses a Fitbit, smart watches, a WiFi body-weight scale and auto-trigger reminders to measure her steps, breathing, heart-rate, weight, calories, how her stomach feels, every app she uses, the time she spends on her phone and even her urine pH. She uses that data to create her work.

"Anything that's easy to gather," she said. "The truth is, getting data is the easy part. There's way more data than time to make the artworks."

Frick's excited, she said, to have some conversations with privacy pros next month, though she knows many will be coming from the other side of the spectrum. Where the prevailing themes in the privacy field tend to be data minimization and anonymization, Frick is in favor of just the opposite.

"I’m trying to tell people, 'Rather than hiding, I want more,'" she said. "If data is how to figure out who you are, why are you running from it? Maybe I’m just further ahead, because I see there’s no stopping the amount of data collected."

But she says she's not naive; she understands there are bad actors out there, and while she believes most of the corporations collecting vast streams of data aren't using it maliciously—after all, she would know, having worked for some of them—she understands nefarious uses of data, like discrimination, for example, does happen. And that's part of where the conversation with privacy pros come into play.

"It's a problem," she said. "We haven't solved that." But the first step is knowing what data is collected, and she sees companies starting to do that. She likens it to the "going green" movement. It's becoming a competitive differentiator.

In the meantime, she'll keep using the digital exhaust created every millisecond to make something she hopes betters us all. If there's no stopping it, we might as well use it.

"Art makes data sticky," she said. "It makes you look. It's a metaphor for you as a human; another way to see yourself."

We know, there's lots of privacy news, guidance and documentation to keep up with every day. And we also know, you're busy doing all the things required of the modern privacy professional. Sure, we distill the latest news and relevant content down in the Daily Dashboard and our weekly regional diges...
END_OF_DOCUMENT_TOKEN_TO_BE_REPLACED queue Save This

Building a culture of privacy: Legal compliance as a result, not a goal

This series by the team at Sentinel examines the rationale and benefits of building a culture of privacy in your organization by highlighting five organizational drivers that, in combination, can result in lasting change. In this second article, we’ll provide a look at how a culture of privacy can h...
END_OF_DOCUMENT_TOKEN_TO_BE_REPLACED queue Save This

In the U.S., it is quite common to sign a waiver at everything from your local gym, the tanning salon (you aren't still tanning, are you?) or the kids' playplace indicating that you assume the risk of the activity and agree not to sue the company facilitating it in the case of injury. That's because...
END_OF_DOCUMENT_TOKEN_TO_BE_REPLACED queue Save This

Proportionality — that’s the watchword companies need to adhere to in times of crisis. The challenge of the COVID-19 pandemic and concerted efforts to stop its spread have thrown data protection law into the global spotlight. With companies and authorities alike doing everything they can to stem th...
END_OF_DOCUMENT_TOKEN_TO_BE_REPLACED queue Save This

The COVID-19 pandemic has brought many things in life to a screeching halt. For many organizations, the outbreak has meant shuttering, limiting or digitalizing most, if not all, operations. Those types of transitions and subsequent hardships have led some in the privacy space to question whether it...
END_OF_DOCUMENT_TOKEN_TO_BE_REPLACED queue Save This