If marine biologist-turned-best-selling author Peter Watts is an expert on anything, it’s mammals. Speaking to 400 or so privacy pros and regulators gathered last week at the IAPP Canada Privacy Symposium to talk privacy and data protection, he used that experience to send a rather jarring—and anything but conventional—message:

Mammals don’t respond well to surveillance. We consider it a threat. It makes us paranoid, and aggressive and vengeful. But we’ll never win against the giant corporations and governments that watch us, Watts argued, so all we can develop is a surefire defense.

Think “scorched earth.” If we can’t protect the data, Watts posited, maybe we should burn it to the ground.

Hear him out: Mammals will always respond to the surveillance threat as they would any threat—with aggression, in the same way the natural selection process has shaped every other life form on this planet.

“Anybody who thinks their own behavior isn’t at least partly informed by those legacy circuits has not been paying attention,” he said.

Watts pointed to author David Brin’s assertion during his keynote recently at the IAPP’s Global Privacy Summit that while our instinct is to pass a law aimed at telling governments and corporations to “stop looking” at us,  we should instead turn our gaze to them in the name of reciprocity. 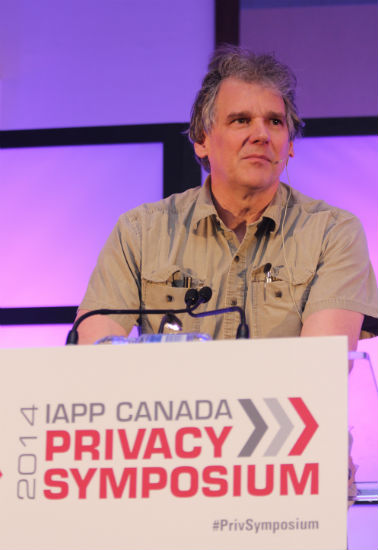 “It’s not telling them do not look,” Brin said during his speech. “It’s looking back.”

But Edward Snowden is currently living in Russia after he tried to “look back.” And as someone who’s worked a lot in the past with mammals, Watts knows that, biologically, looking back is a bad idea: “To get into a staring contest with a large, aggressive, territorial mammal primed to think of eye contact as a threat display … I can’t recommend it.”

“Natural selection favors the paranoid,” Watts said. Those who run away. In the earliest days of man on the savannah, when we roamed among the predatory, wild animals, someone realized pretty quickly that lions stalked their pray from behind the tall, untamed grass. And so anyone hoping to keep on breathing developed a healthy fear of the lions in the grass and listened for the rustling in the brush in order to avoid becoming lunch for an animal more powerful than themselves. It was instinct. If the rustling, the perceived surveillance, turns out to just be the wind? Well, no harm done.

“For a very long time, people who don’t see agency have a disproportionate tendency to get eaten,” Watts noted.

And so, we’ve developed those protective instincts. “We see faces in the clouds; we hear ghosts and monsters in the stairs at night,” Watts said. “The link between surveillance and fear is a lot deeper than the average privacy advocate is willing to admit.”

And the governments and corporations have figured out how to use those fears, he said. Like our early ancestors trying to see the lions in the grass, we ourselves are being stalked. And in our case, it’s not paranoia. The lions are there, watching.

“A lot of critics say blanket surveillance treats us like criminals, but it’s deeper than that,” he said. “It makes us feel like prey. We’re seeing stalking behavior in the illogical sense,” he said.

Corporations collect our data and monitor our geographical movements stealthily for profits, he said; governments tell us to trade privacy to combat terrorism. Even companies that want to do the right thing and aim for transparency on data collection have to comply when the feds come knocking, he said.

“Let’s assume, somewhere out there, there really is someone trying to protect privacy,” Watts said. “How do you do it when at any moment the government could come for you?”

His answer isn’t likely to win him a lot of fans among regulators and lawmakers, he knows. Nevertheless, he suggests to privacy pros: Create a kill switch, so when they government comes for your data, everything evaporates “before the lions can get their hands on it.”

“Here’s a wild thought: Don’t just offer data protection, especially since you can’t guarantee it,” he said. “Offer data destruction instead. I’m not talking about having the lions lie down with the lambs. It’s more Darwinian than that, where when the lions come, you burn down your chunk of the lamb before the lions get their hands on it. A scorched-earth society.”

He quickly added he didn’t expect many in the room to embrace the idea, and he understands “the cats get to write the laws for the mice.”

Maybe it sounds like a fantasy, but look at Lavabit and Silent Circle, among others, who shut down rather than give the government access to the data they sought.

“That’s why I think a scorched-earth approach, irrational as it might seem, might actually take off,” Watts said. “It appeals to those of us who feel powerless and screwed over and want to take back some measure of control of our lives, even if it costs us. I personally don’t use cloud-based services, but I’d sign up for a scorched-earth service purely for political support.”

And, hey, Watts said, it’s at least as likely that we’ll see a business model for guaranteed data destruction “as a world of rainbows and unicorns in which the gorillas that today set wire taps let us gaze into their eyes.”

The proposed American Data Privacy and Protection Act feels so close and yet so far away. The comprehensive privacy bill is on the cusp of a U.S. House floor vote, a first for any federal privacy proposal. But the bill's fragile nature is being tested at a crucial point in the legislative process as...
END_OF_DOCUMENT_TOKEN_TO_BE_REPLACED queue Save This

Two federal bills to protect children and teenagers’ online privacy were passed out of the U.S. Senate Committee on Commerce, Science and Transportation during a markup session July 27.   Committee members passed an update to the Children’s Online Privacy Protection Act with a voice vote carried by...
END_OF_DOCUMENT_TOKEN_TO_BE_REPLACED queue Save This