The result? A civil war that has completely destroyed our political world. And the only thing that will save us is a fierce militancy that sees the watched becoming the watchers.

That was the message keynote speaker David Brin posed to the sold-out crowd here at the IAPP’s Global Privacy Summit in Washington, DC, yesterday.

The main reason for such political and civil unrest is the notion that privacy is under threat because we’re being watched. But in fact, Brin said, we’ve had more privacy and anonymity than any other generation. And though that sense of privacy is being diminished now, it can be protected still. But not by exercising the collectively reflexive muscle we have been as of late.

We’re going about this all wrong.

The tendency, after breaches such as Target, for example, is to whine. “Don’t look at me!” Brin imitates. The reflex is to aim to pass a law to tell governments and corporations not to look at us. And that’s a natural reflex. But that approach won’t work, Brin said. 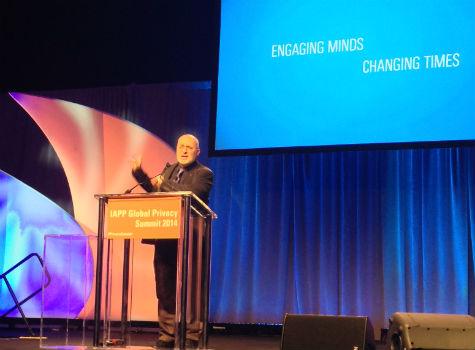 “I defy you to find one time when any elitists ever allowed themselves to be denied the reflex they think they need, the ability to surveil and look,” he said.

Industry has developed encryption and firewalls to fight back. But those are not the answer either, he said; there are about 50 ways around encryption, and firewalls continue to be dismantled year after year. Walls and barriers will never be the answer; people will just go over them or tear them down.

So what is the answer? Reciprocal accountability.

Brin invoked a nascent term, “sousveillance,” or the ability to look back at the “surveillers” from below their proverbially glaring eyes. After all, that’s how power and freedom have been gained throughout history: “By sicking the mighty against each other,” he said. “By creating an enlightenment system in which the mighty go after each other. I’m talking about a kind of militancy that is just as fierce as those who say, ‘Don’t look at me. Don’t look at us.’”

Instead of telling the NSA to stop, which will never happen, we have to tell the Peeping Toms and voyeurs’ mothers what they’re doing, so to speak.

“Because if you and (the Peeping Toms’) neighbors are as tech-adept as the Peeping Toms, you’ll catch them, and you can tell their moms. And you might have some privacy,” he said. “A world filled with light. A world in which it’s hard for conspiracies to hold together because whistleblowers are protected. Not that there will be no conspiracies at all. But we can constrain them. And that’s more powerful and militant than ‘Don’t look at me.’”

That’s done when individuals pull themselves into nongovernment organizations such as the American Civil Liberties Union, the Electronic Frontier Foundation, the IAPP, he said.

“Think in terms of how we might reclaim and seize the power to supervise,” Brin said, “to be the aggressive citizenry we were born to be, to be worthy of our ancestors who did this exact thing every time we moved to the next stage, so that we’re the ones who ride upon this tsunami into the future.”

On Jan. 15, Washington State Legislature's Senate Environment, Energy & Technology Committee held its first public hearing on a reintroduced version of the Washington Privacy Act. Those who have been following developments on the state's privacy legislation will recall that last year, despite ga...
END_OF_DOCUMENT_TOKEN_TO_BE_REPLACED queue Save This

We know, there's lots of privacy news, guidance and documentation to keep up with every day. And we also know, you're busy doing all the things required of the modern privacy professional. Sure, we distill the latest news and relevant content down in the Daily Dashboard and our weekly regional diges...
END_OF_DOCUMENT_TOKEN_TO_BE_REPLACED queue Save This

Lawmakers (continue to) grapple with how to regulate facial recognition

At a U.S. House Committee on Oversight and Reform hearing Jan. 15, lawmakers continued to investigate the potential risks posed by both government and commercial use of facial-recognition technology. The hearing was the third in a series on the topic as the committee seeks guidance on how to legisla...
END_OF_DOCUMENT_TOKEN_TO_BE_REPLACED queue Save This

The Washington State Legislature Senate Environment, Energy & Technology Committee held a public hearing on a new version of the Washington Privacy Act Wednesday. It was the first public hearing of 2020 for Senate Bill 6281, after a previous version of the proposal failed to pass in both the sta...
END_OF_DOCUMENT_TOKEN_TO_BE_REPLACED queue Save This

We know, there's lots of privacy news, guidance and documentation to keep up with every day. And we also know, you're busy doing all the things required of the modern privacy professional. Sure, we distill the latest news and relevant content down in the Daily Dashboard and our weekly regional diges...
END_OF_DOCUMENT_TOKEN_TO_BE_REPLACED queue Save This