And building trust with regulators—both at the federal and state levels—can go a long way in keeping your company out of litigation and press headlines.

To illustrate, Fulbright & Jaworski Partner Pamela Jones Harbour shared an anecdote involving an unnamed organization whose chief privacy officer had regularly reached out and built a relationship with the Federal Trade Commission (FTC)—an agency with an open door policy: Over time, she said, the CPO of said company had created a working relationship with the federal agency. Later, the organization was hit with a privacy breach. The CPO proactively reached out to the FTC through a relationship already built on trust, and avoided the headlines and an FTC consent decree—not to mention a biennial audit, monetary penalties, litigation cost and brand damage. 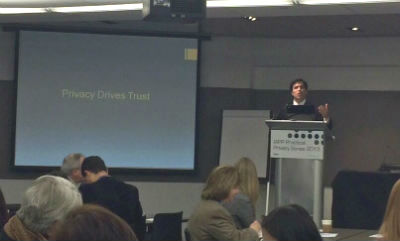 “Trust begins at home,” he said. “There has to be a corporate commitment that is there even when no one is looking.” The culture matters and businesses need to recognize that viewing privacy simply through a compliance lens is not enough. Training employees on privacy from top to bottom will help an organization “put its money where its mouth is.”

Establishing a respectful relationship with a regulator is another building block to build trust. “Assume that regulators are knowledgeable, sophisticated, cooperative and practical,” Rubinstein said. “If you don’t go into it with these in mind,” he warned, “it creates an aura of arrogance and disdain.”

But, these attitudes are not a one-way street. Regulators should also maintain a respectful relationship, he allowed. To help, reach out to regulators to introduce your business, share your problems, identify contacts, show an interest and seek input.

Inclusion is another key. “Don’t go behind a regulator’s back” if you’re already working with one, he warned. It’s okay to go over an official’s head if an incident needs to be escalated or brought elsewhere, but communicating that before doing so will go a long way in maintaining that trust.

Rubinstein also stressed that working with regulators is not a deposition. Openness, self-reporting breaches with regular updates and discussing your internal processes and consumer protection initiatives are essential.

Self-reporting is also one of four tenets in a recent Consumer Financial Protection Bureau (CFPB) bulletin on responsible business conduct. “One thing about self-reporting,” said CFPB Deputy Enforcement Director Deborah Morris, “it’s a sign you may have good internal procedures.”

Elizabeth Anne Khalil, senior compliance policy analyst at the FDIC, echoed Morris’ sentiment. “Be open,” she said, “be transparent. When examiners ask for information, be forthcoming and accurate.” Often, Khalil noted, an executive will step in to try to assuage the issue, but that can confuse the investigatory process. “Make sure the correct people in your organization are providing answers,” she said.

Trust begins at home. There has to be a corporate commitment that is there even when no one is looking.

Katherine Armstrong, an attorney with the FTC’s Division of Privacy and Identity Protection, added, “If we come to your door, be nice. If you don’t know the answer to something, don’t guess. Tell us your story so we don’t have to guess.”

The consequence of not establishing trust can lead to a lot of miscommunication, Rubenstein added. “It’s not that regulators are vindictive,” he explained, “but it may seem so” to an organization. “For regulators, we often don’t know how big the iceberg is—so what you tend to want to do is turn over every stone” to see how deep the privacy problem within an organization really is. Additionally, you’ll often get a more compulsory process—meaning subpoenas, he said.

In effect, the consequence of not building trust with a regulator can drive an agency “to use more formal and coercive processes,” he said, adding, however, “Lack of trust doesn’t necessarily mean this will happen, but it impels” such a reaction.

Lines have been drawn for some time now regarding where U.S. lawmakers are willing to go with preemption provisions in the proposed American Data Privacy and Protection Act. Those lines were defined back in 2019, and lawmakers' willingness to cross them for a compromise is still a tall task neither ...
END_OF_DOCUMENT_TOKEN_TO_BE_REPLACED queue Save This

A new era of children’s privacy rules has arrived. New laws focusing on the safety and mental health of kids and teens will have wide-ranging implications for the design of digital systems. California’s Age-Appropriate Design Code Act, which will go into effect July 1, 2024, is the first law in the ...
END_OF_DOCUMENT_TOKEN_TO_BE_REPLACED queue Save This

On Sept. 2, Ireland's Data Protection Commission issued a landmark decision concerning the processing of children’s data in connection with the Instagram social media service. The decision, issued to Meta Platforms Ireland Limited (Facebook Ireland Limited at the time of commencement of this inquiry...
END_OF_DOCUMENT_TOKEN_TO_BE_REPLACED queue Save This

New York’s Attorney General Letitia James is a longtime public servant who has regularly and repeatedly shown her commitment to protecting consumer rights and privacy. James began her legal career as a public defender for the Legal Aid Society before becoming an assistant attorney general. In 2013, ...
END_OF_DOCUMENT_TOKEN_TO_BE_REPLACED queue Save This

In the past several months, China has witnessed some key regulatory developments in its cross-border data regime. This is evidenced by the promulgation of the long-awaited Measures for Security Assessment of Outward Data Transfer with the effective date of Sept. 1, the release of a new set of TC260 ...
END_OF_DOCUMENT_TOKEN_TO_BE_REPLACED queue Save This