The votes are in: The winning entry for the S*fe H*arbor Naming Contest is ... The Transatlantic Data Protection Framework (TDPF), submitted by Galaad Delval.

The TDPF beat out the other four finalists pretty handily, picking up 34 percent of the nearly 1,000 total votes. The first runner-up was The EU-U.S. Data Exchange, submitted by Robert Niedermeier. The second runner-up was the North Atlantic Privacy Agreement, submitted by Christophe Hug.

As promised, the winning entry will now be officially endorsed by the IAPP as the new name for the to-be-finished data-transfer agreement between the EU and the United States, currently being hammered out between the EU Commission and the U.S. Department of Commerce. Here are the letters as proof: 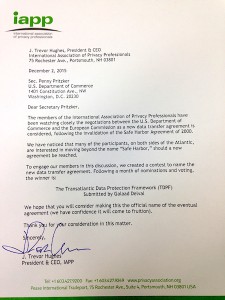 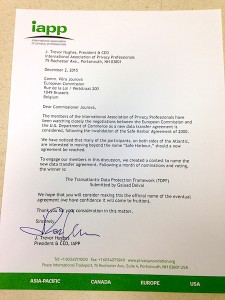 And from now on, that's what we're going to call it. No more "Safe Harbor 2.0" nonsense. From now on, full steam ahead with the Transatlantic Data Protection Framework. Unless they ignore us and call it something else. We'll see what happens.

Also, you're probably wondering who Galaad, our winner, happens to be.

Turns out, he's currently living in Shanghai, China, where he works with the EY Chen & Co. law firm. He is a European citizen, who studied law in France and now wants to make privacy and data protection his profession. Galaad reports that he is currently studying for the CIPP/E and that, "As both the GDPR and the Safe Harbour 2.0 (or maybe one day the Transatlantic Data Protection Framework) will define our right to privacy and the limit on this right, I thought it to be a duty as a European citizen and a legal expert to research these matters to protect both individuals and companies against others and themselves."

Please join us in extending a hearty congratulations to Galaad, as well as wishing him good luck with his CIPP/E exam. And thanks to everyone who participated in the renaming contest. Hopefully, you enjoyed it as much as we did.

3
The nominations are in: Over the past two weeks we’ve received nearly 100 submissions to our contest to find a better name than "Safe Harbor 2.0" for the data-transfer agreement currently being hammered out by the EU and U.S. governments in the wake of the Schrems decision.  And the contest has onl...
END_OF_DOCUMENT_TOKEN_TO_BE_REPLACED queue Save This

While the U.S. and EU haggle through the next iteration of an agreement that would provide a data transfer mechanism, there's one thing we can all agree on: The "Safe Harbor" name carries way too much baggage. Thus, we at the IAPP have decided to create a simple and straightforward naming contest. W...
END_OF_DOCUMENT_TOKEN_TO_BE_REPLACED queue Save This

A conversation on the GDPR's one-stop shop mechanism

The one-stop-shop enforcement mechanism under the EU General Data Protection Regulation proved to be the last hurdle for adoption and has been under debate ever since. Join the IAPP April 26 for this LinkedIn Live event as panelists discuss the one-stop-shop mechanism and offer clarity as to when it...
END_OF_DOCUMENT_TOKEN_TO_BE_REPLACED queue Save This

Roundup: Belarus, EU, US and more

In this week's global legislative roundup, IAPP Staff Writer Joe Duball provided an update on the Florida Senate's efforts to pass privacy legislation. Data protection authorities from around the world have taken action in the wake of Facebook's data breach involving more than 530 million users. The...
END_OF_DOCUMENT_TOKEN_TO_BE_REPLACED queue Save This

Politico reports on the potential collaboration issues with the EU and U.S. regarding artificial intelligence. The European Commission plans to introduce legislation on AI this month, and its stance could conflict with how the U.S. approaches the technology, particularly after a BuzzFeed News invest...
END_OF_DOCUMENT_TOKEN_TO_BE_REPLACED queue Save This