The Center for Geographic Analysis held its annual conference at Harvard’s Tsai Auditorium last week, focusing on the challenges and thoughts surrounding policy-making for a location-enabled society.

The benefits of location technology are hard to deny—identifying influenza outbreaks, getting necessary transportation to people in remote locations, providing emergency services to people that call 911 from cell phones, heck, even just figuring out how to get home without being stuck in rush-hour traffic—but the collection, analysis and use of this data bring risks, too.

In order to offer these services to users, companies and governments have access to their location, and combined with other information tied to their mobile devices, the privacy risks can get steep pretty quickly. 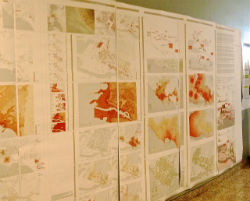 For example: Imagine, what Hitler would have done with this kind of data.

Ebele Okobi, global head of Yahoo’s Business and Human Rights Program, asks, “What happens when a government is broken,” when what a government considers a public good contravenes international human rights norms? And as the repositories for this data, what do we want the role of the company to be? “What do we do when we're in the middle of a public good and an international human rights issue?”

Harvard Data Privacy Lab Director Latanya Sweeney opined that in the past we’ve looked at privacy concerns from the perspective of re-identification, but that needs to change. We need to either align the risks and benefits or limit the risks. But how?

Industry and government consultant Jeffrey Harris noted, “As we have learned not to shout fire in a crowded theater, we are learning how to use data processing for public good.”

The government will not figure out this technology on its own, said Harris. The job of industry and the people who understand geolocation is to inform the debate—and we cannot halt the innovation or stop reaping the benefits from this technology while waiting for the government to catch up, others added.

Confounding the issue, according to Prof. Stephen Goldsmith of Harvard, is that we have a situation where the government is both the regulator and the user of this data. “We could do so much good with the data we have now,” he said. He cautioned against letting the problems paralyze the benefits. 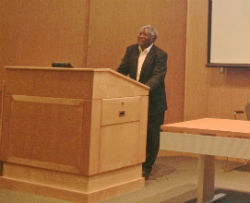 Government usually lags behind industry; new technology is developed; people adopt it; there’s public debate and, finally, government regulation. And while this is nothing new, Greg Scott, inter-regional advisor on Global Geospatial Information Management in the United Nations Statistics Division, says the gap between lead and follow is increasingly wider.

So what should be the role of the government in a location-enabled society? Enabler? Leveler of the playing field? Creator of standards?

Nigel Jacob, co-founder of New Urban Mechanics, says these questions of policy should be part of the experiment itself, and many agreed. “We need to revamp the structure of policy-making,” Jacob said, adding this would be a good role for local governments.

Polarized politics and large government make it difficult for the U.S. to take this approach at a federal level. There needs to be a “co-evolution of policy, technology and the consumer,” said Alex “Sandy” Pentland of MIT.

But that’s not the end of the story. Technology marches on. “It's not possible to conceive of a policy that could keep up with exponential growth of technology and data,” said closing speaker Calestous Juma, professor of the practice of international development and director of the Science, Technology and Globalization Project.

The question remains, what happens when the technology is flying free while the policy is still waiting for its wings to dry? Who’s getting hurt?

The California Privacy Protection Agency Board outlined a proposed course of action for the upcoming California Privacy Rights Act rulemaking process, addressing what will and will not be anticipated areas of focus. The board did not discuss the quickly approaching July 1 target date for finalizing ...
END_OF_DOCUMENT_TOKEN_TO_BE_REPLACED queue Save This

After eight years at the helm of Canada's privacy regime, the time has arrived for Privacy Commissioner of Canada Daniel Therrien to pass the reins. The longtime civil servant will leave his post June 3, allowing him the opportunity to speak candidly for the first time about the state of Canadian pr...
END_OF_DOCUMENT_TOKEN_TO_BE_REPLACED queue Save This

As the EU General Data Protection Regulation celebrates its fourth anniversary since going into effect May 25, 2018, enforcement of the world's most comprehensive data protection regulation is still evolving.  No doubt, data protection authorities in the EU have been busy during the last four years...
END_OF_DOCUMENT_TOKEN_TO_BE_REPLACED queue Save This

EU institutions have recently reached a political agreement on the Digital Markets Act and Digital Services Act. These regulations are set to have far-reaching consequences for the digital economy, particularly on how data is collected and processed for online advertising. The European co-legislator...
END_OF_DOCUMENT_TOKEN_TO_BE_REPLACED queue Save This

There has been curiosity about how long it would take the U.S. Federal Trade Commission to delve into privacy matters once it had a full bench of commissioners and a Democratic majority. The answer took only three days as the agenda for the first public session following the swearing in of Alvaro Be...
END_OF_DOCUMENT_TOKEN_TO_BE_REPLACED queue Save This