In previewing his talk at the IAPP Europe Data Protection Intensive, Big Data thinker Andreas Weigend equated Big Data with Big Oil. At the very highest levels, he argued, both are essentially worthless without refinement. 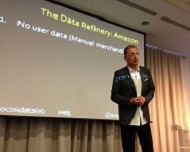 There is, of course, a key difference: “We’re not going to run out of data anytime soon,” Weigend told the crowd in London. “It’s maybe the only resource that grows exponentially…Maybe every 1.5 years we’re seeing data double, and much of that data is social data, data about ourselves.”

In order for the economy to capitalize on that abundant resource, he said, that personally identifying data is going to need to flow freely.

“I am not a lawyer,” he said to a room with a number of lawyers, “but is it true that in the EU you want to make it difficult for people to keep that identity?” Referring to the draft regulation, he wondered, “Is it true that some people want to move to an opt-in, where instead of companies being able to build these social business models that power the economy, you want to kill that? Do you want to just declare bankruptcy and let the Chinese come in and do it for you?”

He was being dramatic for effect, but he demonstrated for the audience quite clearly the shifting opinions on personal information when he popped up a slide showing the file the secrete police in East Germany once kept on him in the 1980s. “Now people share information on Facebook that the KGB would not have gotten out of them under threat of torture,” he said. “I’m trying to figure out why.”

“I hope I can understand a little bit more how we’ve moved from the e-business world where the company is in the middle, to a me-business, where the consumer is in the center, making RFPs,” he said of the new business paradigm.

Previously, the company would create offerings, and the customer would choose among them. Now, by sharing personal information, the customer can, in effect, put out a request for an offering, and a company can serve up a more perfect product designed for that very consumer.

Eventually, he said, we may find ourselves in an era of “we-business,” where each consumer broadcasts a set of abilities and desires, and everyone is a potential supplier and purchaser, companies and individuals alike.

He used as an example web sites like www.HomeAway.com, where people can post their spare bedrooms for rent and customers can elect to rent those rooms instead of those offered by hotels. Of course, there’s something a lot more personal about renting out your spare bedroom than the accepted practice of staying in a traditional hotel.

Is it possible that privacy law, in the direction it’s currently heading, could stifle this kind of innovation?

In her opening remarks at a Future of Privacy Forum event in February 2021, U.S. Federal Trade Commission Acting Chairwoman Rebecca Kelly Slaughter previewed for the first time her enforcement priorities under the new Biden administration. Slaughter emphasized "meaningful disgorgement" as a key reme...
END_OF_DOCUMENT_TOKEN_TO_BE_REPLACED queue Save This

The Council of Europe’s Committee of the Convention for the Protection of Individuals with regard to Automatic Processing of Personal Data, or Convention 108, issued a statement regarding the need for strong data protection for COVID-19 vaccination programs and vaccine certificates. Germany's Fed...
END_OF_DOCUMENT_TOKEN_TO_BE_REPLACED queue Save This

In conjunction with the release of its “We Need to Talk About Data: Framing the Debate Around the Free Flow of Data and Data Sovereignty” report, the Internet & Jurisdiction Policy Network discussed key messages with World Economic Forum Data Policy & Governance Lead Anne Josephine Flanagan....
END_OF_DOCUMENT_TOKEN_TO_BE_REPLACED queue Save This

Denmark's data protection authority, Datatilsynet, announced updates to its guidance on consent under the EU General Data Protection Regulation. Notable updates include clarifications on consent for processing by public authorities and how swiping or scrolling through a site "is not considered an ...
END_OF_DOCUMENT_TOKEN_TO_BE_REPLACED queue Save This